On the 6th of September, a group of eleven undergraduate students and their FAI leaders embarked on a trip to a country that has only recently opened its doors to the rest of the world. We were on our way to Burma.

Our first stop was Burma's former capital, Yangon. Burma is now called Myanmar, and Yangon was formerly Rangoon, but Americans still refer to the country primarily as Burma. Once there, we took a walking tour of the town, which included visits to numerous pagodas with lessons in Burmese history. We had the opportunity to visit Shwedagon Pagoda, which, according to ancient legend, is one of the oldest pagodas in the world. As a towering stupa covered in gold leaf, the 344-foot tall pagoda was awe-inspiring for all of us.

The second day in Burma, however, was vastly different. We woke early in the morning to leave Yangon for our first village stay. Our journey included a four-hour bus ride, with a stop to visit the District Authority and meet local and district officials and a visit to the local Catholic school. After a two hour open-top boat ride in drenching rain which Aaron Griffith '14 compared to Apocalypse Now, we finally arrived. The villagers were ecstatic, as they had never before received foreign visitors. We were welcomed with song, dance, and more food than could ever be eaten by a group of fourteen people. Colleen Fisher '14, said,

"The hospitality we received both at the village and throughout the whole country was amazing, and makes you step back and look at how our society treats each other, as well as outsiders."

The elder monk of the village welcomed us to his home and shared thoughts on the village and Buddhism. Everyone, both visitors and locals, took a walk to a rice paddy just as the sun was setting, and then headed back to the village for dinner before turning in for the night. The next day, we woke early to offer breakfast to the elder monk and he led us in meditation. Our group visited schools and a rice mill before leaving the village on the boat (luckily in the sun this time!) and headed back to Yangon where we all went to bed early and prepped for the early morning flight to our next destination. 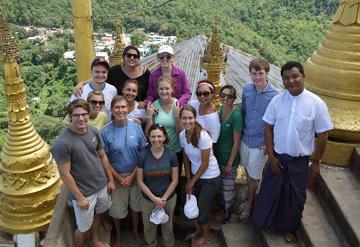 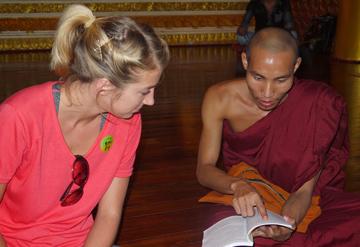 The second stop in Burma was Bagan, the country's plain of ancient pagodas. The first day was filled with pagodas: brick pagodas, gold pagodas, pagodas you could walk inside, and more! We were even able to climb to the top of a pagoda and gain our first real glimpse of Bagan. The panoramas were unbelievable and there were pagodas as far as the eye could see. The day ended with a sunset boat ride along the Irrawaddy River and dinner as a group. The following day began with a visit to the top of a pagoda just as the sun was rising. This was followed by a stop to a local palm sugar factory and peanut farm where we saw the traditional Burmese way for making peanut oil and extracting palm sugar. We then traveled to Mt. Popa and climbed 800 steps surrounded by monkeys to Taung Kalat, a hilltop shrine with breathtaking views. That night, we were given free time so five of us decided to take a taxi to go to a pagoda and watch the sunset. We climbed up to the top of the pagoda about half an hour before the sunset and immediately knew we made the right choice. The sunset was absolutely beautiful and lit up the entire sky. There was a lightning storm in the distance as well, which made it even more beautiful. The other students and I were having such a good time that we didn't realize it had gotten dark and the temple officials needed to ask us to leave. It was one of those life moments that I know none of us will ever forget.

The last day in Bagan was a beautiful one as well, in a much different way. We visited PACT, a micro-finance organization that has bettered the lives of many women and their families in Burma. It exists all over the country but we visited the Dry Zone branch. We were invited to meet with more than 200 women who have received loans from this organization. It was a humbling experience for all of us because they were all so welcoming and happy that we were there. We were divided into small groups and, with the help of numerous translators, were able to hear individual stories of women whose lives were changed by the money they have received through micro-finance. We also visited the shops of multiple women who had received loans from PACT and saw firsthand how the program is making a difference. It was truly amazing to see the change that this micro-finance organization was making. We first talked to those who ran the organization and they presented an overview of the project, but meeting the women who were empowered by the loans and hearing about their lives, both before and after they received the loans, was completely different.

The third stop in Burma was the Inle Lake region. We started with a hike in Pindaya, a local town consisting of multiple villages. In order to get to the monastery where we would be staying for the night, we first had to hike up and down slippery slopes in intermittent rains for more than four hours. While this made for a long day, it was easily one of the most memorable experiences for all of us. We were able to see a whole new side of Burma as we walked by homes and farms in the mountains and observed everyday life for the people who lived there, which was different than in other places we visited because of the village's remote location. The hike finished at the monastery where we talked with the village leader, the head monk, the village midwife, and other local people about their lives in Burma. Jamie Monk '16 said

"It was really interesting seeing how their micro-economy is managed and seeing the different systems used compared to the United States, especially with regards to local government."

For the next two days, we took to the water and headed out onto Inle Lake. These days were filled with activities including visits to a local home built on stilts over the lake, a Burmese Cat Village, a local pagoda, lotus weaving shop, multiple local food shops, and more. We also learned a lot about fishing and farming on the lake. We stopped by the boats of some local fishermen and watched how they row and fish. Some of us, myself included, even tried it out for ourselves and found that it was much harder than it looked. We were even told to wear life jackets as we tried it, since they figured that we would fall in! Luckily, none of us did. 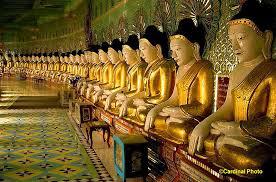 In addition to fishing on the lake, there is a lot of farming as well. We stopped at a floating garden, which is a piece of land basically floating on the edges of the lake, and in the late tributaries where people grow all of their vegetables. We were able to step onto the island and see what farming would be like if we were to farm there. The farmers gather up lake-bottom weeds from the deeper parts of the lake, bring them back in boats and make them into floating beds in their garden areas, anchored by bamboo poles.

The trip was one of the most memorable and lasting experiences that the group and I have ever had. We made so many memories and learned about such a vastly different way of life, and our timing was impeccable. Lynsey Palmer '14, another member of our group expressed the feeling of the trip well, saying "As Myanmar becomes more and more developed, I realize that many of the experiences we had will never happen again," and she's probably right. We are all so grateful to be able to share this experience with each other and are thankful to FAI for the opportunity. 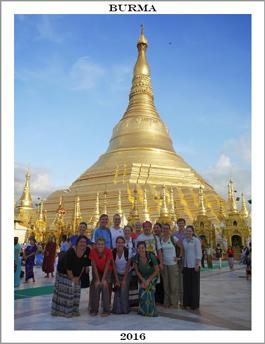 Southeastern Asia, bordering the Andaman Sea and the Bay of Bengal, between Bangladesh and Thailand