During the FAI’s most recent immersive study trip in September, fourteen undergraduates and two faculty members navigated Western Cuba. With a goal to realize unique outcomes of Cuban economic development, namely in sustainable agriculture, the group visited numerous urban and rural farms that implement sustainability across all aspects of agriculture. At the first farm toured in Cojimar, not far from where the timeless movie, “The Old Man and the Sea” was filmed, the students were introduced to permaculture and its core belief, which is “not to identify problems, but opportunities.”  Resonating beyond this era and that idyllic seaside farm, this truism has pushed forward Cuba’s agricultural sector since the Soviet Union dissolved in 1991. The ensuing isolation, famine, and hunger that crippled the largest island in the Caribbean produced one of the world’s most sustainable food systems, indicating that the “Special Period” did not tarnish Cubans’ imagination, rather it cultivated a culture of innovation and environmental stewardship that remains unknown to many Americans.

The students quickly understood the importance of permaculture when learning about Cuba’s “Special Period.” At the Antonio Nunez Jimenez Foundation outside Havana, an economist shared startling facts reflecting Cuba’s reliance on the Soviet Union. For example, in 1989 the USSR provided Cuba 1.4 million tons of fertilizer, but in 1993 Cuba had access to only 250,000 tons of fertilizer. This event and others led a collapse in food production, and hunger overtook daily living. What enabled Cuba’s food production to rebound can be partially explained by the development of organic farming and permaculture sites. The next paragraph will present the creative ways that allow Cubans to now sustainably feed themselves.

Each farm offered an original product or system never seen before by the students. The aforementioned farm in Cojimar operates the only ecological car wash in Cuba in addition to providing workshops for children. Their most popular program involves students building scarecrows from scraps found on the nearby beach. Not only are those scarecrows used for protecting the farm’s produce, but they are also used for providing a narrative on relationships, gender identity, and sex education. In Sancti Spiritus, a city south of Havana currently celebrating its 500th anniversary, a permaculture site slightly larger than a tennis court utilizes 170 tires to mimic terraced farming and establish systems for composting. The tires act as barriers, maintaining plant diversity. Finally, Cuban ingenuity presented itself through dry toilets, an ingenious device that creates fertilizer from human waste. This mechanism reduces costs, prevents pollution, and allows any person regardless of farming aptitude to participate in sustainable farming.

The farmers emphasized to the students that permaculture is more than sustainable food production, it is a philosophical view of life. The students saw this philosophy applied through permaculture’s implementation of education, community engagement, and utilizing items deemed useless such as used bottles, tires, and rice husk. These types of actions make daily living enhance the environment and people come together for a purpose that benefits everyone. Problems become opportunities and the imagination becomes substance. 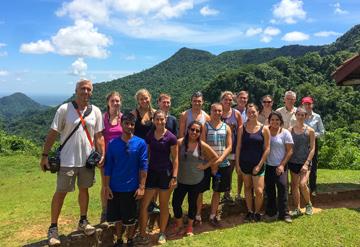 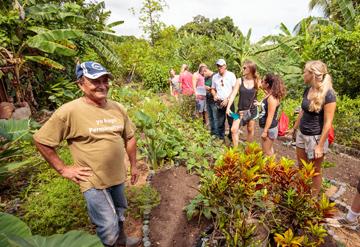 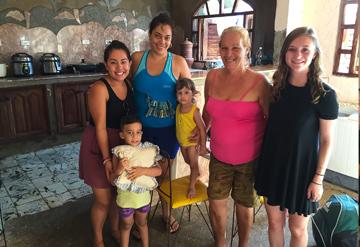 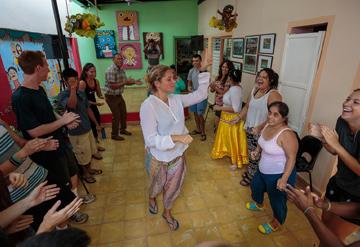 It only took two days for me to give up on the idea of coming to a final judgment about Cuba.

As a group of American students, we naturally wanted to draw a comparison between these two countries that, in many ways, represent opposite ends of the spectrum. However, making clear-cut judgments about which aspects of each country are “good” or “bad” proved an impossible goal, since everything became a matter of perspective.

“I think the trip challenged us to look at things critically. It’s easy to look at the differences between other countries, but it’s really important to think about ways that we’re similar,” said Lauren Liu ’15.

In Cuba the layers of truth, reality, and opinion create a jumbled web that we only began untangling during our two-week immersion trip. After a few days we already felt anxious to know where the truth lies. We started to get the sense that no one—in Cuba or elsewhere—actually knows what’s going on around the island. The reality we came to know is that uncovering the truth in Cuba is complicated.

“It’s difficult to distinguish between what opinions you made yourself versus the ones that were influenced by outside forces like what you’ve read and opinions of the other students or of the Cubans,” said Lauren Liu ’15.

Students on the trip agreed that what we had studied about Cuba back in the U.S. wasn’t necessarily the full picture. The information we received from books, websites, speakers, and news reports were all largely based on the personal viewpoint of each author. A variety of experiences and opinions make up the reality of Cuba, and people cannot be easily separated from their biases.

“While in Cuba, I tried to always remember what our guide asked us on our first day, which was to see Cuba with open eyes and an open mind. It helped me look at Cuba without my previous perception,” said Max Williamson ’15.

The knowledge we gained in the classroom is best described as a mismatched patchwork of statistics, opinions, and representations of history that competed with one another to accurately depict the country. Comparing this impression to the information presented to us once we got to Cuba painted an entirely new picture, full of complexities and gray areas. Motivated to uncover the truth, we grew accustomed to asking our constantly growing list of questions and then wondering which the responses were valid.
Take the case of Internet access in Cuba for example.

One Cuban told me that when the United States constructed the Internet cables running beneath the Atlantic, they purposefully diverted around the island, making connection difficult for them.

“That’s what the Cuban government wants the Cubans to think,” responded an American journalist with a smirk and an air of frankness that fit his hardball New Yorker vibe.

A 22-year-old university student gave me a confused look when I asked about it. She asserted that Cubans have full Internet access; it just loads slowly due to the dial up connection.

And so is the story with every subject relating to life in Cuba.
“

While trying to figure out the true reality of Cuba I began to question the sources of information that I have used my whole life. I became aware that the truth was probably somewhere in the middle. The best I can do is learn all that I can, talk to as many people as I can, and evaluate for myself,” said Tony Ferrari ’15.

The bright side is that Cubans love to share, so we never had to search far to get our questions answered. Walking down the streets, locals regularly stopped us wanting to know where we were from and what we were up to. After feeding their curiosity, Cubans were more than happy to return the favor, always eagerly sharing their lives and experiences with us.

“Going to Cuba, I think I expected some sort of perspective change. However I had no idea what was in store. I was pleased to experience such a beautiful place and welcoming people,” said Tony Ferrari ’15

Perspective is everything in Cuba.  The important thing for us as students was to approach the experience with open minds and the overall goal of understanding the diverse viewpoints that together paint a picture of reality. Cuban, American, emigrant, politician, journalist, artist, student: everyone has their own story to tell about life in Cuba.

All of these stories helped us build new perspectives of a place that used to be so foreign to each of us. To us, Cuba no longer means just an island off the coast in Florida. It’s a place where we learned, grew, and built connections with the people and the land. It’s a place different from our own country, but that we can now understand through a new perspective.

The Food and Agribusiness Institute is looking forward to our immersive study trip to Cuba in September 2014.

The goal is to increase students’ understanding of the challenges associated with equitably distributing the rewards of economic development within the socio-cultural and environmental contexts of a low-income Latin-American country. The trip will take place September 4-18, 2014.

mostly flat to rolling plains, with rugged hills and mountains in the southeast