In Art We Trust

What is the role of music in times of crisis?

What is the role of music in times of crisis?

In my “Anthropology of Music” class this quarter, my students and I have been discussing the role of music and art in times of crisis. We’ve found it hard to talk about anything else, frankly. They have expressed how they miss making music in person with their peers and teachers. Some have lamented their lack of motivation to practice their instruments, while others have decided to take up new instruments. Their listening practices have shifted. They want to listen to music that matches their emotions. Sometimes they listen to music just to feel something - to emote. They listen to artists that remind them of hanging out with their friends in a more normal time. In this way, they listen to remember. And many students are also deepening and expanding their listening practices as a way to “journey” through sound in a time of sheltering in place. They’ve been exploring music from different regions of the world - Egypt, Cuba, France.

They have also been more attuned to their changing sonic environments. One student who studies musical composition said that the birdsong in his backyard in Half Moon Bay has inspired him to compose new kinds of music. Another student, Sophia Flores, in New York City, reminisced about the comforting cacophony of urban noise she used to hear outside her home. She has not gotten used to the silence. She looks forward to the eruption of sound that now ignites the city every night at 7 PM in honor of all the health care workers. Residents applaud, whistle, shout, bang on pots and pans. In one recording she sent me, you can hear someone playing Frank Sinatra’s “New York, New York” amidst the raucous. The city that never sleeps now slumbers, but it awakens for a few minutes every night in a ritual of sonic praise.

What is the role of music in times of crisis? I started to think about SCU’s Frank Sinatra Artists-in-Residence from 2016-2017, the Silk Road Ensemble, and the perseverance of these musicians to make music in the face of challenging political circumstances and violence in their home countries (from Mao’s Cultural Revolution to the Iranian Revolution of 1979 to the Syrian Civil War to 9/11). And so last week, I had my students watch the documentary about the Silk Road Ensemble, The Music of Strangers. In one scene, Kinan Azmeh, a Syrian clarinet player, questions: “Can a piece of music stop a bullet? Can it feed somebody who’s hungry? Of course, it doesn’t.” Many students were drawn to this quote. One of them asked, “How can I even think about having a career in music when what the world really needs is doctors?"

The Music majors and minors, in particular, are wary of pursuing musical professions in a world where the future of live music is so uncertain. Similarly, many of Silk Road’s members questioned the viability of such a musical project in the wake of 9/11, but they collectively decided to counterbalance the horrors of life with music - to take revenge with beauty, as Argentinian composer Osvaldo Golijov states in the film. Ultimately, this was our take-away from the film: music’s power to provide healing, catharsis, and connection during times of chaos, war, and sickness.

Another SCU Sinatra Artist-in-Residence has been working to affirm the vitality of art in this moment. Rhiannon Giddens joined with musician Amanda Palmer and author Neil Gaiman to create Art Is Alive, a new online resource guide to support artistic and creative freelance communities whose livelihoods have been so greatly impacted by the COVID-19 pandemic. On their website it reads:

Everything is critical now, and so is Art.
We can’t eat art, but it feeds us.
Art is the glue that ties us together.
Art is what makes us feel real.
Art is not an excessive luxury.
ART IS A MUST.
IN ART WE TRUST.

In my own family, we have been taking to the streets of Berkeley with music. My husband, who is a firefighter-paramedic, plays the Scottish Highland Bagpipes (which have turned out to be an ideal quarantine instrument in so many ways). A few times a week at sundown, my two kids and I process with him around our neighborhood. These moments feel sacred. Folks peer their heads out of windows or come to their porches to listen and wave in gratitude. Some clap or stand in silent reverence. Others have joined in the procession, adding in a saxophone or snare drum, trailing 6ft behind us. This is the music of strangers, of people connecting to a common throughline of humanity - a constant and primal drone.

When words fail, when government fails, when our bodies fail, sometimes music is the only thing that can express the complexity of emotion and the profundity of grief that lives inside of us. In art we trust. 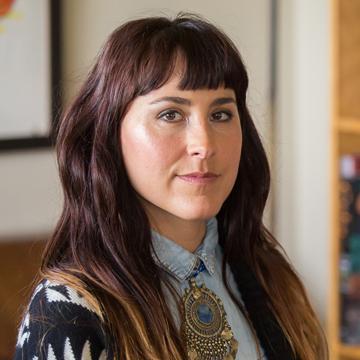 Christina Zanfagna is an Associate Professor of Ethnomusicology at Santa Clara University. Her research focuses on music’s relationship to religion, race, and geography in urban America. In her book, Holy Hip Hop in the City of Angels (UC Press, 2017), she explores the cultural politics of gospel rap in Los Angeles. Christina is also a flamenco dancer, performing regularly with the East Bay collective Oakland Flamenco Sessions.