B. A. – Chemistry and Biology, University of California Santa Cruz

Work in my research laboratory focuses on examining physiological, biochemical and molecular mechanisms by which animals respond to environmental change. The fundamental questions we ask are: Why do organisms live where they live, and how do they do so? What causes populations to remain stable, grow, fluctuate in size, or go extinct? How does the physical environment, the presence predators, the genetic properties of a population and the abilities of individuals to adapt to the environment all influence their distribution and abundance? As ecosystems experience rapid climate change, it is imperative to understand and address these questions in vulnerable natural populations.

The primary study system in which we explore these questions are populations of the native willow beetle Chrysomela aeneicollis, which experiences extreme climatic conditions in the Sierra Nevada Mountains of California. We are characterizing Sierra beetle populations using molecular markers of genetic variation and environmental adaptation. We are also assessing changes in population size and distribution using these genetic markers, and linking changes to local topography and to climate, which we assess using locally deployed loggers and weather stations. Because we have been studying these populations for over 20 years, we are able to include historical samples from populations that are now extinct in our analysis, which offers us the rare opportunity to analyze changes in populations for which the past environment is characterized. We are also conducting experiments to quantify fecundity, larval survival, and adult over-wintering survival to assess potential mechanisms contributing to population persistence for beetles of differing genetic and environmental backgrounds. 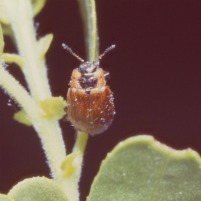 We also study the adaptive significance of color polymorphisms in coastal populations of leaf beetles. In California, temperatures in the coastal region vary greatly over relatively short spatial scales, with cool, moderate conditions prevailing along the coast and inland valleys, and warm conditions with greatly fluctuating temperatures prevailing inland and along the tops of ridges in coastal mountain ranges. California populations of the leaf beetle Chrysomela schaefferi occurs along the California coast and in the coastal mountains. Melanic (darkly-pigmented) and light-colored forms are found in this beetle species. Melanic individuals are deep brown, non-melanics copper colored. Melanics are found in higher frequency in cooler habitats than further inland, where maximum temperatures are much greater. Some authors propose that melanism represents an adaptation to temperature in other insect systems, but few have investigated physiological mechanisms supporting the thermal melanism hypothesis. We are studying temperature adaptation in this beetle, focusing on how changes in temperature interact with color pattern and genetic variation to affect factors altering performance and reproductive success: heat shock protein expression, running speed, fecundity and mating frequency.

The heart of this research program are the efforts of undergraduates, who work intensively in the laboratory and field as a collaborative, interdisciplinary team. Team Beetle. This research is currently funded by the National Science Foundation, a Clare Booth Luce Fellowship, an SCU undergraduate research grant, and a Fulbright Scholarship. 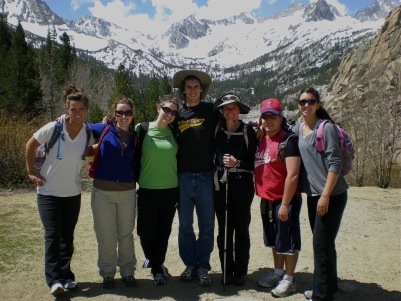