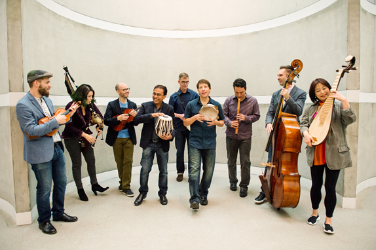 Starting on May 1, the Frank Sinatra Artists-in-Residence Silk Road Ensemble musicians spent a final week at Santa Clara University focused on their theme, “Comings and Goings: Exploring Place and Home.”  Many of the Ensemble members commented throughout their Residency on the relevance of the theme as they participated in classes, events, and concerts around campus, particularly those related to immigration issues. But their theme also grew personal for the Ensemble, for as percussionist Shane Shanahan noted during the final blowout concert, “We really found a home here [at SCU].”

Santa Clara’s faculty, students, and community warmly embraced them as well.  Each of their days were packed with activities – they visited a Chinese Philosophy class, Music Theory courses, and sat in on the Chamber Singers rehearsals throughout the week. One of the highlights for Galician bagpiper and pianist Cristina Pato was speaking with the students at Washington Elementary School – an event made possible through SCU’s Thriving Neighbors Initiative. Pato noted that, as an immigrant from Spain, she was so happy to realize that there was a strong immigrant presence in California as “twenty-nine of the thirty students could also speak Spanish!”

Of course, the Grammy Award-winning Silk Road Ensemble, led by artistic director Yo-Yo Ma, didn’t just reflect on the theme of “home” through classes and talks—their music also explored a global array of sounds. On Wednesday, the Silk Road Ensemble members collaborated with several SCU Music faculty during the weekly “Music@Noon” concert. The Terry Riley piece they played, “In C” was, as the story goes, written on a single bus ride in San Francisco as a “rebuke to academic music.” Violist Nicholas Cords explained that since the piece involves 53 cells of rhythmic or melodic patterns that repeat and focus on the “pulse of C,” there is no set way to play this song. “This piece is a complete journey,” Cords said. “It can’t just be a piece that happens to you—you bring yourself to it.”

Cords encouraged the audience to “be in the song” with the musicians and to sing along, if the spirit moved them. And the full Recital Hall certainly hummed throughout “In C,” thanks to the spirited rendition of the piece. Bagpiper Cristina Pato startled the crowd as she burst through the doors halfway through the piece and played her way around the room and, later, across the stage. Her sound blended with that of the other instruments: from the more Western influence of a piano and flute, to world instruments like a Japanese-influenced marimba and a traditional Chinese sheng, a precursor to the mouth organ. While some laughed in delight at Pato’s entrance, by the end of the performance, the audience rose in unison to offer a standing ovation.

Sophomore Kevin Roth-Ramsdell, in particular, was deeply moved by the fifty-minute concert. “As a person with ADHD, the piece really resonated with me,” he said. “Sometimes it was easy to balance two or three different instruments' melodies at once, and other times, one would jump from the background to the foreground. It felt like somebody has turned my jumbled, chaotic thoughts directly into beautiful, moving music.” Pato would be pleased with his understanding of the song, for as she explained during the Q&A, “This piece is about listening and hearing. We bring each other together through music. […] As an immigrant, I feel we really have to make a bigger effort to listen to others, just as I did [in the song].”

This experience of listening and collaborating continued Friday evening with the Blowout Concert. The opening piece, for example, “Fanfare for Gaita and Suona” featured a playful call-and-response from across the stage between Cristina Pato on her bagpipe and Wu Tong on the suona, a double-reeded Chinese horn. Each of the Silk Road Ensemble members also had the opportunity to share a reflection throughout the program, explaining the music, their instrument, or their inspiration to write a piece.

The musical selections the Silk Road Ensemble picked reflected a wide range of styles, from jazz to flamenco, and even traditional religious chanting. Sandeep Das particularly wowed the audience with several incredible performances on the tabla, an Indian percussion instrument similar to the bongos. After intermission, the Silk Road Ensemble treated the audience to several guest performers. The “Duo” performance featured Wu Tong on the sheng with Wang Fei playing the guqin, China’s oldest string instrument. Several SCU students and faculty, including pianist Bill Stevens and flutist Ray Furutacontributed to the performance as well.  Santa Clara’s own Chamber Singers, directed by Scot Hanna-Weir, also offered a traditional South African song, “Indodana” and then collaborated on the final piece of the evening, “Waterway.”

Throughout these performances, the musicians emphasized the idea Cords introduced at the beginning of the concert, “We’re all travelers. We engage with others when we learn to truly listen to the music.” As the audience laughed, clapped, swayed, and marveled throughout the evening, it’s clear that Santa Clara University’s community was listening. Thanks to the Silk Road Ensemble’s Residency, we now have a deep appreciation of all the ways in which music can teach us about our home. 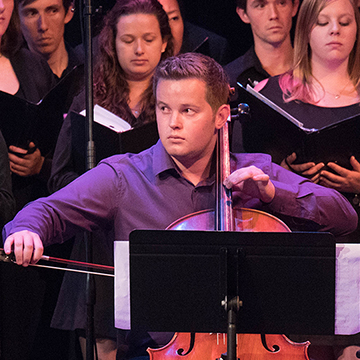 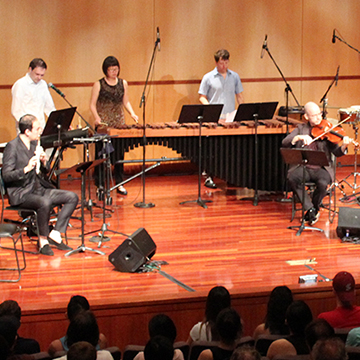 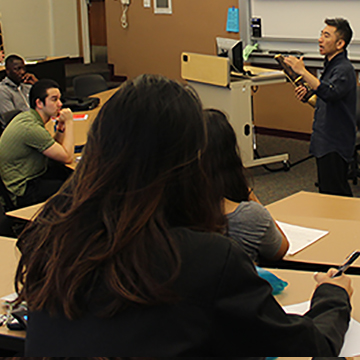 The Music Department had a wonderful time hosting the Silk Road Ensemble as featured guest artists of the 2017 New Music Festival.  Supported with generous funds from the College of Arts & Sciences Frank Sinatra Chair, the residency included workshops, class visits, forums and rehearsals, and culminated with a concert on February  3rd, 2017. Check out this review from the Santa Clara Weekly with the highlights from their recent visit. 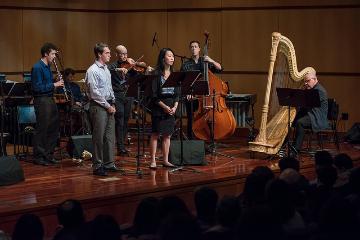 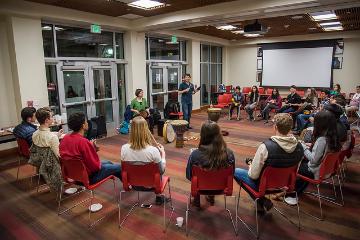 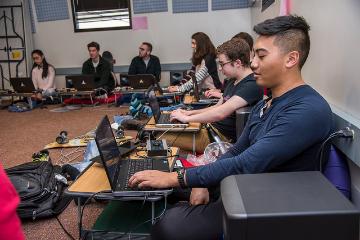 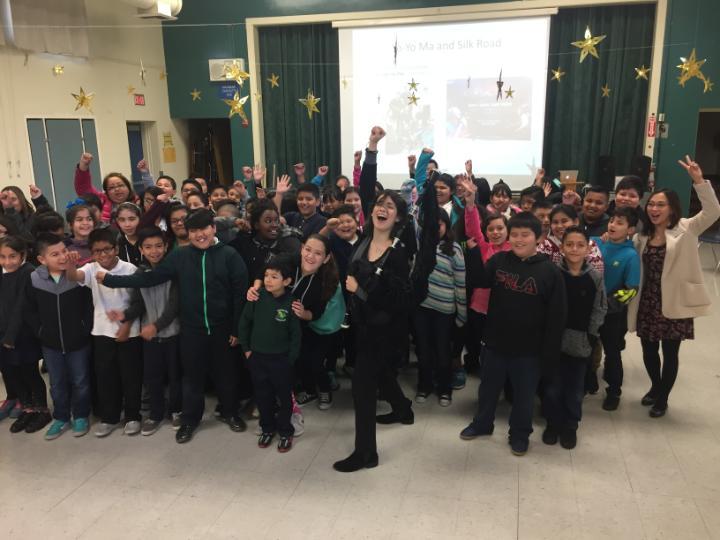 Silk Road Ensemble member Cristina Pato visited the Washington School while here at SCU for the New Music Festival. She shared her enthusiasm for music with students and introduced them to the Galician bagpipes.

"Wow! That was the best assembly I ever [attended]. Thank you for coming!"
"It was very interesting because I had never seen a bagpipe...it was an awesome experience."
"One interesting thing was that in Spain they play the bagpipes and I never knew [that]."
"Cristina said that men were the ones who played the bagpipes but her family owned a set of bagpipes and all of the women of the family learned how to play it."