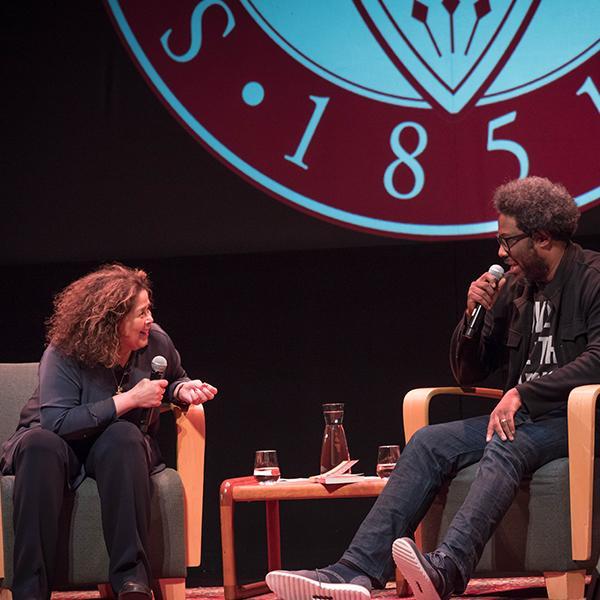 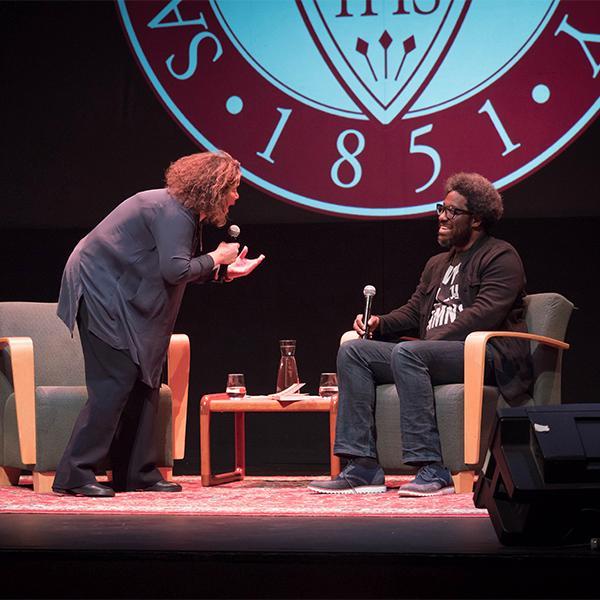 Sinatra chairs Smith and W. Kamau Bell return to explore the creative process behind Smith’s play Notes from the Field.

It’s one thing for a kid to pee in a water cooler at school. But threaten him with jail?

That incident in Baltimore so incensed her it became the catalyst for her one-woman play Notes from the Field.

The conversation at Mayer Theatre between Smith and Bell—both are known for their keen sociopolitical commentary—followed a special screening of the 2018 HBO film adaptation of Smith’s play. The event was also a reunion for Santa Clara: Each has served as the Sinatra Chair in the Performing Arts at the University, Smith in 2016–17, and Bell 2017–18.

Their appearance onstage before 400 students, faculty, and staff, as well as local high school students and members of the larger community, was a rare opportunity to learn about the creative process behind Smith’s acclaimed production, which focuses on the school-to-prison pipeline. The term refers to a system that targets mostly poor students of color who, because of increasingly harsh policies, find themselves pushed out of public schools and into the juvenile and criminal justice system.

“Whatever happened to mischief?” a friend asked Smith in bewilderment when told of the Baltimore school boy’s prank and threatened punishment. “What happened,” Smith explained, “is that rich kids get ‘mischief’—and poor kids go to jail.”

That sense of injustice is at the heart of the play in which Smith brilliantly takes on 18 characters who are somehow connected to the pipeline. She morphs into the Baltimore deli worker who videotaped police arresting Freddie Gray in 2015, then dragging him into a van, where his spine was later severed. She steps into the shoes of Stockton, California, mayor Michael Tubbs, where hopeless teenagers living in the city’s segregated areas tell him their goal in life is just to make it to age 25.

“I say I arrive when the journalists are all gone,” Smith said about her plays that blend theater, social commentary and reportage. “Everybody has packed up their trucks, but the problem is still alive, and sound bites aren't going to take care of it. The media weren't looking at this.”

She hopes the American public may finally be paying attention. So does Bell, who was astounded that Smith conducted 250 interviews for the play, yet only 18 people are featured.

“The amount of work that it takes to commit to that and not go, ‘Well, I did four or five interviews—that seems like enough.’ Why do you feel the need to do all that work that is unseen?” Bell asked her.

The playwright and actor told him no one person has the whole story; she must search for the people who can talk to her about a range of subjects until she finds the right mix.

But what about the rest of the interviewees? Bell asked. Doesn’t she hear back from people who say, “But I thought you and I had such a good conversation … You were laughing … and I said that thing … you wrote it down … I was sure I was going to be the star of the show!”

Smith chuckled and said, “My guess is that some of the people I talked to are relieved they’re not in the show.”

Bell, whose comedic work focuses on racism, social identity, and inequality in America, also wondered about the emotional toll of her work.

“There is an incredible amount of pain and suffering in this material,”  she acknowledged. And yes, compassion fatigue comes with the territory. But, she said, “If I believe that words are powerful—which I do—and if I believe I can find America by sayings words, I do take on those words. And it ain’t easy.”

About those words, Bell was curious: Does she feel more pressure trying to capture the essence of an easily Googled, prolific public speaker like NAACP president Sherrilyn Ifill, whose character kicks off the play?

The playwright said the technical part of creating her portraits relies heavily on help from her dialect coach as well as a former Alvin Ailey dancer, who have taught her to talk and move like the individual she is personifying. Still, Smith agreed that having to plumb what she called Ifill’s “profound historian” mindset was daunting, as were Ifill’s meticulously constructed sentences.

But by far the most difficult role was playing Allen Bullock, an African-American man arrested for inciting a Baltimore riot in the aftermath of Freddie Gray’s death. Smith compared trying to recreate his speech pattern to trying to interpret an impossible piece of music.

“I’m telling you, when I sat down and we studied it … we would listen … and go, ‘This is never going to happen,’” Smith said, recalling her exasperation. “That is what is hard.”

For some members of the Santa Clara community, the evening was a reprise: Smith served as the Sinatra Artist-in-Residence in the 2016–2017 year, and she and musician Marcus Shelby performed excerpts of Notes from the Field onstage at the Mayer Theatre in April 2017. Read more about that here.

For 2018–19, actor Taye Diggs serves as the Sinatra Artist-in-Residence.