Solar Cells Made from Goo

Read about the collaboration between Rich Barber (Physics) and Brian McNelis (Chemistry and Biochemistry) and solar cells made from goo. 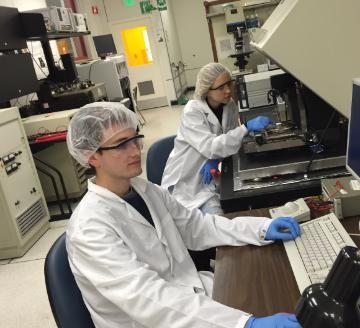 Photovoltaics, the direct conversion of solar energy into electrical energy, is a rapidly-growing sustainable-energy sector. The technologies that are currently most widely implemented use silicon (Si) based solar cells. While these systems are becoming more efficient, they are relatively expensive due to high manufacturing and material costs. Manufacturing requires a fabrication line similar to those used in standard microelectronics production. Since the crystalline Si wafer is the primary material ingredient, these solar cells also compete with the broader electronics industry for an expensive resource. This high cost has motivated the study of alternative materials for next-generation photovoltaics.

Polymer-based photovoltaics (PPV) offer the promise of low-cost and mechanically robust photovoltaic systems. Because they have the material properties of plastics, they can be made into flexible devices that are also highly resistant to breakage from mechanical stress or impact. In contrast, Si-based counterparts are very fragile. Furthermore, PPVs can be manufactured in a roll-to-roll process which essentially prints the materials from a solution form onto flexible substrates. Because this approach more closely resembles newspaper printing than electronics manufacturing, the cost of production for PPVs is a fraction of that for Si.

So why have PPV systems not been widely introduced as technology? It turns out that these materials suffer from two disadvantages: lower efficiency and shorter lifetime. Although the lower cost might mitigate the lower efficiency problem (just make more panels), lifetime is a serious issue. Just as plastic toys left in the yard for a long time tend to crumble, PPVs left in the sun (and that’s the point isn’t it) tend to suffer chemical and structural reorganization that reduces their efficiency.

A collaboration between Rich Barber (Physics) and Brian McNelis (Chemistry and Biochemistry) has been working on understanding how to improve these shortcomings. Specifically this group has focused on how variations in the chemical components in PPV might improve both efficiency and lifetime. In one of the more commonly studied PPV systems, the two primary compoents are a thiophene (sulfur ring) polymer (P3HT) which acts as an electron donor and a fullerene (C60 molecule) that acts as an electron acceptor. In solution by itself, the polymer is iridescent. In other words, when it is illuminated with a source of light, excitations of charge in the polymer relax and produce outgoing light. In order to harvest these charge excitations before they recombine, an electron acceptor is needed. Since straight C60 suffers from extremely low solubility, it is “functionalized” in order to enable “wet processing” of the samples. The resulting molecule (PCBM) is typically blended in chlorobenzene solution with the P3HT in equal weight. This solution becomes the active layer of the solar cells. When deposited into a device, the solution dries to form a tangled blend of P3HT-rich and PCBM-rich regions. This aspect of the experiment is really a “black art” in that the only control of the structure is indirect. In other words, experimental parameters like the specific molecules, the relative quantities of material, the amount of solvent in the blend and the temperature to which the samples are heat-treated will determine the structure of the active layer.

The project at SCU started with our substituting different functionalized C60 molecules into the material to see if there was an effect on stability. The first experiment involved taking PCBM (a C60 molecule that has a “tail” that ends in a methyl (CH3) group) and converting it into PCBOD (a C60 molecule that has a “tail” consisting of an 18 carbon chain). PCBOD is much more soluble than PCBM, so as expected there were significant differences in the solar cells. Although the efficiency went down, the stability was enhanced. This observation led the group to try a “library” of different molecules. The results obtained revealed that each new acceptor molecule yields working devices, but the functional changes produce differences that are hard to predict. Specifically, acceptor molecules that are isomers (same chemical composition but slightly different structures) produce solar cells with significant differences in performance. The working conclusion is that each new combination must be separately optimized, and that a library approach might prove valuable in assessing new molecules for this class of photovoltaic devices.

This kind of experimental effort is only possible in a collaboration between chemists and physicists: the former make the molecules, and the latter perform the electrical characterizations of devices made from them. To date over 20 SCU undergraduate students have been involved in this project. Almost all of them have appeared or will appear as co-authors on articles in a top solar materials journal.