The 2016 Gerald and Sally DeNardo Senior Prize winner is: 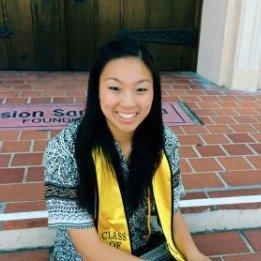 Award-winning Allyson Koh was nominated for the Gerald and Sally DeNardo Senior Prize in Science Research by Dr. Amelia Fuller, Associate Professor in Chemistry and Biochemistry. Allyson is a double major in Biology and Public Health, with a minor in Chemistry. Her professional goal is to attend medical school, and she will be applying this summer.

With a cumulative GPA of 3.91, it is clear she is the kind of student who has the drive to succeed in whatever path she chooses. Dr. Fuller states in her nomination letter, “I have been working with Allyson in my research lab on the synthesis and applications of heteroarylopeptoids since her sophomore year, including her work full-time over the past two summers. Allyson is a tremendously talented researcher and has been responsible for an extraordinary amount of progress in the lab. Above and beyond her exceptional work in this context, Allyson also personifies the foundational values of conscience and compassion and is dedicated to becoming a leader in the healthcare profession; I have no doubt that she will continue to excel in her future endeavors.”

When Allyson began her research, the lab was just starting a new project to develop a flexible and robust synthetic method to prepare novel molecules with interesting potential biological activities. Despite her nascent laboratory training, Allyson’s work became the centerpiece of the project, and her progress has rivaled that of a graduate student. In the course of her two years’ work, Allyson has carried out hundreds of reactions. She single-handedly ran all of the experiments to identify the best conditions to prepare the target molecules. She then applied those conditions to prepare dozens of analogs.

During the summer after her sophomore year, Allyson presented “Incorporating Heterocycles into the Backbone of Peptoids via COMU-mediated Synthesis” at the Advanced Biosciences Initiative Summer Research Symposium. For the 2014 American Chemical Society National Meeting in San Francisco, she and her colleagues completed a poster titled, “Synthesis of Modified Peptoids Comprising Heteroaromatic Backbones.”

Dr. Fuller and Allyson are presently writing a manuscript on all of Allyson’s work to be submitted to the Journal of Organic Chemistry within the next two months. This is an international, peer-reviewed journal read widely by those in the organic chemistry community, and Dr. Fuller thinks that the methods developed and molecules prepared by Allyson will attract broad interest.

Allyson has also been active in our local and global community. During her undergraduate career, she had the opportunity to join the Santa Clara Global Medical Brigades team to travel to Nicaragua. Although her proficiency in Spanish was limited, she believed that compassion and solidarity would transcend language barriers. She recalled one instance during her dental rotation when the dentist was extracting four teeth from a young woman who was writhing in pain, begging the dentist to stop. With gauze in one hand, Allyson reached out with the other and grabbed the woman’s hand. Both the woman and the dentist paused to give her a puzzled look as if no one had initiated such an act before. Nevertheless, the patient took her hand and squeezed it until all four teeth were removed. This experience was eye opening and extremely humbling for Allyson, as her actions had made a large impact. The patient came up to her afterwards and hugged her, validating Allyson’s belief that being aware of global situations and standing in solidarity with others are powerful gestures.

Throughout her senior year, she has participated in the Markkula Center’s Health Care Ethics Internship at O’Connor Hospital, where she has become conscientious of the glaring health disparities in the medical field, gaining real-world insights to recognize these gaps and to articulate ways to tackle them.

In her nomination, Dr. Fuller noted: “Allyson aspires to be a physician after graduating from SCU and medical school. Her dedication to these pursuits makes Allyson well-suited both to this particular research project and this award. On a personal level, Allyson is a student any professor or colleague would be delighted to work with. She is mature, engaged in her studies, conscientious, organized and amiable. I reiterate my highest support of Allyson for this well-deserved honor.”