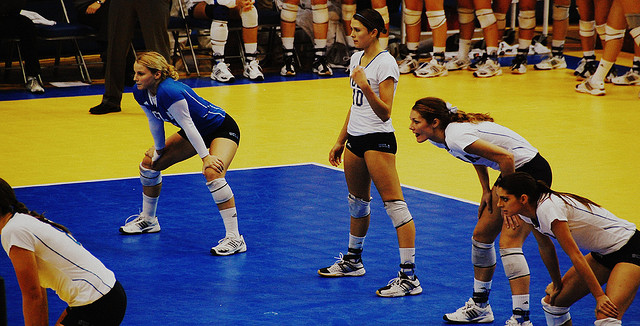 Photo by LWY available under a Creative Commons license of www.flickr.com.

In the last few years, countless ethical issues have arisen in the world of college sports. A series of scandals involving players receiving improper benefits, coaches involved in recruiting violations, and most recently the tragedy at Penn State, have challenged the integrity of college athletics, leaving many to wonder if sports are compatible with the goals of higher education. Some of the key ethical questions, regarding college sports include:

• Are College Sports Compatible with the Goals of Higher Education?

There is a tension these days between the goals of major college athletic programs and the mission of the universities they represent. Much of the tension arises from a lack of understanding between the two sides, but is there a fundamental problem?

Many people mistakenly assume that college administrators are opposed to sports and athletic achievement. People working in higher education usually view the role of athletics differently than most casual sports fans. Many educators see sports as an important supplement to a student-athlete's overall education. The physical strength and character gained from playing sports is an important part of a university's mission in educating the whole person – mind, body, and soul. Many alumni and fans, however, believe the athlete is on campus to play sports.

Some observers believe that the classic educational model is far too idealistic and outdated. This is not to say they don't believe sports can teach a person important life lessons. It is just that the world of college athletics has become so prominent and so competitive that things like education are not taking as seriously or viewed to be as important as success on the field. For some athletic department staff, simply keeping a player academically eligible is considered to be enough. They do not push their athletes to excel in the classroom the same way they push them to excel in their sport.

• Do we exploit college athletes if we don't pay them?

Without a doubt, one of the major debates in the world of college sports is whether or not student athletes should be paid, at least in revenue generating sports (i.e. football, and men's basketball). Those that think they should be paid believe that colleges and universities generating millions of dollars in revenue are unjustly exploiting the labor of student-athletes by not giving them their fair share of the profits. They do not believe that the value of a full-ride athletic scholarship is equivalent to the multi-million dollar coaches' salaries and television contracts, especially when universities lower their academic standards in order to keep players eligible to win games and generate more revenue. They argue that the entire system is hypocritical, that universities unethically exploit their best athletes for money, and that paying those athletes is the most important step in undoing the unfairness.

On the other side of the debate are those who believe paying college football players and basketball players would compromise the goals of higher education. They point to the fact that only a handful of colleges actually make a profit and that most of the money generated by these programs goes to support other non-revenue generating programs, such as Olympic sports. Opponents to paying athletes view it as unjust to eliminate athletic opportunities for most in order to pay a few. The goal of an athletic department, in their view, is not to make money. They are cocerned when they hear people mock the value and importance of a free education. To these, any money generated by a team's performance ought to be reinvested back into the education of the student-athletes because after all, universities are in the business of education, not minor league football.

• Does collegiate sports do enough to protect the health and safety of athletes?

Safety is always a concern at any level of competition. However, with college athletes, the situation is unique because of the rules governing a player's eligibility.

Under the NCAA's current system for Division I, student-athletes have five years to complete four years of athletic eligibility. Players may petition for a sixth year if they receive an injury that prevented them from competing in one of those years. However, the NCAA has not been consistent in its rulings regarding medical redshirt petitions. This can cause players to ignore minor injuries for fear of losing eligibility, putting them at risk for even greater harm.

Some criticize colleges for not treating players as employees, in order to avoid paying medical costs for a debilitating injury. Most schools do cover medical costs of injured players while they are in enrolled in school and still officially on the team. However, once a player graduates, or stops playing due to injury, the university is no longer liable for his or her medical costs, which makes many people question the integrity of college athletic policies. They believe universities ought to be doing more to take care of injured athletes.

• Are NCAA rules, regulations, and penalties fair and effective?

The NCAA is arguably one of the most scrutinized governing bodies in all of sports. College athletics still operate under the amateur model, and the NCAA is responsible for laying out the guidelines for schools to follow in order to preserve a student-athlete's amateur status. Many believe that the rules go too far.

The No. 1 criticism is that the rules are too restrictive, and they punish the wrong people. An example is the recent penalties levied against USC because of the improper benefits their former running back Reggie Bush received while attending the school. Bush was long gone by the time the NCAA came down on USC, as was the head coach Pete Carroll. Instead of directly punishing the player who broke the rules, the NCAA could only punish the institution in which the violation occurred, and many find this to be unfair and unethical.

The other major criticism is that the rules are too restrictive of a players' liberty. Athletes are not allowed to accept even so much as a meal from someone because of their athletic achievements while in college, and many find that to be unfair. Critics also feel it is hypocritical of universities to turn around and sell the imaging rights of their brand and their athletes to EA Sports videogames for millions of dollars.

Those who defend the NCAA believe strongly in the amateur model. They see the NCAA's role as defending the integrity of sports, as well as preventing the "win-at-all-costs" mentality from becoming the culture within a college athletic department. That, they say, leads to unethical and corrupt behavior, such as the recent tragedy at Penn State.