Don’t Know Much About Geography

A central theme in Carolyn Trist’s World Geography class is that where things happen is part of why things happen the way they do.

When U.S. Secretary of State Mike Pompeo recently challenged National Public Radio reporter/co-host Mary Louise Kelly to locate Ukraine on an unmarked map, it was easy for her.

Not so much for many others.

And that’s worrisome to people like Carolyn Trist, who has taught World Geography at Santa Clara since 2007. She’s not alone.

Not long after Russia invaded Crimea—then part of Ukraine—in February 2014, a poll by U.S. academics showed only one in six Americans sampled could identify Ukraine on an unmarked map. The lack of knowledge wouldn’t just have gotten them an F on a school test, it was also linked to preferences: The farther their guesses were from Ukraine’s actual location, the more they favored a U.S. military intervention.

A similar poll in 2017 again revealed that just one in six Americans sampled could locate North Korea on an unmarked map. When it came to which policies the U.S. should pursue regarding North Korea, those who could find the country were more likely to prefer diplomacy and non-military strategies.

We sought out Trist to discuss her passion for promoting geographical awareness, and why so many Americans have such a geography deficit.

What’s your reaction to these kinds of polls about people who can’t identify important places on a map?
They justify my entire existence! And they’re good examples of one of the central themes in my class, which is that where things happen is part of why things happen the way they do. My main goal is for students to take away a methodology for using geography as a fundamental part of critical thinking about world events. I want them to be able to see behind the news headlines and to geographically contextualize international political debates.

How much does it matter that most Americans, including SCU students, get the latest headlines from news feeds on their smartphones?
We get everything in little snippets, and that can be dangerous because the information has so little geographic or historical context. We read about a controversy connected to Ukraine, but there’s often no map, no history, no chronology showing why there is a conflict there, or why the U.S. got involved and how it got to this point. For example, understanding Ukraine’s complicated historical relationship to Russia and the tremendous military advantage and geostrategic importance of the Crimean Peninsula to Russia is helpful! How we understand a problem strongly influences how we go about solving and responding to it.

Why are we so illiterate when it comes to world geography?
Americans look at the map of North America and see two borders— Canada and Mexico—two big countries that don’t threaten the U.S. In many places around the world, you would drive through several countries and cross several borders in the time it takes to drive from San Francisco to Los Angeles. So you can understand the insularity of American political identity. But generally, I find Santa Clara students to be very “world aware,” especially compared to the relatively low American average represented in those polls.

Can you really cover World Geography in 105 minutes, twice a week, in 10 weeks?
It’s a lot of material. We do a broad overview of six world regions based on three things: Physical geography, which includes location and resources, the imprint of colonialism, and geopolitics. Then we dive into a few case studies for each region. The way I teach the class has evolved with the students’ interests and in response to world events. For example, when the Arab Spring was going on in 2011, students were super interested so we started by focusing on the Middle East. Last summer, the New York Times published a special feature called 1619, the year the first slaves from Africa arrived in what would become Virginia. The class discussed how the slavery-based plantation system helped to build the American economy and expand U.S. territory, the importance of the Mississippi River trade routes, the 500,000 square miles the U.S. acquired after the Mexican-American War, and the many similarites with the sugar plantations in the Caribbean. So, geography affects economics, and economics affects strategic interests. That’s the common thread, and now when they look at a map of the world they will see these connections.

By the end of your course, you hope your students walk away having “internalized the questioning process.”
I hope that when they hear about a political conflict or environmental problem in another part of the world they will ask themselves, “Wait a minute. Where did that happen, and why?” and then poke around some more. This is something they can do on their own for almost anything they’re interested in, and well into their futures. Geography is embedded in a lot of courses at Santa Clara. It’s a way of thinking that’s useful for majors from religion to economics. Whether you are working in international business or doing a tech degree, it’s helpful to understand how the world is interconnected.  And if you plan to study abroad or work overseas, it’s essential to understand the history and politics of those places. 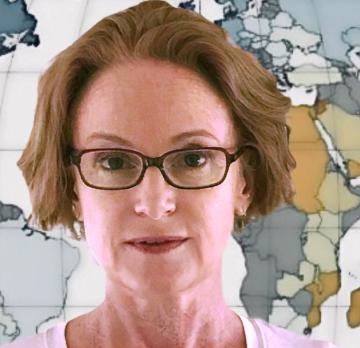