Jeff Mitchell is in his 12th year at Santa Clara and currently serves as senior associate athletic director for external operations. Mitchell served as the University’s acting executive director of Athletics from April to August 2015. He is the co-author of the textbook Sport, Ethics and Leadership, published in July 2017.

In his current role, Mitchell is a chief advisor to Athletic Director Renee Baumgartner and manages the day-to-day operations of the department with a directed focus on external operations and revenue generation while providing guidance and support to the department’s administrative and coaching staff. Mitchell is the department’s chief financial officer, chief revenue officer, and primary legal liaison. In addition, he serves as the sport administrator for the men’s basketball and baseball programs.

A native Mississippian, Mitchell is a 2001 graduate of Millsaps College in Jackson, Mississippi, where he was a four-year member of both the varsity baseball team and the athletic department’s sports information staff. After graduation, Mitchell was the director of sports information at Millsaps and served as an assistant coach for the 2003 Millsaps baseball team. Under his leadership the team advanced to the NCAA Division III South Regional Tournament. Mitchell also earned an MBA from the Millsaps College Else School of Management in 2003.

Mitchell's career in athletic administration grew while he was in law school at the University of Mississippi, where he earned a JD in 2005. While at Ole Miss, Mitchell served as a graduate assistant in the external relations unit and primarily worked with the Ole Miss football and men’s basketball programs.

Mitchell resides in Campbell, Calif. with his wife, April. They have one daughter, Harper Wynne, age 9, and one son, Carson James, age 4.

Life Lessons from an Orange 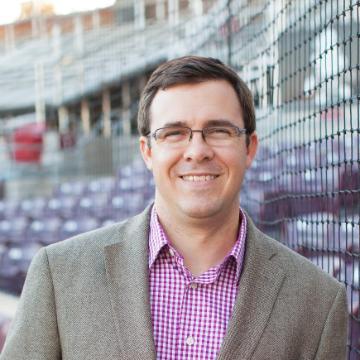 Author image link to article
Capitalizing on a most opportune moment, a curious young fourth grader approached a famous philosopher who was making a stop in the...
Read More

Winning Is the Sum of Small Victories

Author image link to article
“If winning were easy, everyone would do it.” Any member of a team either at work, school, or in sports has likely run into that quote. Of course, experience...
Read More