One year ago this month, John Seibert Farnsworth was getting ready for an international tour to promote his second book, “Nature Beyond Solitude: Notes From the Field” (Cornell University Press, 2020). But the pandemic hit, halting his plans to appear at some Seattle bookstores (he lives in Washington with his wife), then on to Vancouver, British Columbia, followed by London and Dublin.

Dismayed but undeterred, the author has done several virtual readings while sheltering in place, as well as a radio show, podcast, and now a Q&A with Illuminate.

Farnsworth’s mission was to write about nature, from nature, during extended visits to five environmental field stations in the western U.S. During that time, he felt that he was encountering “a new golden age of natural history.”

In each site, he teams up with scientists, citizen scientists, rangers, stewards, and graduate students engaged in long-term ecological study, all the while scribbling notes about what he sees and hears and feels in the moment.

We talked to Farnsworth about “Nature Beyond Solitude,” an excerpt of which will appear in the upcoming spring edition of the Santa Clara Magazine.

An opportunity to hear him read from and discuss his book is slated for Wed., March 31, during an afternoon Zoom event sponsored by the Alumni Association, the Center for Sustainability, and the University Library. Registration is encouraged.

This book is about your six-month journey, but it’s also a journey we get to experience through your eyes and ears. What message do you hope resonates with readers?
If there’s a central goal I have for all my books, it’s to connect or reconnect readers with nature through my observations. I didn’t really have a message for those readers when I set off on this project, at least not the way a preacher has a message to confer. Rather, I was happy to share some of my learnings during my six months afield.

You write that Henry David Thoreau’s “Walden” was a manifesto to you in your youth. Was that your inspiration to become a lifelong student—and then teacher—of environmental writing and literature?
My career trajectory was not as deliberate as it might appear. My life has been an accident of a one-thing-leads-to-the-next fortuity where my guardian angel manages to keep me from ruin. That said, the one thing I’ve always carried away from Thoreau was the high-level objective to live life more deliberately. “Nature Beyond Solitude” continues that project.

I resonate with being called a life-long student. I earned my first masters degree in 1999, which was 25 years after earning my B.A. The second masters degree wasn’t earned until 2005, and I was almost 60 years old by the time I was awarded my Ph.D. What this meant was that I was a grad student for seven of my first 11 years on the SCU faculty. I think I got along so well with students because I was one myself.

Your goal was to write “in situ,” or within the scenery, as often as possible. Were there days when you wished you could record some of your conversations, sights and sounds on your cell phone, and transcribe those as well?
Well, four of the five field stations I visited were too remote to have cell coverage. However, for artistic reasons I was glad to take a low-tech approach. I worked out of two Moleskine notebooks the whole time, a pocket-sized one where I could jot down quick notes while on the trail, and a 9x5 inch one that I kept in my daypack where I could put together actual paragraphs whenever possible, especially during interviews. Those larger notebooks, by the way, are now part of the archives in the SCU library. I filled up more than a dozen of them, if I remember correctly. It was difficult to part with them, but I was honored that the University wanted to preserve them.

One of the ways I made things work was whenever possible I restricted my field activity to four or five hours per day. That way I could spend another four hours in the afternoon transcribing my field notes. I needed an hour of transcription for almost every hour afield, which meant that eight hours in the field would result in a 16-hour workday. That would be too much, especially during a sabbatical.

Exploring, researching, interviewing, writing—having to coordinate all of this every day over weeks at each field station seems like a monumental task. When did you know you had observed enough?
The amount of work was exhausting. Ironically, when I returned to the classroom after the sabbatical, it provided a much-needed rest. But there was never a question of having observed enough. Rather, it was about not having too much material. The book, which I think of as my final field notes, could easily have been twice as long. The question I always asked while redacting the raw material was whether it was interesting. I’m one of those writers who thinks it’s a sin to bore a reader.

Can you talk about the art, and strategy, behind your footnotes, both instructive (The eucalyptus is the world’s tallest angiosperm, which is to say that it’s our tallest flowering plant) and humorous, i.e. your “secret-recipe” gorp? (Two parts blister peanuts, one-part raisins, and one-part smokehouse almonds. Absolutely no M&Ms, freeze-dried banana chips, cashews, or anything else that clashes with cold-lagered, cold-filtered beer.)
First, as far as the art and strategy behind the field notes in general, a major part of what I was trying to do was to have the readers feel that they were along for the ride. In other words, I wanted them to share my experiences as deeply as possible even though their experience had to be vicarious. To make that happen, I had to dig deep into my training in creative writing.

You ask, however, about the strategy behind my footnotes. They gave me an opportunity to edit, especially to provide clarity, after the fact. So, while the field notes are entirely contemporaneous, the footnotes are not. For example, in the peer review process the reviewers pointed out a few areas where clarification would be helpful. The only way to provide that while still preserving the “in situ” nature of the field notes was via the footnotes.

As an aside, I confess to being one of those writers who are absolutely in love with footnotes, especially as opposed to endnotes. The editors at Cornell University Press, who I love working with, understand that this is the one area where I’m intransigent.

Speaking of footnotes: In one of them, you mentioned that you dropped a field station from the final version of the book. What was that station and why wasn’t it included?
That’s true. When I finished at the first station, the Hastings Natural History Reservation, I had 20,000 words of manuscript. I called my agent in New York and asked her whether she thought a 120,000-word book would work. She replied that publishing such a book would be expensive, and no one would be willing to read my work at that price. So I edited that first chapter back to 15,000 words, which involved some painful cutting, and cut back to five field stations.

The station I dropped was Dinosaur National Monument, where I would have spent a few weeks running the Green River with one of the river rangers there working to eliminate invasive plants. I would have loved to do that, especially since the ranger was one of my favorite nephews, but the logistics of fitting that in with all the other work was turning out to be a bit too much to fit into my sabbatical.

As a more experienced outdoors person, you’re not afraid to chronicle issues you ran into that often plague many amateurs: not bringing the right boots, not packing enough water, gasping for air on steep hills. Why did you mention those scenes?
It’s important to me to have an honest relationship with my reader. I love sharing the sublime moments with them, as well as my passions, but it’s important also to share my humanity. I think this pays off, ultimately, in a better relationship with readers. I’m hearing a lot these days from people who have read the book and want to friend me on Facebook. The feedback I most commonly receive is that people feel they really know me after reading one of my books. I love that, because I work hard to be real as an author.

Throughout the book, you rattle off endless names of birds you recognize by sight or sound. Where does your love of avians come from, and how long did it take to get that good?
Birding came later after I’d already developed expertise in wildflowers, desert ecology and underwater ecology. I shied away from birds at first because of my colorblindness, but then I found out that Professor Paul Ehrlich, a well-known naturalist at Stanford who has written extensively about birds and butterflies, was colorblind. So I decided that if Paul could do it I could do it.

Part of the trick was to get an expensive pair of binoculars that had enough resolution to make out details of feather topography. Even then, it took me about 20 years to get good enough that I could teach my “Writing for the Birds” course at SCU. I’m hoping those students, most of whom seemed to enjoy the course, would agree that it was worth the effort. It was one of the great joys of my teaching career to be able to share my love of birds.

Finally, you often mentioned your habit of drinking hot tea. Did you find more tea or coffee drinkers among your colleagues in the field stations?
Regardless of which field station I found myself in, there were a lot of coffee drinkers, just as there were a lot of early mornings. I get the distinct impression that science runs on coffee, and just as I was often the only non-scientist on station, I was often the only tea drinker as well. But there’s some history there.

Years ago I taught a nature writing course for the SCU studies abroad program at the University of Durham, in England, a program that unfortunately no longer exists. You couldn’t get a decent cup of coffee in Durham, but there was always plenty of tea. After that, I earned my Ph.D at the University of Stirling, in Scotland. It was the same situation there as far as caffeinated beverages are concerned.

As a matter of fact, during my oral exams my supervisor, the great Scottish nature writer Kathleen Jamie made a pot of coffee that was absolutely terrible, but she figured that I’d need it because I was American. I asked her for tea, please, but some of the Scottish professors who were my examiners attempted to drink the coffee without much success. I had to say a quick prayer that the coffee wouldn’t put them in a bad mood. 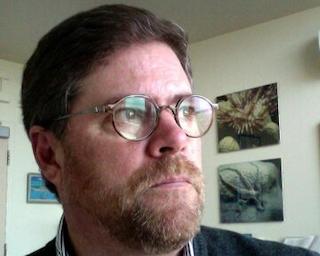