An astronomical transit, like an eclipse, occurs when one object passes between two others. The term “transit” is usually reserved for situations in which the...

We’ll soon be treated to a relatively rare astronomical event. On May 9, 2016 in most parts of the world observers with a properly protected telescope will see a small, black dot moving across the face of the Sun. The dot will be the planet Mercury, and the rare event is called a “transit.” Let’s wonder a bit about the science of transits.

An astronomical transit, like an eclipse, occurs when one object passes between two others. The term “transit” is usually reserved for situations in which the apparent size of that first object is small compared to the object it (partially) blocks.

Mercury will appear only as a tiny back dot crossing the face of the Sun, just as it did during the last transit in 2006. 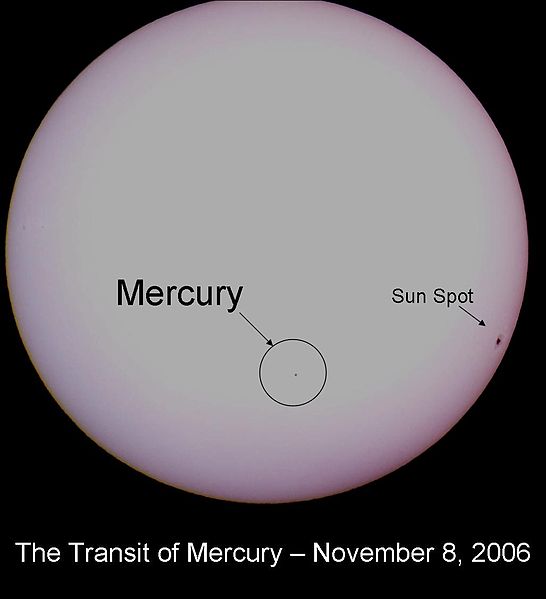 How small is Mercury’s dot? That sunspot is about the same size as the Earth.

If you were watching as Mercury passes in front of the Sun (through a properly protected telescope!) during the upcoming transit, the light from Sun would appear a bit dimmer. Oh, yes, only just a very, very little bit dimmer, but because Mercury will be partially blocking the Sun, just a little bit less sunlight reaches the Earth. And that tiny change in the Sun’s brightness is detectable – astronomers have developed techniques that allow them to see a drop of less than one hundredth of one percent in the light received from a star!

The change in brightness as a planet passes in between us and a star is a clear way to detect the presence of a planet orbiting a star other than our own Sun.

Are there planets orbiting distant stars? Humans have long speculated about their existence, including the 16th century Italian friar and philosopher Giordano Bruno. He proclaimed that there are “countless suns and countless earths all rotating around their suns.” For his cosmological theories Bruno was found guilty of heresy and burned at the stake. (Different times.) But today we know that Bruno was correct and most of what we now know about all of those distant planets we’ve learned from tiny dots of darkness passing across the faces of distant stars.

An observer on Neptune would, over the course of time, be able to see transits of every one of the other seven planets. What does this imply about the orbits of the eight planets?