How many people must be in a group for there to be a 50-50 chance that two will have been born on the same day in the same month?

We have wondered in this space about all sorts of scientific curiosities. Numbers and mathematics are the heart of science; today let’s wonder about something purely mathematical and also curious. Let’s wonder about the “birthday problem.”

The birthday problem is usually stated in the form of a question:

If you find yourself in a group with, say, four other people, what’s the chance that your birthday won’t match any one of theirs? For any one of them, it is (as above) 364 divided by 365. So the probability of no match with any of the four is: 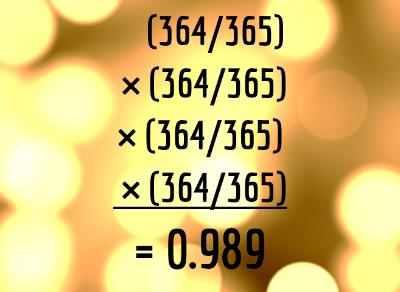 But what’s the chance that any two people in the group will share their birthdays? Let’s call the five people Veronica (V), Wally (W), Xena (X), You (Y), and Zelda (Z). We know that there is a 1.1 percent probability that your birthday will match another’s. But what about a match between Veronica and Wally? Or between Veronica and Zelda? We need to consider all possible pairs. Using just the letter abbreviations for clarity, and including you, the list of all possible pairs is: 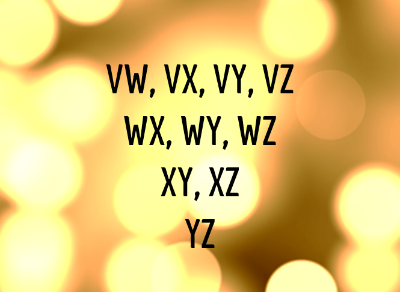 You can probably guess that the more people, the larger the number of ways they can be grouped into pairs. And the more pairs that can be formed, the more chances for a match. In addition, the number of pairs grows more and more quickly as people are added to the group. For a group of five people there are 10 possible pairs. For a group of 10 there are 45 pairs. For 15 people there are 105, and for 20 people, 190 pairs. The probability of no match among all of the pairs drops and drops as the group increases in size, and the probability of getting a match goes up just as quickly.

So then. How many people must be in a group for there to be a 50-50 chance of two sharing a birthday?

It only takes 23 people in a group for a 50-50 chance that two share a birthday. An unexpected result, perhaps. Problem solved!

One of a couple’s two children is a girl. Assuming a 50-50 chance of any baby being born a boy or girl, what is the probability that the couple’s other child is a girl? The answer may surprise you. (Hint: Imagine the children’s names are Avery and Blair, and make a list of all possibilities for their sexes.)

An often-repeated conundrum is the “Monte Hall problem.” You are a contestant on the Let’s Make a Deal television show. Monte Hall, the host, offers you a choice of three doors; behind one is a great prize and behind the other two … duds. After you make your choice, Monte opens one of the doors you didn’t pick to reveal … a dud. He offers you the option of switching to the other remaining door. Should you stick with your original choice, switch, or does it not matter? The answer may surprise you. (Hint: Make a list of all possibilities of prize placements, your choices, and Monte’s reveals.)