Michael E. Engh, S.J. took office as the 28th president of Santa Clara University in 2009. He served as the chief executive officer with overall responsibility for its operational affairs. 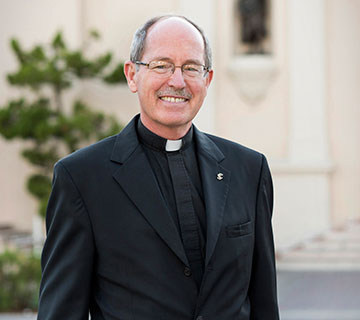 Father Engh led the University in defining the University's vision and setting the course for the future with the bold new plan, Santa Clara 2020.

Prior to his appointment as president, Fr. Engh served as Dean of the Bellarmine College of Liberal Arts and professor of history at Loyola Marymount University in Los Angeles. A teacher and historian of the American West, Fr. Engh has published on the history of Los Angeles and the role of religion in the history of the American West. He was ordained a priest for the Society of Jesus in 1981. He holds a B.A. from Loyola University of Los Angeles, now Loyola Marymount University; an M.A. from Gonzaga University; a Master of Divinity from the Jesuit School of Theology at Berkeley; and a Doctorate from the University of Wisconsin-Madison.