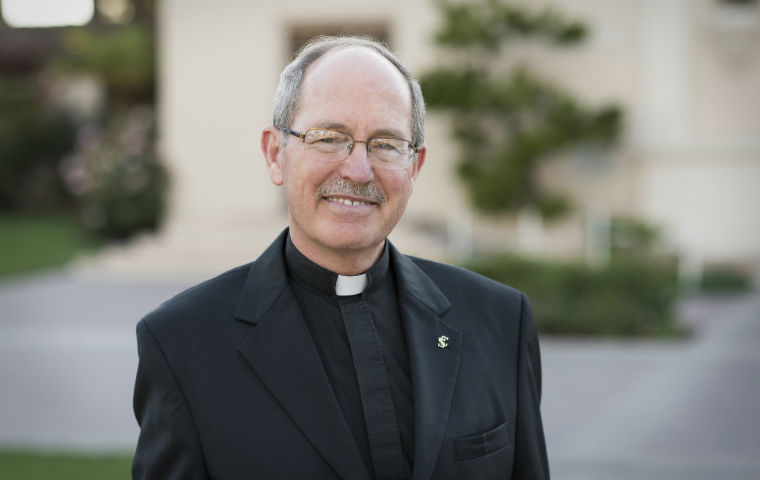 SANTA CLARA, Calif., June 1, 2018–Santa Clara University President Michael E. Engh, S.J., today announced that he plans to conclude his presidency on June 30, 2019, following his tenth anniversary as President and at the end of the 2018-2019 academic year. Father Engh has served as Santa Clara’s 28th president since 2009. He was the University’s first new President in 20 years and led the University in defining its vision for the future with Santa Clara 2020, a bold and integrated strategic plan to advance Santa Clara's mission and strengthen its capacity to educate for the betterment of society.

“I am honored to have had the opportunity to lead this distinguished university over the past ten years. As I have reflected on the University’s path as well as my own, I came to the conclusion that now is the right time to bring in a new leader to take Santa Clara University into the future,” said Father Engh. “Santa Clara is prospering and rising to new heights of achievement in teaching, curriculum development, scholarship, creative expression, and service to our students and the broader community. I have immense gratitude for the Santa Clara Community’s whole-hearted dedication to our shared mission of educating women and men to create a more just, humane, and sustainable world. I am proud of all we have accomplished together and look forward to spending the upcoming year working with the Community to continue to further our goals.”

During his tenure, Father Engh substantially strengthened the University and advanced its mission and reputation. In particular, Father Engh greatly expanded academic offerings by creating nearly 20 new degrees, certificates or online degree programs, transforming the size, diversity and caliber of the student body by growing the number of applicants by 60% while simultaneously improving the graduation rate by nearly 10% and increasing the average GPA of accepted students from 3.55 in 2009 to 3.67 in 2017, and median SAT score by 12% from 2009 to 2017. Additionally, under Father Engh’s leadership, the University attracted six new Academic Deans and hired nearly all members of the executive leadership, two of the Executive Directors for the Centers of Distinction, and the Director of Campus Ministry, while producing numerous Rhodes, Truman, Schwarzman, Stanford Knight-Hennessy, Fulbright, Udall, and Goldwater Scholars, increasing the number of programs and fellowships in the Markkula Center and the Miller Center for Social Entrepreneurship, and doubling the number of first-generation college LEAD Scholars Program participants.

Under Father Engh’s leadership, the University made significant progress in a number of other important areas, including:

Father Engh was also instrumental in advancing the University’s theological studies, education and ministry. Among other efforts, he oversaw the integration of the Jesuit School of Theology, the initiation of a Post-Doc Consortium among Jesuit universities to recruit highly talented faculty to Santa Clara, launch of the Online Hispanic Lay Ministry and Online Masters in Theological Studies programs and establishment of the ExCEL Teacher Training for Catholic Schools.

“Santa Clara University plays a unique and important role in Silicon Valley, and on behalf of the entire Board of Trustees, I would like to thank Father Engh for his exceptional leadership and tremendous contributions,” said Paul Gentzkow, Chair of the Board of Trustees. “Father Engh’s intelligence, compassion, integrity and humility have guided the University, an exemplar of Jesuit education. We appreciate his distinguished service to the Santa Clara University Community, of which he will always be a part. We look forward to working closely with Father Engh and our talented and capable leadership team over the coming year as we continue to advance important University priorities.”

Prior to his appointment as president, Father Engh served as Dean of the Bellarmine College of Liberal Arts and professor of history at Loyola Marymount University in Los Angeles. He was ordained a priest for the Society of Jesus in 1981. He holds a B.A. from Loyola Marymount University; an M.A. from Gonzaga University; a Master of Divinity from the Jesuit School of Theology at Berkeley; and a Doctorate from the University of Wisconsin-Madison. Father Engh also serves on a number of boards, including the Board of Trustees of Boston College, the Board of Directors of the Silicon Valley Leadership Group, the Board of Directors of the Bay Area Council, the Board of Directors of the Association of Jesuit Colleges and Universities (AJCU), the Board of Trustees of the Graduate Theological Union, and also served on the Board of Trustees of Bellarmine College Preparatory. He chaired the President’s Council of the West Coast Conference and holds an appointment on the Executive Board of the Association of Independent California Colleges and Universities. He is also a member of the Association of Governing Boards of Universities and Colleges and the U.S. Catholic Bishops’ Conference Working Group on Catholic Higher Education.

The Board of Trustees will follow established University procedures in assembling a search committee to identify Santa Clara University’s next President. The Committee will comprise representatives from the Board of Trustees, University faculty and staff and members of the Jesuit community, and will consult with the University community. The Committee will consider the University’s deep roots, Jesuit, Catholic values and long-range goals to guide the search and selection process.

In June 2019, at the conclusion of the 2018-2019 academic year, Father Engh will take a sabbatical, after which he will meet with the Jesuit Provincial regarding his next assignment. He will remain available to assist his successor in any capacity.