What were the stories of the Asian women, and the others, in Atlanta, whose lives were cut short so abruptly? What had they lived, what had they survived, before they didn’t survive? What does it mean for their children and grandchildren, their parents and partners, to now survive? When I read the news, all I wanted was to hear about these women’s life stories, about who they cared for and who cared for them.

And for days afterwards, I read story after heartbreaking story about anti-Asian racism posted by friends on social media, the ordinary and mundane kind as well as those moments that are more brutal and exceptional.  The stories spilled out.

Being circled and surrounded by the sounds of “ching chong chang” day after day as the only Asian boy in the schoolyard. Finding a note in the mail saying that your husband’s recent death means “one less Asian we have to put up with” in the community and being told that now is the time to “pack your bags and go back to your country.” Being spat on, getting body slammed, panicking at the thought of your parents going for a walk.

I want us to honor these stories.

And, even as we center Asian American stories at particular moments, I’d like us to acknowledge how the filaments and foundations from others help provide infrastructure for our speaking up and speaking back, and how we in turn must also de-center ourselves and center others.

I have felt viscerally how the public space to work against anti-Asian racism has expanded exponentially, and for that and so much more, we Asian Americans owe a great debt to the Black freedom struggle, which everyday people participated in, courageously, for centuries, and whose most recent iterations include the Movement for Black Lives that was galvanized in the wake of Ferguson and Minneapolis, of Mike Brown and George Floyd, and so many others. In recognition of this debt, and in order to do the real work of solidarity with Black and other communities, work that involves risk and vulnerability, we must ask the difficult questions of ourselves. How have Asian Americans benefited from anti-Blackness, the dispossession of indigenous peoples, the exploitation of Latinx labor? What must we change in ourselves and in the world so that we can all be free? 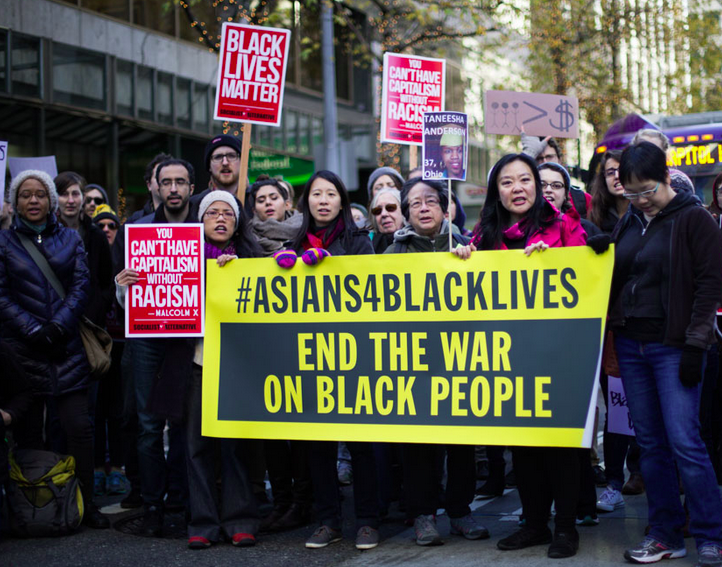 My friend who’s a recruiter says there are companies that consistently hire Asian women because we are seen as nonthreatening. Is this a form of anti-Asian racism?  Absolutely.  But it is not the same as Black or Latinx people not being hired because they are seen as threatening. We’re talking about livelihood, we’re talking about life chances and life opportunities for future generations.

Dismantling anti-Blackness, supporting indigenous and Latinx struggles, means dismantling the world as we know it. It means interrogating how we can be privileged even as we are also targets, and being willing to center others even as we most hunger to be seen.

There are some Asian Americans who believe that historically no one has cared about us, no one has seen us—hence, the yearning for recognition.  But we care about, and we care for, each other. My aspiration is that we care for the ones that others don’t care for--Asian, Black, indigenous, Latinx, of Middle Eastern/North African descent, feminized, trans, queer.

My job, my life’s work, is, literally, to care about Asian Americans.  I see us, I hear us, I love us. I love the way that we laugh at our drama and our trauma, the way that we honor and grieve intergenerational pain that is informed by histories of war. I love that we embody and perform alternatives to dominant American modes of gender. I love martial arts choreography, how breathtakingly graceful and badass it is. I love that I can’t tell if two Asian aunties are having a big argument with each other or simply having an animated friendly conversation.

twin pandemics blog, The Stories We Tell and Don’t Tell
685197