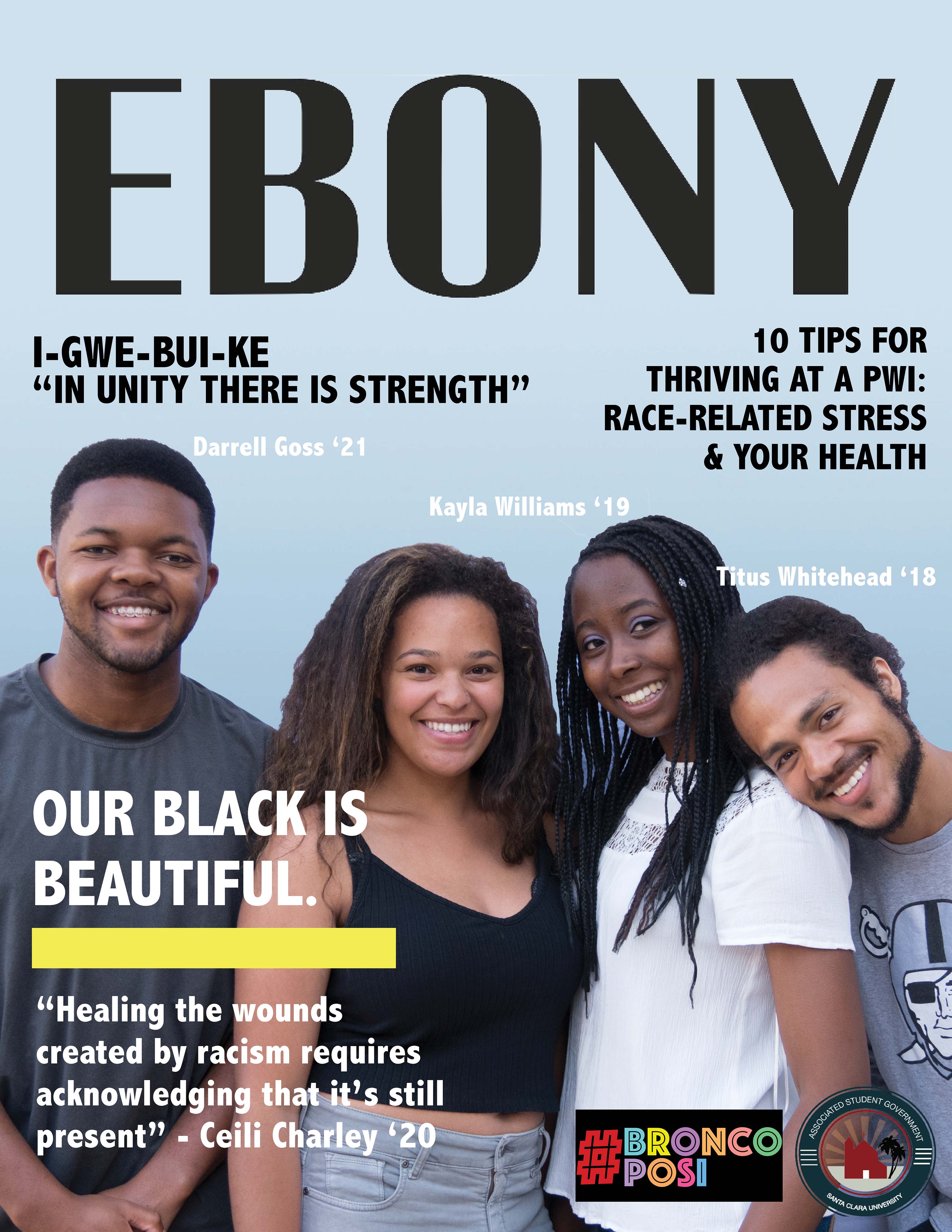 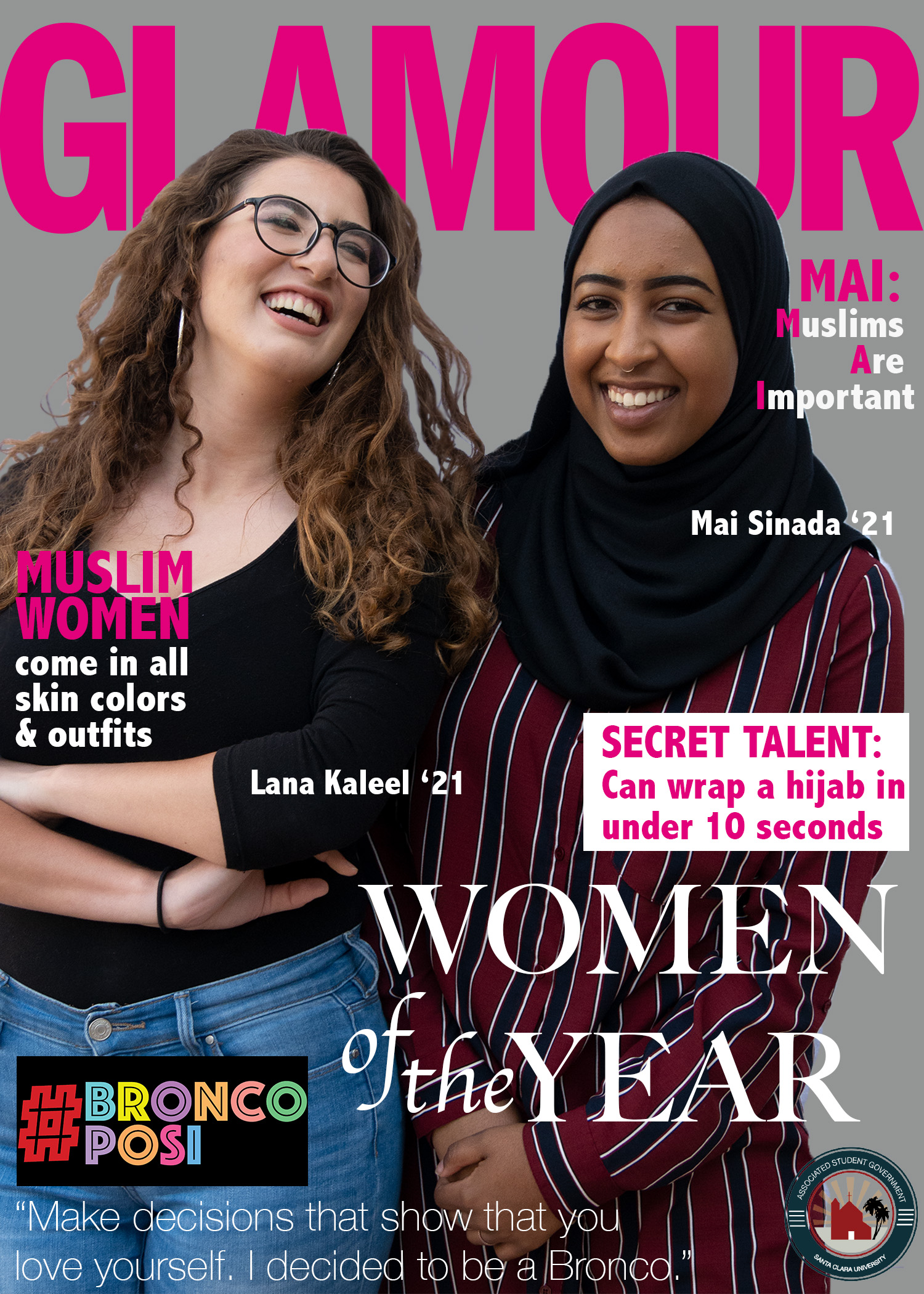 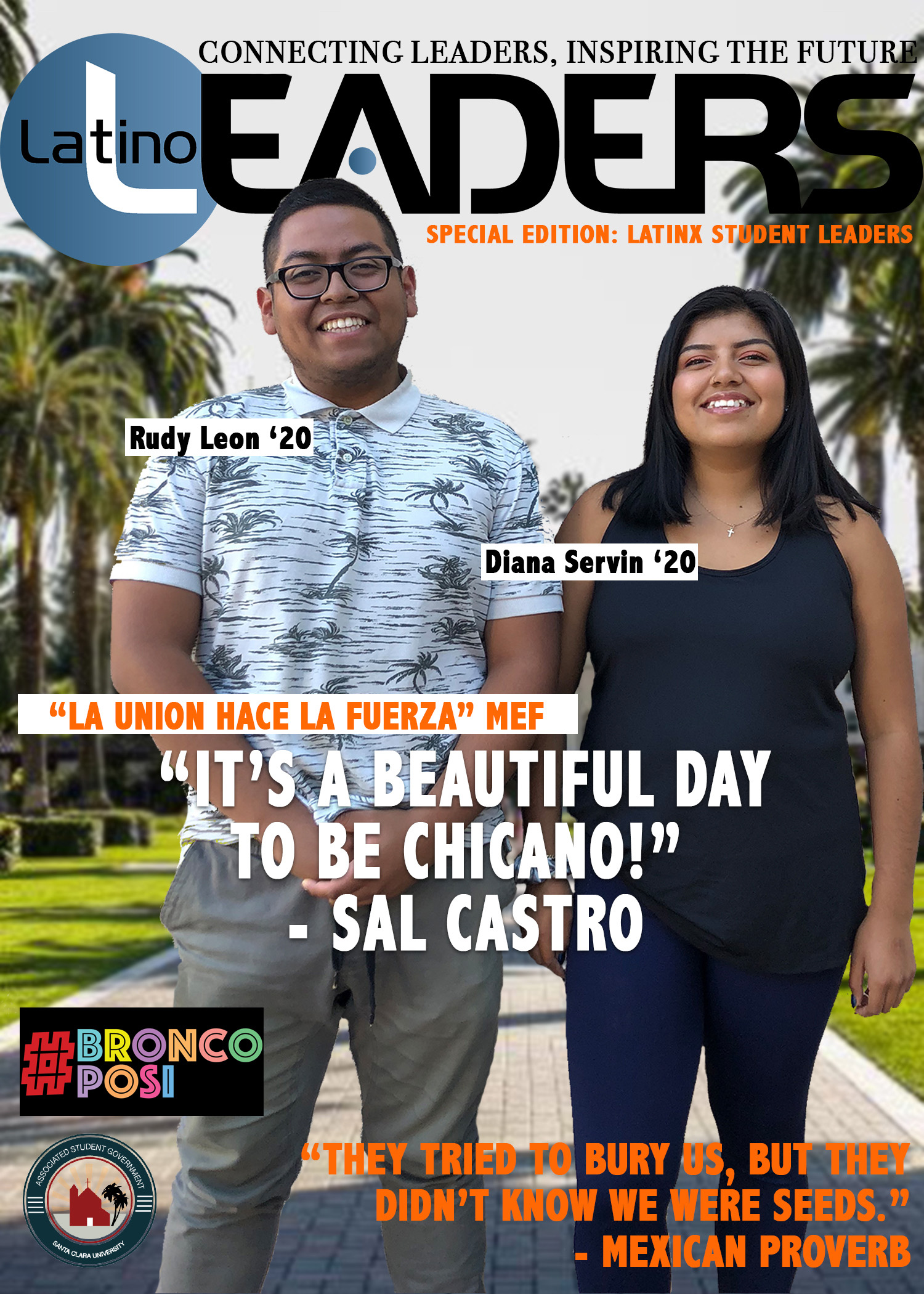 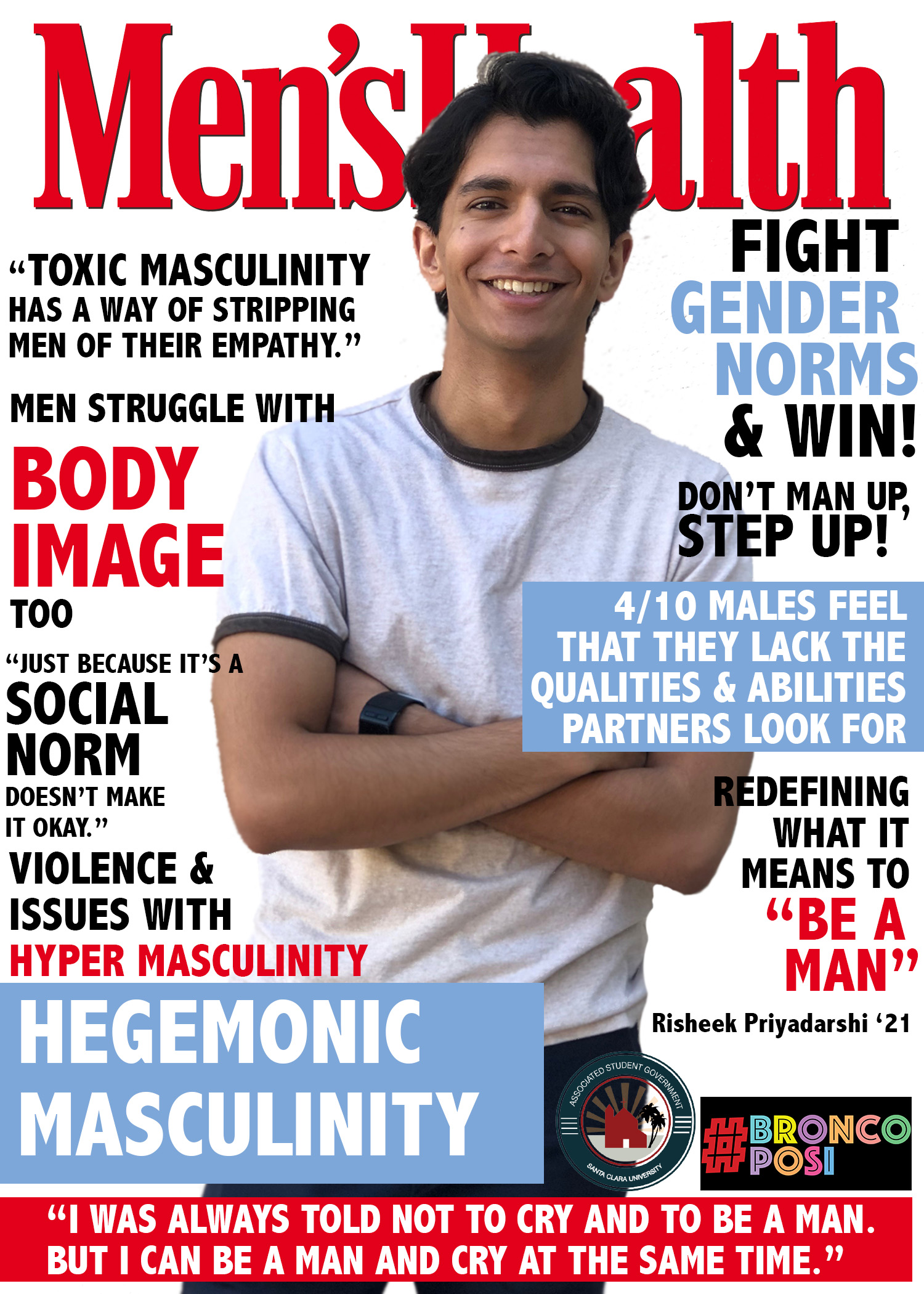 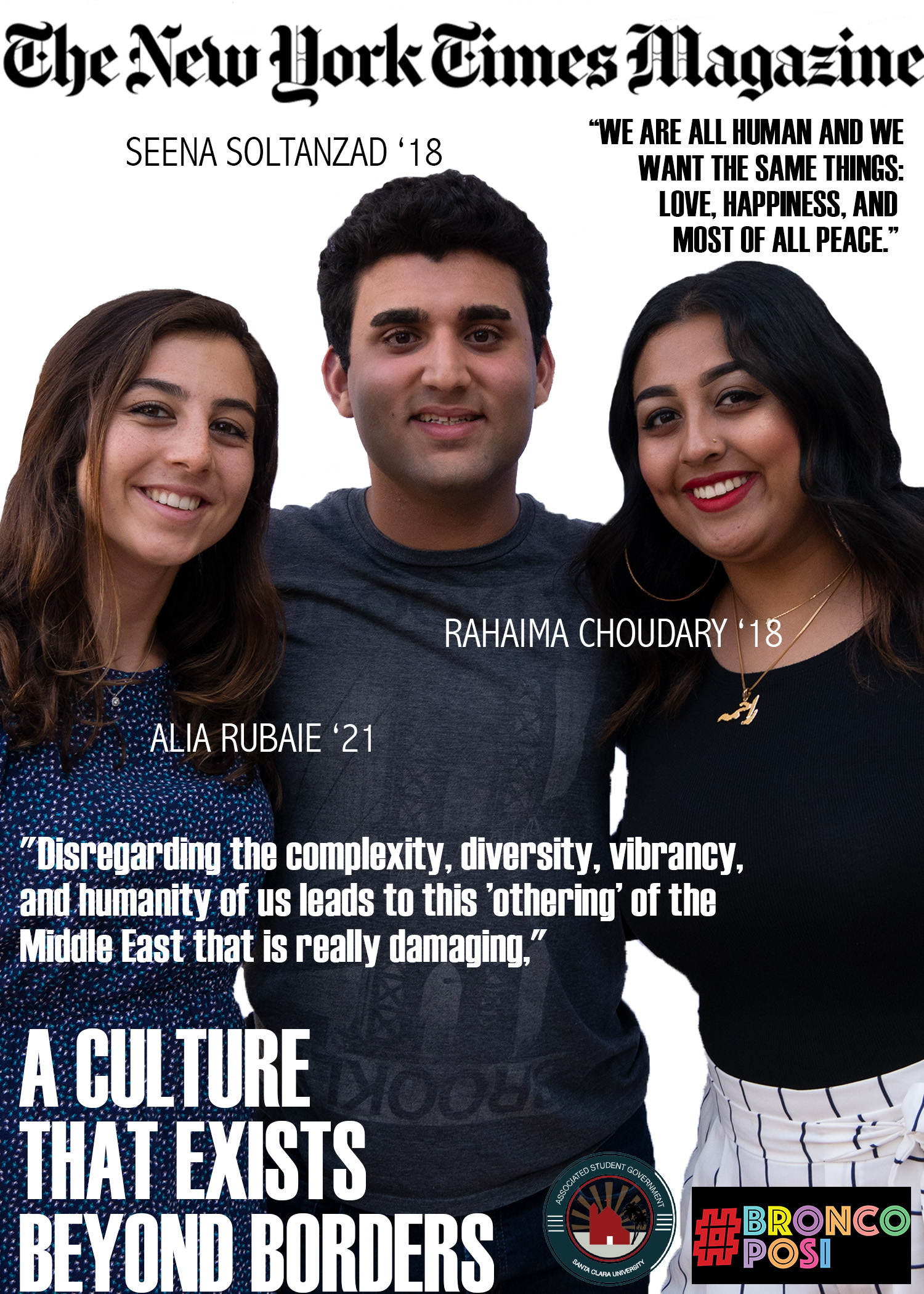 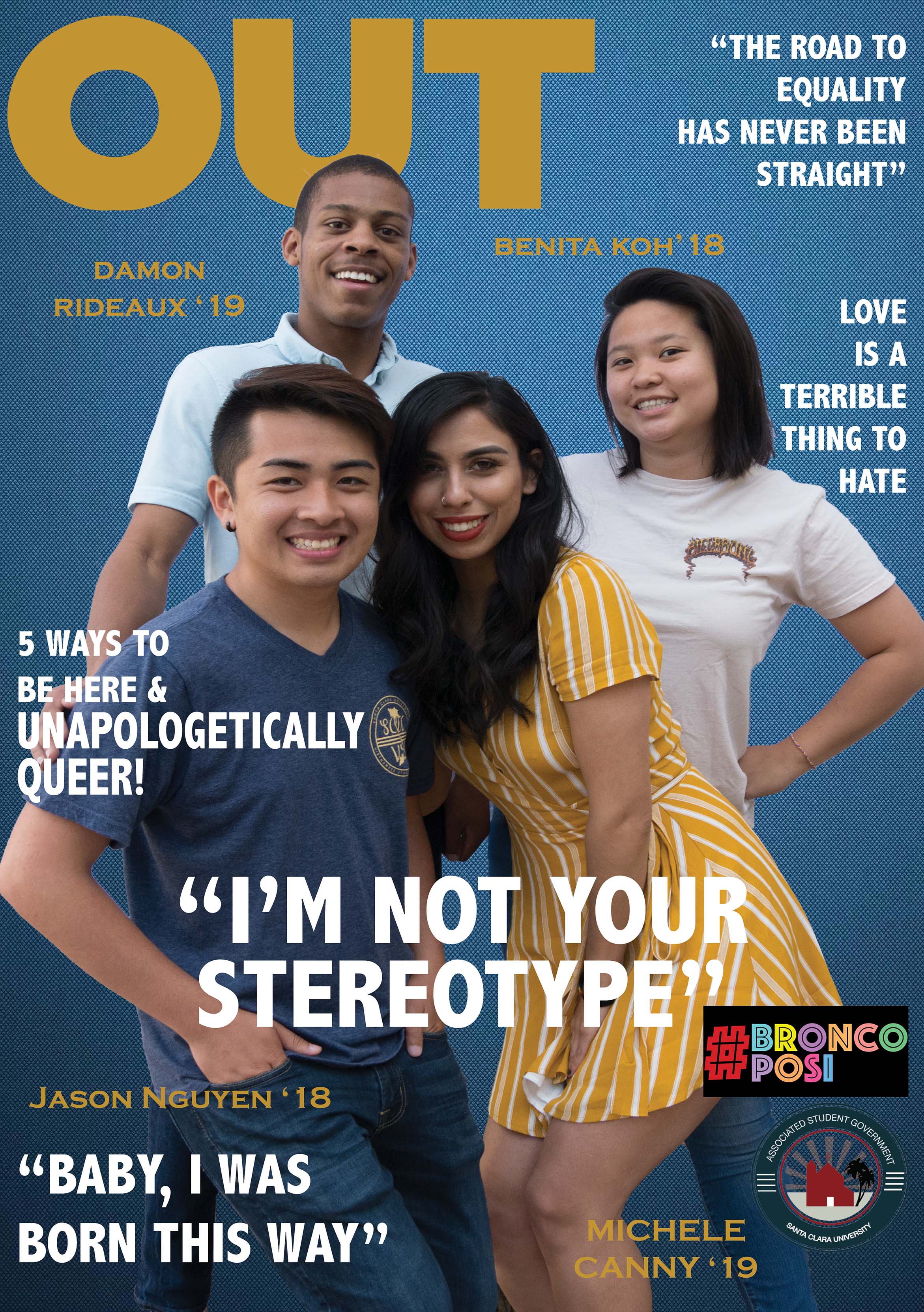 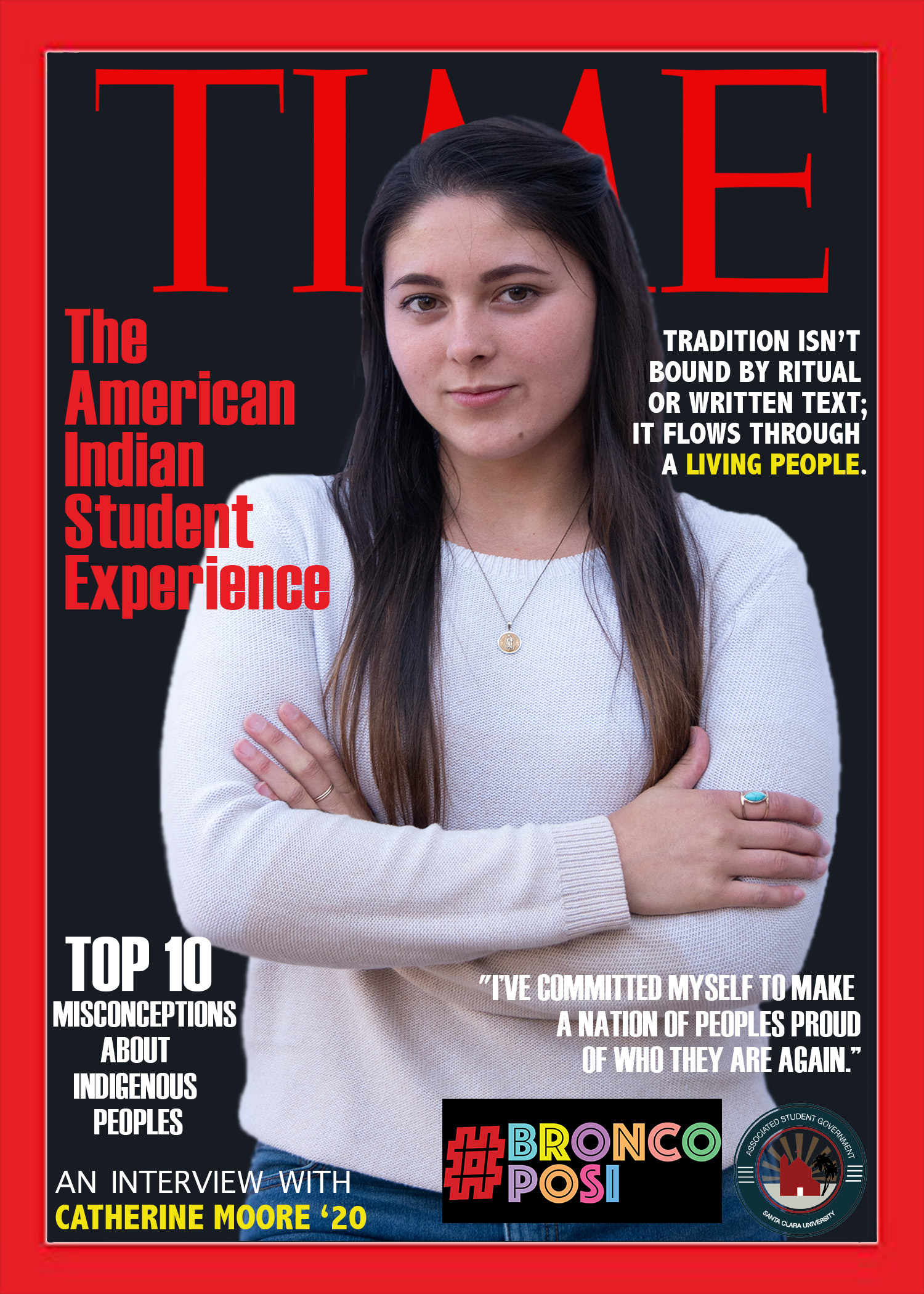 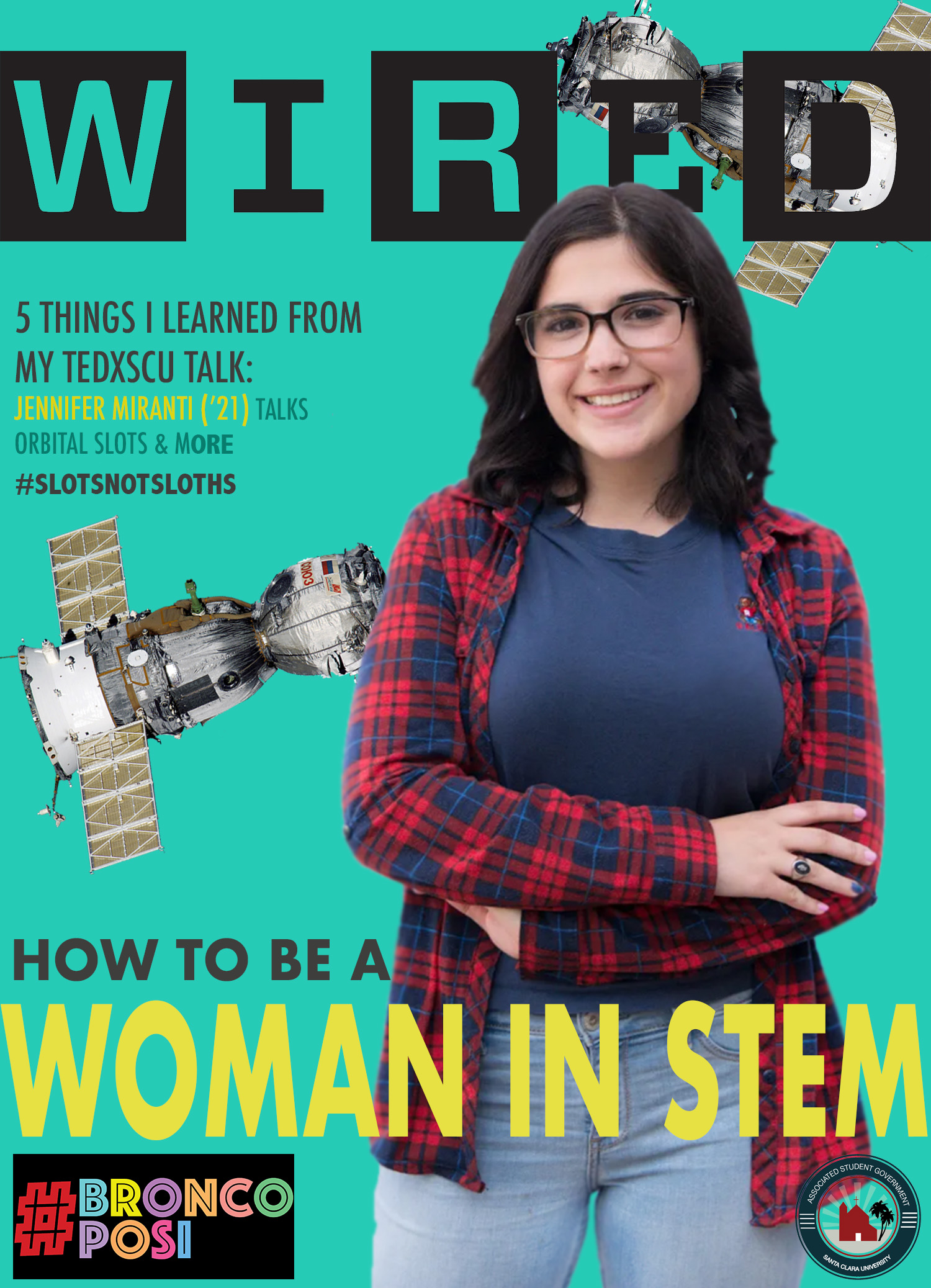 The #BroncoPosi initiative launched by the Associated Student Government (ASG) is inspired by the popular #BodyPosi movement. In light of recent incidents of diversity and inclusion both at Santa Clara University and throughout our nation, ASG has created magazine covers that serve as informative representations of how we as students should strive for education and not ignorance.

The students who were brave enough to be featured on the covers each shared what they felt should be known about their identity. #BroncoPosi's purpose is to encourage love, promote positivity, and increase solidarity among all groups -- however similar or different -- and it addresses the many stigmas and stereotypes that minority groups face on campus.

It is more than just our racial identity. Our blackness dictates how systems impact us, how people treat us, and how we internalize our everyday experiences. We are 12% of the American population but only 3% of the SCU community. Igwebuike is one of the founding clubs of the Multicultural Center (MCC) and for the past 50 years have made great strides to increase the voice, presence, and academic success or our Pan-African students. We are your classmates, friends, CFs, class senators, and most importantly members of the Bronco family who deserve to feel supported and included.

#BroncoPosi is more than just a hashtag or poster: it is apart of a bigger movement to foster a campus of inclusion by recognizing that diversity broadens intellectual and experiential capital in both academic and social settings at SCU.

Muslims around the world are discriminated based on the notion of ‘terror,’ unbeknownst to the discriminator that Islam preaches peace, integrity, and compassion. The understanding that a believer of Islam is like any average, common person of society is not only yet to be reached, but also vital for the inclusion of Muslims in our modern day society. A woman in a hijab is no different from a woman without. The need to differentiate between the existences of Muslims and non-Muslims is unnecessary and detrimental to the livelihoods of the current and future generations of Muslims. Representation for the Muslim people means the ability to move past the ignorance of many and move toward acceptance by all.

We come from a more unique background than the majority of SCU students that can put us at a disadvantage when it comes to connecting with the lifestyle and mindset found on campus. Whether it be with our peers or professors, there is a need for representation to show and inform why some of us come to this school and are so different from others. With the way we talk, walk, and dress there has to be a method to teach people from varying backgrounds not just of our own group, but of each other. There are aspects of SCU culture that some incoming students do not understand because they have never been exposed to it in their home environments. As a minority it is imperative that the voices and outlooks of our organizations are heard in order to best develop the welcoming campus atmosphere that Santa Clara University claims it seeks to achieve.

I hope with this #BroncoPosi initiative it will remind students that there is more to the school than just themselves, there are whole other communities and organizations involved in the university that help make it the great school that it is. Just imagine how.

What many people don’t realize is that there is a very strict societal definition of what it means to be a man. Males tend to take that definition really seriously because if we don’t, we’re not considered “manly enough” and are branded as something other than a “man.” There’s a hashtag on Twitter called #masculinitysofragile which calls out males who behave in a stereotypical way that perpetuates toxic masculinity. Because of the strict definition of masculine, males tend to have very fragile masculinity; it can be shattered easily if they go against what they believe is masculine. Toxic masculinity is a real problem in our society. It’s time that we define masculine as something new.

I hope people actually become aware when they perpetuate toxic masculinity. I’ve seen it a lot on campus and it can actually have negative effects on someone if that person is exposed to it for a long time. I hope #BroncoPosi changes the way masculinity is viewed on campus.

For decades, major media sources in the United States have failed in giving Americans a proper representation of the Middle East and its people. The Middle East is unique in that it is home to over 20 countries, all containing various races, religions, and traditions. Additionally, the Middle East is also the birthplace of the three major religions: Judaism, Christianity, and Islam. For this reason, these religions share more similarities in beliefs and rules than people give credit for.

Due to the tragic events of 9/11, people now associate Middle Easterners as violent, oppressive, and unstable. However, for the majority of people, this is not the case whatsoever. Family, loyalty, and helping others are integral values to the Middle Eastern culture that are often left out of any news coverage. In attempts to take steps forward in the portrayal of Middle Easterners on media outlets, we must begin with a change in mindset and an openness to see another perspective.

Inspired by Out magazine

The Rainbow Resource Center (RRC) stands as a constant reminder of the misrepresentation and neglect of the LGBTQ+ community at SCU, and in the greater society. We’re not confused, we’re not going through a phase, and yes, we’re sure. We weren’t taught to be like this, and we’re not doing trans/gay/queer/non-binary just because it’s trendy right now. We were born like this. And it’s a blessing.

Accurate representation of our community feels like a giant hug -- it’s about acceptance and validation. It’s about seeing a public statement that tells us we’re welcome. We’re real and we exist. Knowing that others see us means that our existence can be celebrated. And trust us, we know how to celebrate.

For me, seeing acknowledgment and representation is better than my birthday. I remember seeing a girl/girl couple for the first time and thinking, ‘Wow, this is okay, and I can do this.’ I hadn’t come to terms with my sexuality yet, and it was a matter of acceptance and validation. Even at 18, when I had been out for 3 years, I watched the first show centered around the experience of a high school sophomore coming to terms with being a lesbian, and it was the most liberating thing I have ever see (watch Everything Sucks! on Netflix). I cried every episode. So for me, acknowledgment and representation is like a hug. It tells me, ‘You’re okay. You’re beautiful. You don’t have to be like them. You preserve individuality, and you are so important." I only hope that one day, every letter in LGBTQ+ feels that same hug, too.

The Native American Coalition for Change is dedicated to the education and understanding of American Indian culture and tradition. We strive to be an active, living group of Native students and supporters that wish to dispel stereotypes by our presence on campus and aim to represent those who do not have a voice. One major misunderstanding of American Indians, unfortunately, stems from the history taught through a biased lens in many schools. Most students don’t have the opportunity to learn about American Indians outside of their history class, often resulting in the wrongly-held belief that [contemporary] Natives are [nonexistent] an extinct species. This belief is incredibly disheartening when you realize that the American Indian community is indeed very active today, celebrating their culture through music, dance, and food. This is only one misunderstanding that the Native American Coalition for Change is excited to dispel, simply through living and breathing as an active community of American Indians.

We believe that #broncoposi is just one positive way to increase the visibility of the students here at SCU, highlighting our unique cultures, backgrounds and passions as we live and work together.

Science, Technology, Engineering, and Mathematics (STEM) is a tough field for anyone, but it’s even harder when you’re looked at differently than your peers. Women in STEM have to constantly be aware of this because we see it in our lives every day in this male-dominated field. No matter if you’re Ginni Rometty, CEO of the computer manufacturing company IBM or a student studying in STEM, women are a minority in this field. Big or small, our differences shouldn’t be contributing to the downfall of one group, but should instead be what we use to raise us all up to create a world full of innovation.

At SCU I strive to be inclusive to everyone and deconstruct stereotypes about all groups. I hope this idea spreads further so we start seeing more women in STEM classes and more women in the field.

All pictures for this initiative were taken by Beshoy Eskarous, Class of 2020.