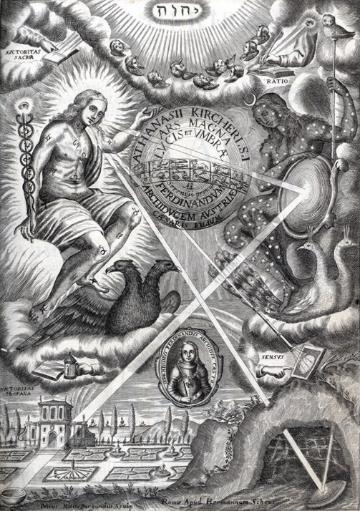 Archives & Special Collections is pleased to announce a new exhibition, Spectacles of Learning: The Passage of Light in the Work of Athanasius Kircher, S.J. Fr. Kircher of the Society of Jesus (1602-1680) was a teacher of Mathematics at the Jesuit Roman College, but his interests were wide-ranging. His celebrated Museum at the College attested to this, as he capitalized on objects brought back by Jesuit missionaries from various places around the globe. Fittingly, a 2004 biography on Kircher is titled Athanasius Kircher: The Last Man Who Knew Everything.

Kircher was a man devoted to the search for knowledge. He wrote beautifully illustrated books on the many subjects that interested him, including hieroglyphics, magnetics and astronomy. He also put his scientific knowledge into practice and was an accomplished inventor. His creations include sound devices, a magnetic clock and the first megaphone.

Kircher’s intellectual pursuits ultimately were motivated by the idea that the visible alluded to that which could not be seen, that divine authority influenced the secular and the profane. He searched for a universal truth that connected theology and science. Spectacles of Learning: The Passage of Light in the Work of Athanasius Kircher, S.J. focuses on Kircher’s use of symbols as a means of illuminating potential networks of understanding. Through the show, we follow Kircher as he creates a path through enigma, to what remains mysterious yet somehow knowable in theology and science.

In Baroque Europe of the seventeenth century, Fr. Athanasius Kircher of the Society of Jesus was a teacher of Mathematics at the Roman College. A renowned polymath, he established a museum to reflect his vast interests, which capitalized on objects brought back by Jesuit missionaries from the far-flung corners of the earth. His thirty-six books, many heavily illustrated, explore topics as wide-ranging and esoteric as astronomy and magnetism, hieroglyphics and cryptography. Experiments in optics inspired his re-design of the magic lantern, a precursor to the technologies of the slide projector, movies and virtual reality. Kircher’s inventions educated in part through entertainment, like his plan for a statue fountain that introduced principles of hydrology to the less technically inclined.  His creations⁠—many of which he placed in his museum⁠—drove scientific innovation. They displayed humanity’s desire to understand how the complexities of the world align, and to uncover deeper theological truths.

Symbols have a tremendous power to communicate meaning. This exhibition explores how Kircher bridges theological, mathematical, scientific and artistic discourses and practices. Kircher’s ability to find common ground was astounding. While noble women and men strolled through their palazzi in Rome and the nascent professional classes tried to make sense of the beginnings of globalization, Kircher pushed the frontiers of knowledge and stimulated discussion among scholars in the Republic of Letters developing new fields in scientific inquiry.

While light and darkness in the age of chiaroscuro find supreme expression in the painted work of Caravaggio and Rembrandt, it was Kircher’s genius to promulgate the visual and spiritual vocabulary of the Baroque in cross-disciplinary fashion. This heritage continued in current technology’s promotion of entertainment and immersive experiences. Virtual reality headsets augment human sensual perceptions through interactive simulations. In digital format, these goggles present old or new worlds, while simultaneously offering textual, graphic and pictorial overlays. The capacity to supplement virtual reality with visual and textual add-ons provides the viewer with multi-dimensional experiences. Utilizing illusion and allusion to introduce topical diversity, current technology mimics the Baroque period’s penchant for expanding the picture plane through a dramatic use of perspective, to communicate human virtues and values.

An incredible example of this methodological and aesthetic interplay is evident in Br. Andrea Pozzo, S.J.’s 1688-1694 fresco, The Glorification of the Mission of the Society of Jesus (see the image below). Painted on the ceiling of Sant’Ignazio in Rome, this work emerges from the church’s massive stone arches, and erupts in an open play of color and form that define a complex pictorial narrative. Pushing the limits of perspective, Pozzo’s masterpiece depicts the spiritual genealogy of contemporary Jesuit global apostolic labors. Sourced in miraculous irradiating light, Christ’s redemptive sacrifice on the cross is the prime propagator of God’s divine love.

Pozzo often visited and gave tours of Kircher’s extraordinary museum. In the super-ambitious ceiling portrayal, divine all-embracing love envelops the heart of St. Ignatius and then his followers, before redounding to the four corners of the world. The Saint’s apotheosis transports him to heaven—a process of theosis or deification, to which all humans are called. Pozzo presents the Jesuit passion to participate in the historical and theatrical drama of the Society of Jesus as a key contribution to the dramatic unfolding of salvation history. Utilizing his ability to place mathematical advancements at the service of artistic need and an exuberance of vision, Pozzo draws the viewer into new worlds. 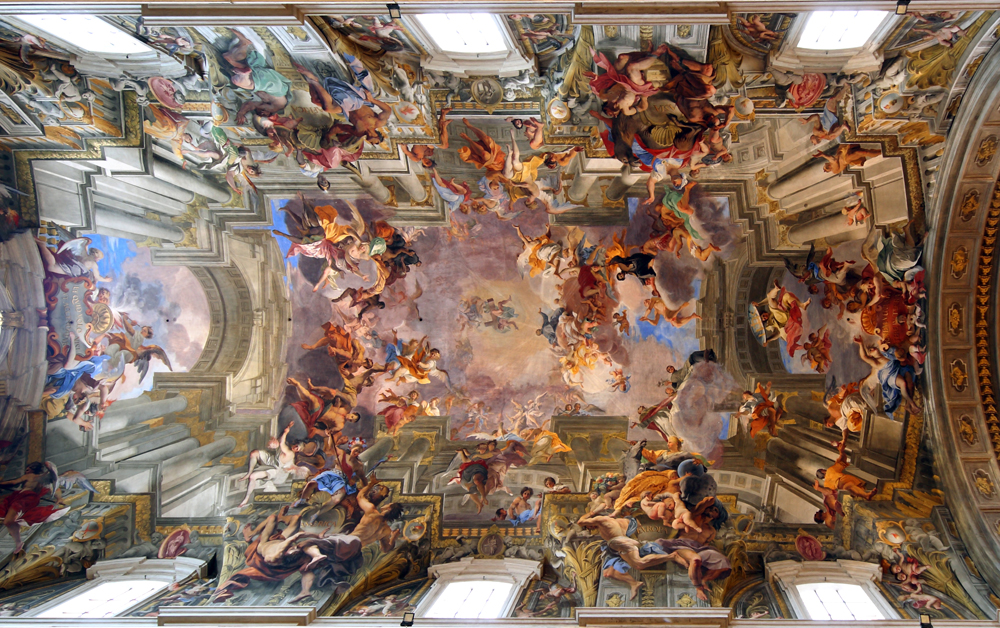 The gallery space is on the third floor of the Learning Commons and Library, next to the Archives & Special Collections Reading Room. Exhibit hours are 9 a.m. to 7 p.m. daily when the learning commons is open.