Frank Sinatra Artist-in-Residence W. Kamau Bell sat down with Chicana activist Dolores Huerta to discuss the new documentary that tells her story and bears her name.

Frank Sinatra Artist-in-Residence W. Kamau Bell sat down with Chicana activist Dolores Huerta to discuss the new documentary that tells her story and bears her name.

Following a screening of the film Dolores on April 30, Frank Sinatra Artist-in-Residence W. Kamau Bell joined Chicana activist Dolores Huerta in conversation in Louis B. Mayer Theatre. Huerta is best known for her work organizing the California farmworkers in the 1960s through a intersectional effort that brought together the Chicano Movement, the Civil Rights Movement, gay liberation and US-based LGBTQ social movements, and the late 20th century Women's rights movement.

Bell and Huerta discussed a range of topics including the new documentary, raising 11 children on the front lines, the #MeToo movement, and her work today with the Dolores Huerta Foundation. Here are some of the highlights:

W. Kamau Bell: First I wanted to ask you, what was it like the first time you saw this documentary?

Dolores Huerta: Well, overwhelming I guess is the word. I didn’t really have a lot of input into the film. I was too busy campaigning for Hillary Clinton. I wasn’t able to work a lot with the filmmakers and there was a lot of footage that I had never seen and, I’m sure like many of you in the audience, I was moved to tears with the footage in the film.

I was kind of hoping it would include some of the work that we’re doing today. My organization, the Dolores Huerta Foundation, we’re working on trying to stop the school-to-prison pipeline. I’m working with parents so they can stand up to the school districts and demand that they give our children of color an equity education. Because they keep using the word “dropout” but it’s not “dropouts,” it’s push outs. We have the largest number of people imprisoned in California than any other state. We have the largest number of people imprisoned in the United States of America than any other country in the world—including huge countries with billions of population like China. How is that possible? So we have to stop that.

WKB: So what you’re saying is, we can expect a sequel? Because at 88 years old, you are still doing work right now.

WKB: So when you watch it and you say you didn’t have control over how it was put together, I imagine that has to be frustrating. Was there anything that surprised you that was in there?

DH: Well the footage of Cesar and myself and the conversations that we had. I had never seen that footage. So that was very amazing to see that. Also, reflecting back to my work with the farm workers union, there were a lot of things I said in the movie that I don’t remember saying. But I’m really glad that I did say them.

WKB: You can’t say that you were misquoted when it’s on film, right?

WKB: Was there anything, where if you did have control, that you would’ve taken out?

DH: I do want to say this, there was a lot about my leaving my children. But I will say I took my children with me as often as I could. And in fact, when I went to New York City, I took them all. I took all my kids except Camila, my youngest, because she wasn’t born yet.

WKB: You and your excuses, Dolores Huerta. Not born yet…

DH: In the farmworker movement, we had daycare for our kids. We had a Montessori school. We had people who took care of the kids. So the kids were never alone. The other thing, and I do want to share this, my son Ricky, who is not here with me today, but he likes to (joke), “Yeah, my mother abandoned us in the parking lot of a Safeway store with a stack of leaflets to pass out to people.”

He also says, “We had to share our mother with the world, but our mother shared the world with us.” So all my kids, they grew up great. So I like to say to all the parents, take your children to the marches. Take them to the protests because that will prepare them for life and my kids grew up great. 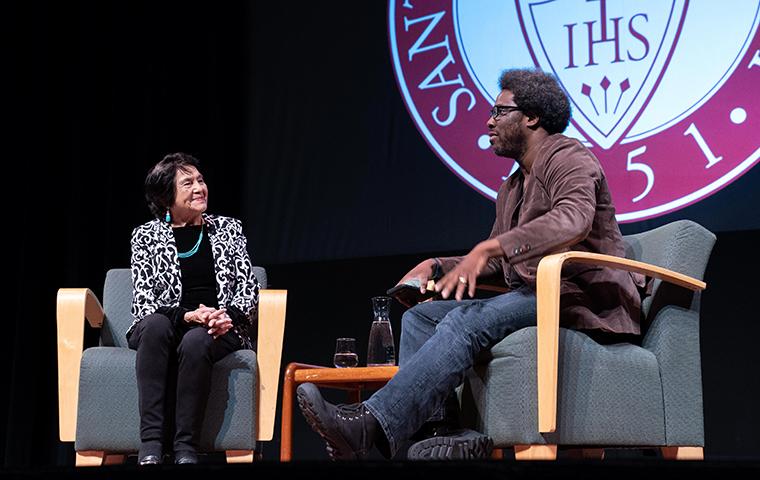 WKB: I’ve heard interviews with you and, there’s an inherent sexist narrative around, “But you abandoned your children,” that as a man who has kids, never hears. It’s that I’m the breadwinner. What do you think about that?

DH: I think it’s unfair to women. I think women and families—and men also—need to demand that we have early childhood education for all of our children. It should be free. Camila Chávez was the biggest crybaby in the movie—she’s the director of my foundation—I reminded her when she was going to Mills College and she’d call me from the dorm and said, “Mom, you’re not going to believe this. There are some girls who are crying for their mother.” And I reminded her of that.

WKB: I thought the whole film was relevant to today. I think you’re living proof of the film being relevant. But there’s the part about the talk of progressiveness and intersectionality. Those are buzzwords now. Why was it important back then to be clearly intersectional with the work?

DH: Well in order to be able to win the boycott, we had to ask everybody to help, right? So we went to the women’s movement, to the environmental movement, to the LGBT movement. Of course we went to the—in terms of the black community—we went to Harlem and said we need your help and they said don’t worry. The Puerto Rican community, they said, you don’t even have to come, we’ll take care of it. And they did. Everybody came together to make it happen.

I think it’s the same way today. I think we all have to support each other in our movements because we are the majority. We have to work together to make sure that we get the justice that we are fighting for, for our different groups that are working.

WKB: The movie talks about how you were basically written out of history and the movie is here to correct that narrative. There’s a part in the movie when you’re sitting down with Cesar Chavez and the interviewer is like, “why would you send out a woman?" And she asked it like you were going to get hurt. How much did that bother you?

Don’t expect somebody else to do that for you because that wouldn't make our women strong. I always like to say that when we look at the animal kingdom—and of course we’re at the top of that kingdom—who are the most ferocious? The females or the males? Look at the lions, right? The females are the most ferocious. But somehow in our society women are taught to be victims and we’ve got to change that so women know that they’ve gotta be strong and that they can be powerful and that they have to be in decision making positions. Coretta Scott King said, “We will never have peace in the world until women take power,” and I think that’s true. But I change that and say, “until feminists take power.”

WKB: I have so many questions just from what you just said. Right now, you’re talking about women claiming the power, and we’re maybe not in the middle of, but the #MeToo movement is in the news all the time. What are your thoughts on the #MeToo movement?

DH: Long overdue, long overdue. And I hope it doesn't stop with just sexual harassment. I hope it goes onto equal pay for women, it goes onto the way that women are victimized in so many different ways, the way women are disrespected in so many ways—domestic violence. As we sit here right now, a woman somewhere is being raped, beaten, or murdered—as we sit here right now. And that has to stop.

Somehow we’ve got to include in our curriculums, in our schools, that women have to be told that they’re strong, that they can be decision makers. We also have to teach men, little boys, that they have to respect every single woman as if that girl was his sister or his mother. We’ve got to change this culture of violence, this culture of domination, and I think we can make it happen, but men have to be taught how to be feminists from the time that they’re little boys.

WKB: There are so many historical figures in here. To see you next to Robert Kennedy, especially on that fateful day, and you tell the story today about the last thing he said and how it’s impacted you.

DH: In June—June 5 Robert Kennedy was shot and he died June 6. This is going to be the 50th anniversary of his assassination, so I would hope that somehow here—he was, as we know, Catholic. He did the rosary every single day of his life. Hopefully they will do some kind of a commemoration here for Robert Kennedy. Robert Kennedy was in Bedford Stuyvesant in New York City with the African American community, advocating for housing. He was in Appalachia with the poor people there, the coal miners. And of course he was with the farmworkers.

I think he set a really high standard for what people in politics and in government should be like. I like to say to everyone please remember the last words he said before he was assassinated: “We have an obligation and a responsibility to our fellow citizens.” I’ve been repeating that because Ive been urging people to get involved, please participate. Please not only vote but go out there and campaign for progressive candidates because we need to, I say, build our own wall in the U.S. Congress.