Nanomaterials are in lots of everyday products, but are they dangerous? Korin Wheeler and her student researchers want to find out. Her work was recently recognized with a Henry Dreyfus Teacher-Scholar Award.

Nanomaterials are in lots of everyday products, but are they dangerous? Associate Professor Korin Wheeler and her student researchers want to find out. Her work was recently recognized with a Henry Dreyfus Teacher-Scholar Award.

They are found in thousands of consumers products, from sports equipment to cosmetics, tires and electronics, packaging and clothing, medical diagnostics and pharmaceuticals.

But these tiny nano-sized particles—which exist in nature but are also man-made—cannot be seen by the human eye. For scientists like Korin Wheeler, it’s crucial to understand and enhance their abilities to improve the environment and human health.

Now, with the help of a prestigious $60,000 Henry Dreyfus Teacher-Scholar Award, the associate professor of chemistry and biochemistry is hoping to reach her goal of developing molecular level tools to monitor nanomaterials as they move through the ecosystem.

“We as a field—scientists and engineers—are saying, ‘Let’s get ahead of this before it becomes a problem, before we make a mistake,’’’ she explained. “Then we can leverage this knowledge to build more sustainable, healthy materials.”

While some nanomaterials occur naturally, such as proteins in blood, Wheeler wants to know how the engineered nanomaterials designed for commercial uses disseminate into our soil, water, and air. Currently, there is little data available about the potential risk to human health or the environment.

“We have to make sure that we are behaving responsibly,’’ she said. “And if it’s a problem of product design, we can improve the material make-up or engineering. When that isn’t possible, we can use our knowledge to inform policy makers on how to ensure we don’t harm the environment.”

‘It could be game-changing’
In her application for the award, Wheeler wrote a proposal based partly on the history of the work she and her students have done so far.

The five-year-grant, almost all of which supports her undergraduate student researchers on the project, represents an opportunity “to go into a new direction and to do some work I had only sort of dreamed about,’’ said Wheeler. “It could be game-changing.’’

In addition to ensuring environmental safety and effectiveness of nano-enabled products, her research aims to inform the development of products to improve health, including drugs with less side effects and sensors for early disease detection.

It is a rigorous and painstaking process: The particles that she and her lab team of six to eight students study each year are extremely tiny, just 10 to 100 nanometers wide; by comparison, a human hair is 75,000 nanometers across.

“Materials that are this tiny do not behave the same way that we are used to,’’ explained Wheeler as she sat in her office. “At this size scale, quantum effects become quite important in the behavior and properties of the particles.’’

As an example, she pointed to her lab next door, where a handful of SCU students, dressed in white lab coats, were working. Wheeler walked over and opened a nearby refrigerator, removing a tray of the tiny glass vials filled with silver nanoparticles suspended in water.

Unlike silver used in jewelry, which is a shiny grey color, the colors of these silver nanoparticles span the rainbow.

“This is absolutely not what we see on the macro-scale in everyday life,’’ Wheeler said. “Yet these sensitive color changes are one aspect of nanomaterials that bring them so much potential for new technologies.’’

Making tools—and headlines
Her research has already made waves; in January, alongside SCU bioengineering lecturer Maryam Mobed-Miremadi, recent Santa Clara graduates Matthew Findlay ’17 (Bioengineering) and Daniel Freitas ’17 (Bioengineering), a predictive computational tool they developed to describe the proteins that coat nanomaterials in order to apply nanomaterial technology in medicine was featured on the cover of Environmental Science: Nano.

“It was the first time we had developed this new tool, and I was really excited about the possibilities,’’ said Wheeler.

Student–teacher symbiosis
The associate professor is among only eight U.S. academics this summer who received the Henry Dreyfus Teacher-Scholar Award, which honors excellence in research and dedication to education.

“She is young and progressive and she is approachable,’’ said former student Sarah Anderson ’16, (Chemistry), now studying for her doctorate in chemistry at Northwestern University, the same place Wheeler received her Ph.D.

Indeed, the opportunity to work with undergraduates was a key reason Wheeler chose to work at Santa Clara University.

“It’s a time when they are learning what research is about and the power that science holds—and the strengths and limitations of that power,’’ she said. “At this level, watching them grow is incredible.’’

And the students in her lab are compensated for their hard work.

Not only will the Henry Dreyfus Teacher-Scholar Award be used to hire and train new undergraduate researchers, it also will pay for them to travel to work with Wheeler’s international collaborators in the United Kingdom, and to present their work at national conferences, including the American Chemical Society.

“Sometimes,’’ Wheeler said proudly, “students from my lab are the youngest researchers at a conference, but they rock it.” 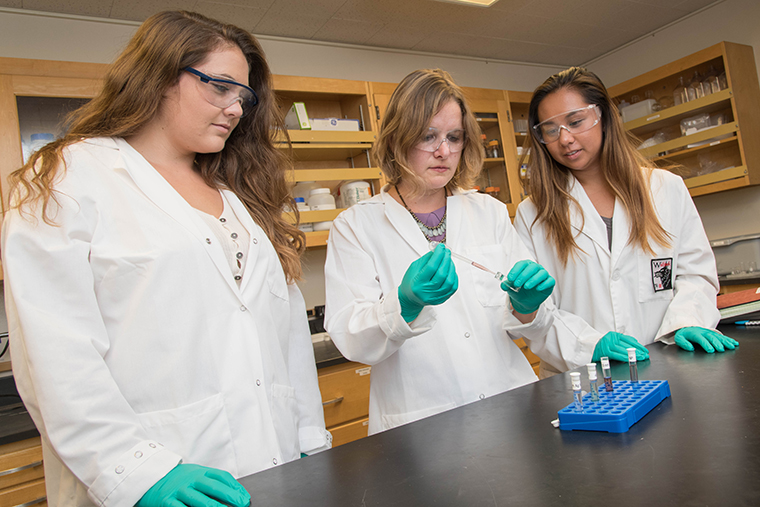 Not your grandmother’s silver: Nanomaterials are so small they often don’t behave the way scienstists expect. For example, the silver nanoparticles in these glass vials aren’t shiny gray, but a variety of colors.