Santa Clara University’s recently implemented Academic Integrity Pledge is the culmination of several years of collaborative work by students, faculty, and staff. The initial impetus came from students, who wanted academic integrity to have a higher profile at the university. Responding to these concerns, the Associated Student Government (ASG) appointed a formal committee in 2011-2012 that was charged with investigating the possibility of an Honor Code as a way to foster a stronger commitment to academic integrity throughout the university community. At the same time, several student leaders worked with the Markkula Center for Applied Ethics as Hackworth Fellows, advancing the proposals for an Honor Code through extensive research that included surveys of undergraduates, public meetings, and conversations with national experts on honor codes.

In the Spring of 2013, the University Coordinating Committee formally appointed a University-wide Honor Code Drafting Committee. The special committee consulted widely across the campus and worked collaboratively to guide a proposal through the university governance process. In Spring 2014, the Academic Affairs University Policy Committee recommended implementing parts of the Honor Code Drafting Committee’s proposal for enhancing academic integrity. As a result, the pledge was added to the Student Conduct Code in 2014. Since the 2014-2015 academic year, the Academic Integrity Pledge has been part of the Student Handbook. This was followed by a brochure about academic integrity by the Office of Student Life.

The commitment to integrity is an expression of Santa Clara University’s Catholic, Jesuit identity. The Santa Clara University community is dedicated to the promotion of values consistent with academic and personal excellence. Academic integrity is one of those values and the Academic Integrity Pledge is an important way that students demonstrate their commitment to this value. Committing to academic integrity not only emphasizes the value of a Santa Clara education, it also expresses the values that are a cornerstones of a Santa Clara education: being students of competence, conscience, and compassion who strive to fashion a more humane, just and sustainable world.

In 2014-2015, 35 faculty across 15 academic departments and programs at SCU participated in a pilot implementation of the Academic Integrity Pledge. Among the important conclusions from the pilot were the following:

Among the most consistent finding in both the SCU pilot and in studies nationwide is that students wish faculty spent more time talking about academic integrity, including expectations for citation and acceptable levels of collaboration for particular assignments. Studies confirm that merely including a syllabus statement is not enough. Rather, ongoing discussions, both in the classroom and beyond, are necessary to create a culture of integrity as one faculty member noted:

"I really like having the pledge. It does a number of things. One is that its wording really invites each student to make a deeper personal commitment to academic integrity. Another is that it's short and sweet—it isn't onerous and boring. Also, it's a great tool to get a conversation going at the start of the quarter and to allow an easy return to that conversation [about academic integrity] at different key spots throughout the quarter."

Although students affirm the Academic Integrity Pledge by virtue of enrolling at Santa Clara University, students have multiple opportunities to reaffirm the pledge in individual courses and in Residential Learning Communities (RLC). Throughout the academic year classroom discussions and assignments, as well as campus programming, provide students with opportunities to discuss academic integrity and to reaffirm the Academic Integrity Pledge. 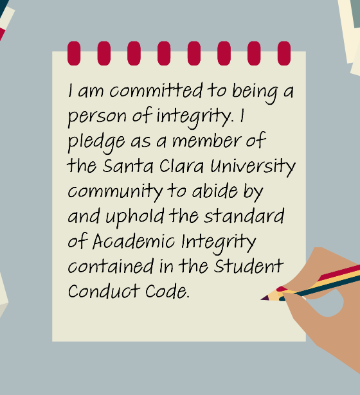