The Young Are Leading The Revolution

The Young Are Leading The Revolution

Over the past weeks we have seen massive forms of collective action; from protests to marches to calls to action -- via statements, petitions, and manifestos -- that demand accountability, reform, and justice for Black communities. Black Lives Matter demonstrations nationally and internationally have awakened the willfully ignorant and colorblind to the realities of institutional racism, anti-Blackness, and racial violence deeply seated in the criminal (in)justice system, and in countless other structures and institutions in the United States. In witnessing, supporting, and joining these demonstrations of protest and activism, we are summoned to take responsibility for addressing and eradicating anti-Blackness and the vicissitudes of racism. Keen on taking on this task head on are young people, especially Black youth.

Young people are -- and always have been -- key protagonists and agents of change in leading the revolution. Significant civil rights reforms in the 1960’s were led by young people, specifically Black youth. In the context of the Black Freedom Movement in particular, Black youth played an essential role in desegregating public spaces, including schools, decolonizing universities by establishing Black Student Unions and Black/African American Departments, and ensuring the Black vote. We are indebted to the Black youth in the movement for the civil rights that we have achieved as a nation.

As an adult and non-Black person of color, a Chicana, I look to and am accountable to the youth activists -- both in the past and in the present -- leading the revolution that will bring us closer to freedom. Because, as a youth organizer once shared with me while campaigning with Coleman Advocates for restorative justice practices and the removal of zero-tolerance policies in the San Francisco Unified School District, which were disproportionately targeting Black and Brown students: “The closest thing to freedom is the struggle for justice.”

Indeed, as Black Panther Party co-founder Huey P. Newton underscored in an 1968 interview with Students for a Democratic Society

As Black youth challenge the injustice and dehumanization of years of racial violence, they inherit the long legacy of resistance against the very systems and ideologies that oppress and dehumanize Black lives.

At present we are seeing the power of youth rise up. Youth are taking center stage in the context of the Black Lives Matter movement. Many Black Lives Matter organizers and activists are young people under the age of 18 and young adults, predominantly college students. In bringing justice for the murder of George Floyd, they have made urgent demands to defund police departments across the nation, for police free schools, and for institutional reforms within education systems to address the entrenchments of racism and anti-Blackness. All of this against a backdrop of a pandemic where young people were taking on greater roles and responsibilities to care and provide for their families because they seemed to be at lesser risk of contracting COVID-19.

The youth -- as my experiences in youth organizing spaces and research on youth activism demonstrates -- lead the revolution. The young agitate for revolutionary change, transformation, and justice,for a more humane and humanizing world. A world  where Black and Brown youth are embraced and supported in their learning, instead of being disciplined, punished, and funneled into the juvenile (in)justice system: from schools to prisons. A world where they can grow up unburned by the racial violence at the hands of police and white vigilantes who will cut their life short. Trayvon Martin, Tamir Rice, Aiyana Stanley-Jones, Nicholas Heyward are a few among the many Black youth who have been killed in recent years. Let us acknowledge, however, that the United States has a much longer history of murdering Black and Brown youth. 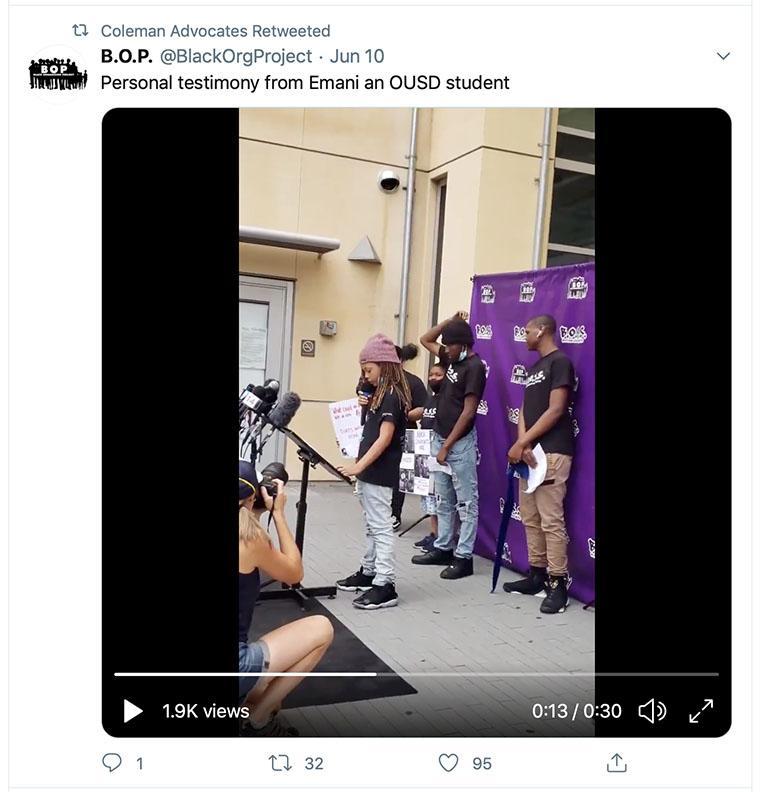 As we, adults, reckon with our nation’s history and contend with the permanence of racial violence in the present, young people are not idly standing by. Black youth are not frozen by their anger or pain, as they mourn and grieve. And non-Black youth of color and white youth, who are sociopolitically conscious, are not paralyzed by guilt or shame, or the puzzlement of why this is happening or what they can do. The youth are doing the work we, as adults, ought to be doing; building multi-racial coalitions, educating themselves and others, keeping each other accountable, engaging in solidarity-in-action, being accomplices and not just performative allies, and challenging the very same institutions that often misrecognize them as apolitical, apathetic, and silent because of how the intersections of race and age are constructed to disempower and disenfranchise youth.

Young people are calling us in, they are calling on all of us, especially adults situated within positions of power, to engage and take seriously the task of transforming institutions and eradicating institutional racism and anti-Blackness. Black and Brown student activists at Santa Clara University have continued to engage in this work to transform and decolonize the university since 1968 through various iterations of Unity Movements. A recent example of student organizing is seen in a petition organized by Igwebuike (Igwe), the Pan-African student organization at SCU, that garnered more than 13,000 signatures, and calls for the university to “change their relationship with their local police department and demand a new system that actively protects Black lives.” Within and beyond the university, youth of color have never ceased to resist and push to dismantle the very systems that oppress them.

Young people are keen to educate, agitate, and organize themselves to bring about the changes they want to see, and they will continue to do so because the intersections of race and age position them, their voices and lived experiences, on the margins. Imagine what the United States could be or become if Black youth’s lives mattered? Imagine if youth, as young as the age of 16, were granted the right to vote? Activism, organizing, and movement building -- and protest -- are important and critical avenues by which youth make their voices heard, because when power-holders say “we hear you, we see you,” youth know few of them are listening, and even fewer are acknowledging their whole being.

As we experience the present, let us not move on from this moment, but instead move forward with and alongside Black youth and allies who are organizing, expanding their activism and movement building for racial justice and the transformation of our country apart from the way things are and have been, and toward the way things can and must be, in ways that honor the dignity and humanity of Black lives. The young are leading the revolution; a revolution that attests to the power of youth.