For the Students, For the Future: Iranian Women Youth Activisms

Encouraged by the Center for Arts & Humanities Blog Series's theme on memory and movement/s, I humbly offer a memory, and a reflection on an important moment that catalyzed a movement. In writing this reflection, and being most critically mindful of my positionalities, I acknowledge that there is a growing body of scholarship centered on Iran, Iranian Americans, and the Iranian diaspora. Equally important is for me to recognize that I am not an Iranian woman, and that it is Iranian women, scholars, and activists, especially situated in Iran today, who must be centered in conversations on the current movement – platforms and spaces must be created for those voices to surface both within and beyond Santa Clara University. It is my heartfelt intention that this reflection can contribute to such creating/creative efforts in a meaningful way, and that it is received as a mere reflection on its links to the power of youth, especially Iranian young women, in movement building efforts. May this reflection also be an opportunity to engage with the scholarship, expertise, and experiential knowledge by Iranians, some of whom are cited and linked throughout this piece.

I visited Iran for the first time a few years ago. Eager to share with me Iran’s beauty, traditions, history, and the open-hearted generosity and warmth of Persian culture, I traveled with my spouse to Isfahan–Isfahan nasf-e jahan (Isfahan is half the world).

On our journey to a country I had never been to–excited, nervous, and striving to be most present–I recall the pilot on our direct Lufthansa flight from Frankfurt to Tehran announce that soon we would cross over Iranian airspace, and in accordance with the Islamic Republic of Iran’s laws, women are required to wear a headscarf and abide by the nation-state’s enforced dress code. I observed how other women on the flight stylishly arranged their roosaris (headscarf, hijab) and I tried my best to wrap my head and contain my hair under the rebozo (shawl) my grandmother had gifted me several years ago. It was a modest warm piece of cloth with handwoven threads of fall colors–and a reminder of my family, and my roots in México.

A few days after arriving in Isfahan, being welcomed and embraced by my in-laws and extended family, we explored the city and its landmarks: Sheikh Lotfollah Mosque, Chehel Sotoun, Si-o-se-pol, and Shah Abbas Mosque, among others. My nieces and nephews were quizzical about Mexican culture, and wanted to share with me the iconic zorrat mekziki (the Persian version of esquites) that was especially delicious and worth enjoying in the gardens of Naqsh-e Jahan Square. Seated along one of its cement benches, watching the horse and buggy circle by, my sister-in-law was approached by a young man in uniform, a member of the basij. There was a momentary back and forth exchange of words and expressions, yet my limited Farsi allowed me to understand that she was being admonished for the mid-head placement of her roosari, which she adjusted shortly thereafter, sharing that I was a guest visiting Iran for the first time and he was making a bad impression. I later learned that such an encounter was commonplace among women. In the context of Iran the basij act as the “morality police,” primarily tasked to surveil, harass, incarcerate, and inflict violence upon women. A violence that grotesquely manifested in the murder of Mahsa Amini–or Jina as she was named, known, and loved by her family. 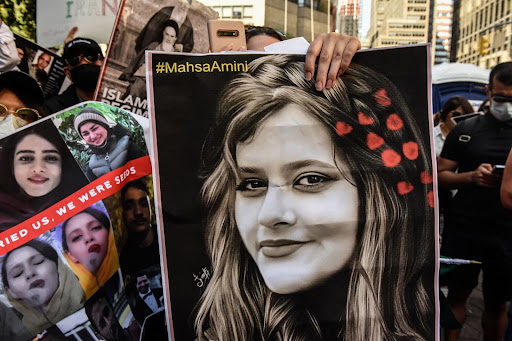 As a Kurdish Iranian 22-year old woman, Mahsa, like all women in Iran when in public, was expected to wear her headscarf in accordance with Islamic law dress code and regulations. At the judgment of the basij, she was taken into their custody, imprisoned, tortured, and thereafter hospitalized on account of the violent brutality she physically suffered. Two days later, on September 16, 2022, she was proclaimed dead (Kohli, 2022).

Mahsa’s death ignited the fire that was already brewing among young people, women, and the majority of Iranians who want change, freedom, and liberation for themselves and future generations. As I witnessed the news unfold, memories of my visit to Iran, the presence of the basij, and the varied embodiments and everyday acts of resistance among women in roosaris circulated in my mind. Tied to these memories were news and social media of women burning their roosaris, youth rising in protest, and students without headscarves writing on their school whiteboards. 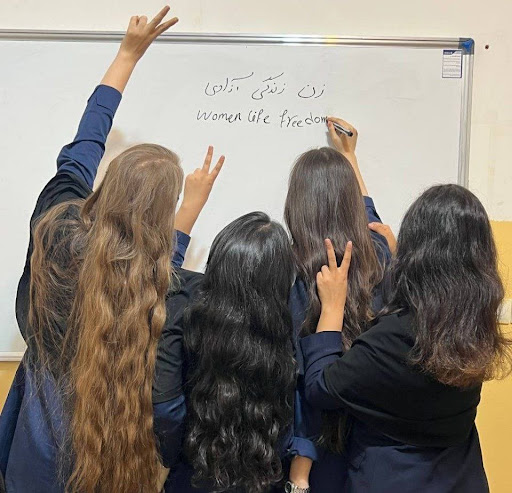 The activism, the calls for freedom, and the refusal to be and remain silent, alongside the urgency to build solidarities, raise consciousness, and respond to those who question the purpose of the ongoing movement, underscore the strength of women and youth. I am, as I always have been, affirmed by the power of youth. In every social justice crisis young people have made the difference–they have led movements for transformative justice and systemic change. Youth and women rise in (r)evolution.

As a scholar of youth sociopolitical development I am attentive to the role, agency, and power of youth in activist, organizing, and movement building efforts. What makes youth socially and politically active? What activates and sustains youth activism, organizing, and social movements? How do these experiences align to cultivate wellbeing, collective healing, and societal thriving? I am especially drawn to understand and support the sociopolitical wellbeing, and critical sociohistorical intersectional consciousness of youth, especially young women, growing up in times, spaces, and places where their citizenship– fundamentally, their humanity–is violated, illegible, and marginalized.

The movement and activism that is unfolding in Iran, while intergenerational, is predominantly being led by young people, specifically college educated young women. More than sixty percent of the universities' students are women, and this number is significantly increasing (Nazemi, 2022). Indeed, Iran is an old country with a young demographic. Approximately 60% of the Iranian population is below the age of 30 (Bakhtiari, 2020). Its youthfulness is seen in its contemporary innovation of art, music and cultural expression, blending Persian iconographies of its rich historical past with the present and popular culture (Hashemi, 2020).

The spirit of radical hope, freedom, liberation, and visionary organizing is palpably seen in the activism that is rising–resisting and refusing–the imposition of rules, violence, and silence by the Regime. Iranian youth, the majority of them young women, are expressing themselves and amplifying their voices. Youth are using all modes of media, technology, and tools to connect beyond the boundaries of a Regime, and to disrupt Western discourses of their complicity or victimhood within the nation-state. By their own means, they are protagonists–agents of change–imagining radical possibilities to grow up and experience a country otherwise. Iranian young women, and those who stand with them, are honoring past struggles–Women, Life, Freedom–as they seize the horizons of liberation.

This moment and movement marks a critical shift in the transnational and national discourse that has overlooked the power of Iranian women and young people. The humanity, collective determination, and radical hope of Iranian people in pursuit of liberation, in the struggle for freedom. Additionally, it signals for the world a prime opportunity to reflect on how the assemblages of violence in Iran reflect, and even refract, modalities of nation-state sanctioned violence, militarized policing, carcerality, femicides and youthacides (the killing of young people), and ethno-racial disenfranchisement–none of which are unique to Iran. Can we see the violence unfolding there, here too?

Furthermore, as we reflect on these intersections, the very least we can do is bear witness–and yet that is neither sufficient nor enough. Rather than asking whether the Iranian protests and social movement will bring change to the condition and circumstances in the Islamic Republic of Iran, we must ask ourselves how our actions, discourses, and policies have contributed to the oppression of women, youth, and peoples on the margins–in Iran, the U.S., and elsewhere. We must reflect on these links and connections, and orient our intentions and acts toward justice being led by Iranian women and youth, and for the people of Iran–for the students, for the future, and for women, life, and liberty.

Human and Community Ties, Arts and Humanities in Times of Crisis, memory blog
861989

The author of this post is a Santa Clara University community member who, to ensure the safety and wellbeing of their family, remains anonymous. The author sends gratitude to their sister-in-law for her support and guidance in the development, writing, and sharing of this memory and movement.