The SCU team who traveled to El Salvador to commemorate the 30th anniversary of the Jesuit massacre; from left, Paul Schutz, assistant professor of religious studies; Ray Plaza, director of the Office for Diversity and Inclusion; interim provost Lisa Kloppenberg, and senior assistant dean Kathleen Schneider. 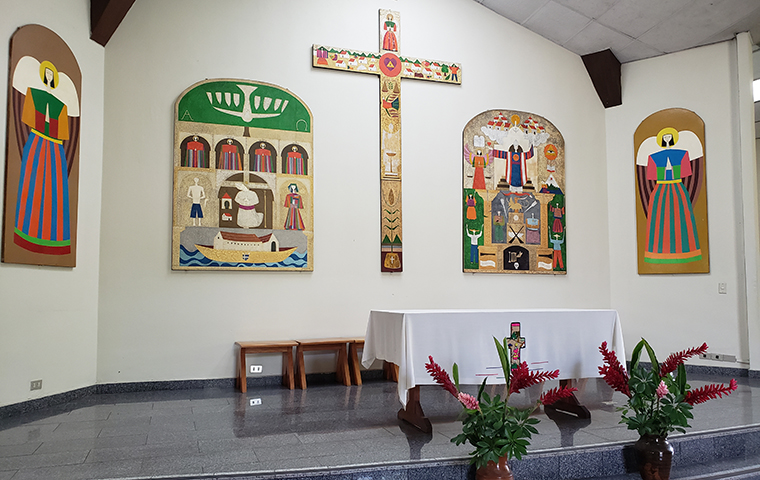 The altar of the chapel at UCA. 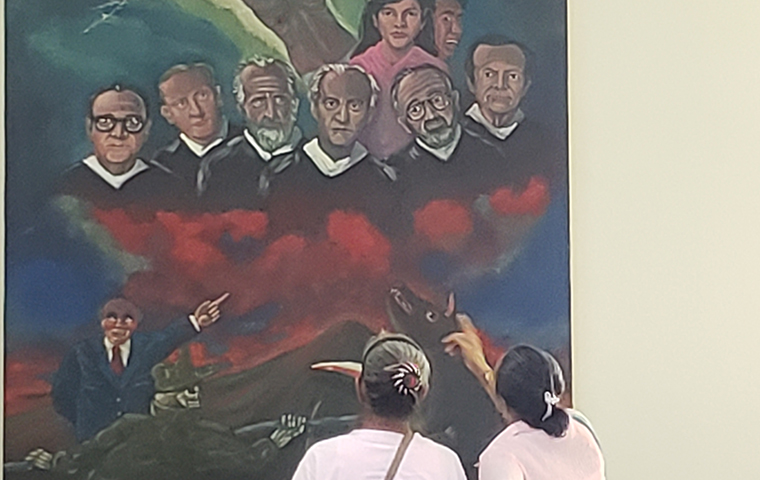 Visitors take in a powerful mural depicting the eight victims of the Nov. 16, 1989 massacre. 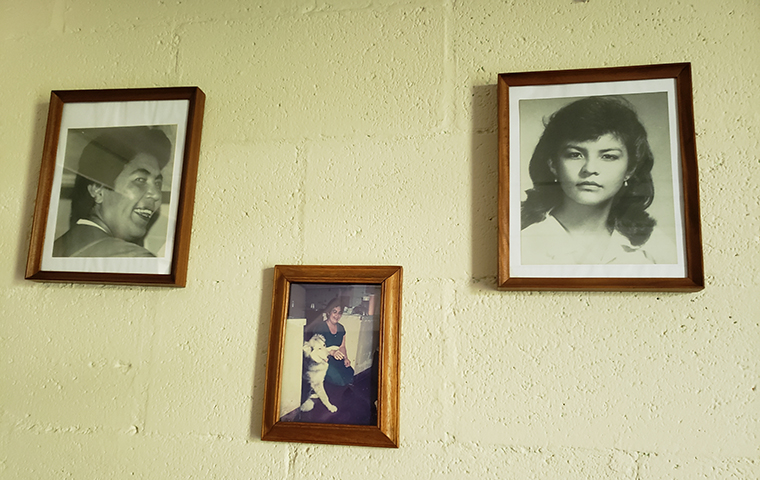 Photos of Julia Elba Ramos (right) and her 16-year-old daughter Celina Maricet Ramos, the civilians who died on Nov. 16, 1989, with the six Jesuits. 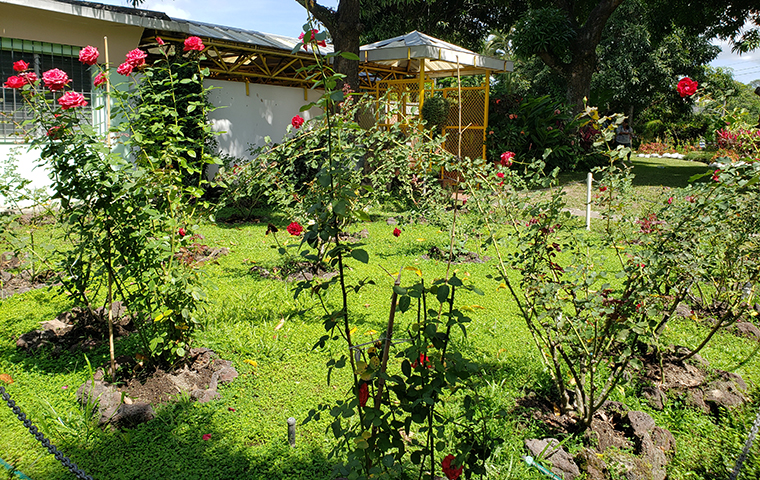 A rose garden has replaced the backyard area of the Jesuit residence at UCA where members of the Salvadoran army shot to death five of the Jesuit priests; the sixth priest was killed inside the residence. 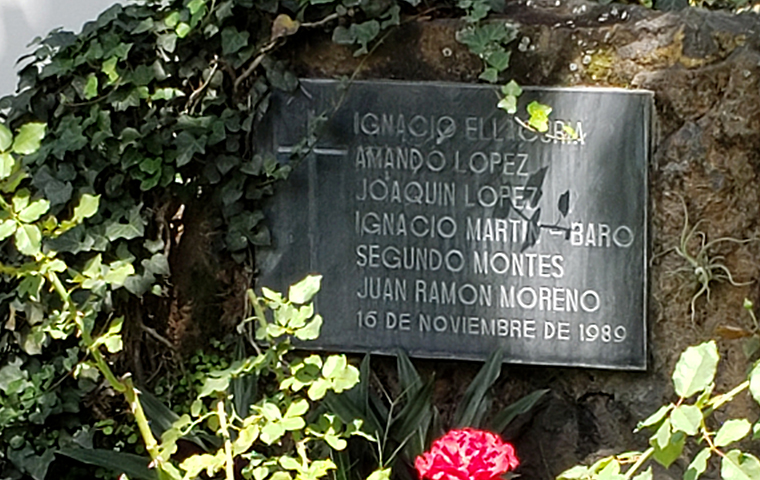 A plaque in the rose garden lists the names of the six Jesuit martyrs. 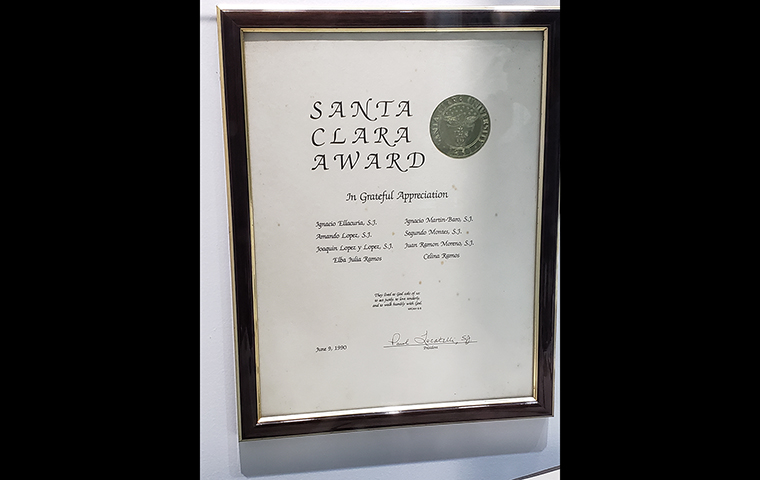 A SCU tribute to the eight victims, signed in 1990 by then-SCU President Paul Locatelli, S.J., hangs in the UCA Romero Center. 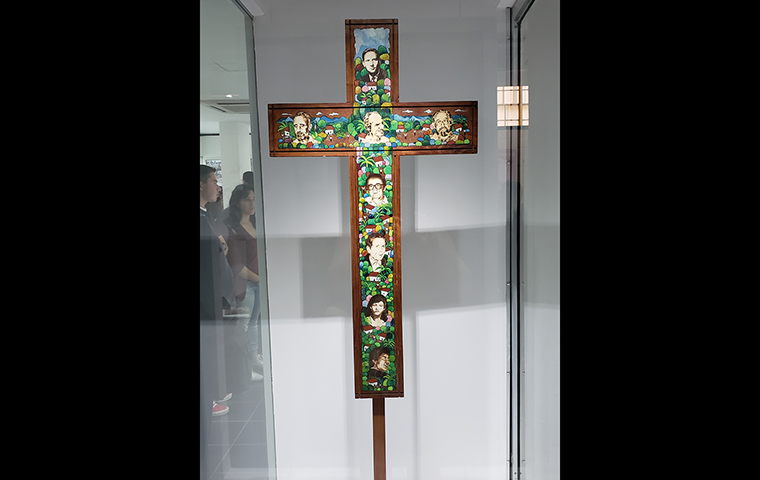 A colorful cross at the UCA Romero Center is decorated with the faces of the eight victims. 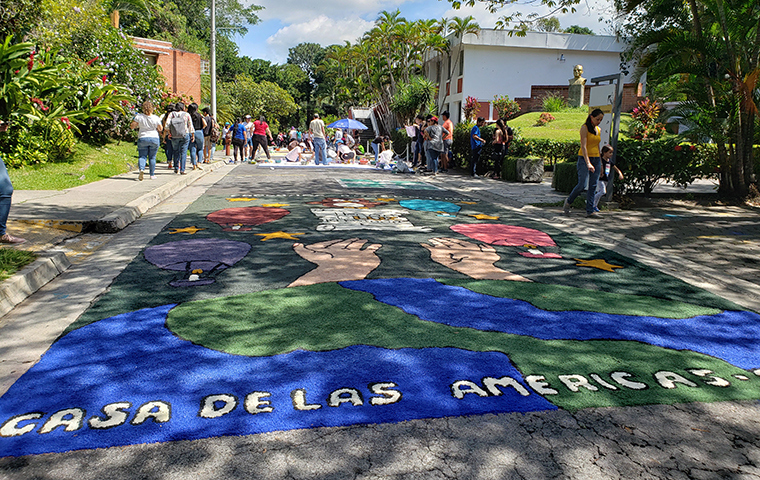 Every Nov. 16, UCA students create mosaics of dyed salt, called alfombra, to honor the memory of the eight victims of the massacre. 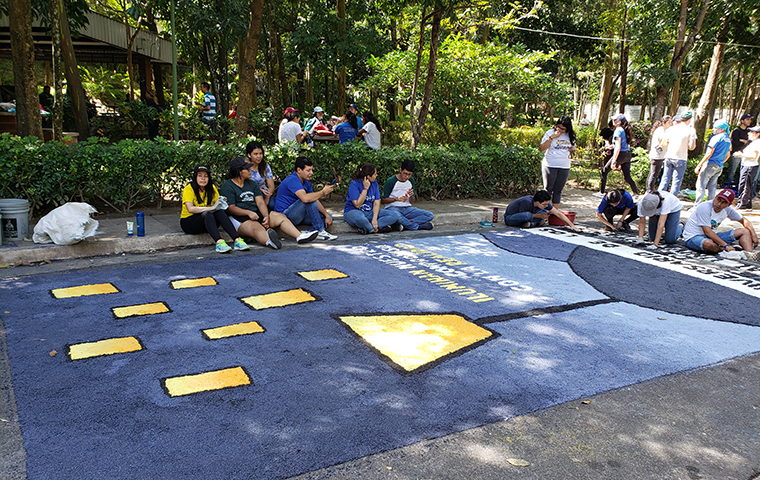 This mosaic, depicting a large yellow lantern leading eight smaller ones, illustrated “Llenan de luz la historia,”  or, “They fill history with light,” this year's theme of the anniversary of the tragedy at UCA. 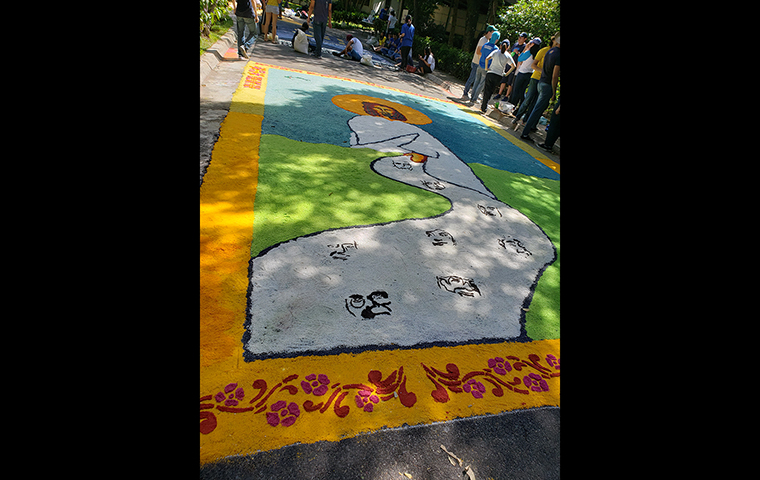 A design in dyed salt that incorporates the faces of the eight victims. 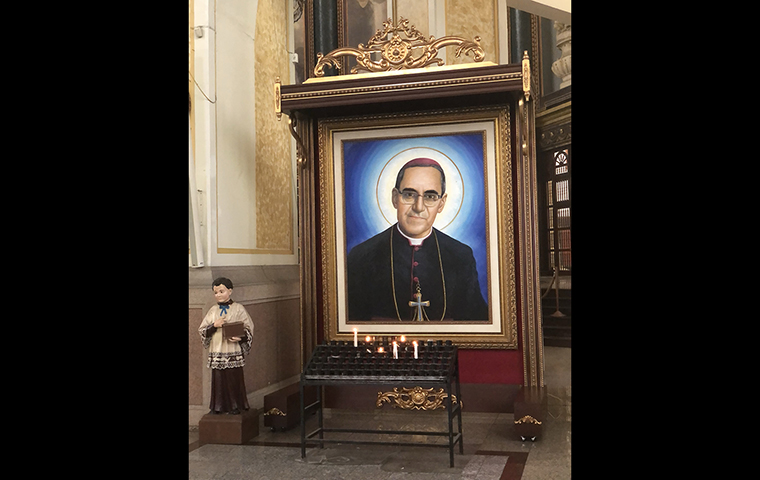 A portrait of slain Archbishop Oscar Romero hangs in the Metropolitan Cathedral of San Salvador, where he is buried.

When he arrived at Universidad Centroamericana (UCA) El Salvador earlier this month to commemorate the November 1989 murders of six Jesuits and two civilians, Santa Clara University’s Paul Schutz was struck by what he saw.

“The entire UCA campus,” recalls the assistant professor of religious studies, “testifies to the martyrs’ legacy.”

Together with Santa Clara’s interim provost Lisa Kloppenberg, Ray Plaza, director of the Office for Diversity and Inclusion, and senior assistant dean Kathleen Schneider, Schutz was part of a group of SCU representatives who traveled to UCA on behalf of SCU President Kevin O’Brien, S.J. (Read Fr. O’Brien's statement on 30th Anniversary), to mark the 30th anniversary of the massacre.

The atrocity had unfolded in the pre-dawn hours of Nov. 16, 1989, at the Jesuit residence on campus. The Salvadoran army—many trained and funded by the U.S.—had long considered Catholic and Christian clergy to be aligned with the left-wing insurgents the soldiers had battled since 1979, when the country plunged into civil war. The Jesuits’ efforts to negotiate an end to the conflict had made them targets.

As retribution, an elite army unit descended on the Jesuits’ home, where they ordered five of the priests to the back yard, commanding them to lie face down before shooting each in the head. A sixth Jesuit was killed inside, as well as the priests' housekeeper and her teenage daughter.

Murders did not stop work of Jesuits

But instead of silencing the Jesuits’ voices, or stopping their social reform work, the massacre drew international attention that ultimately undermined the army’s power and reputation, leading to a peace accord in 1992.

Today, says Schutz, UCA’s Romero Center contains a museum honoring the victims, while streets and signs on campus bear their names. On the site of the Jesuits’ executions, a rose garden flourishes, and for Schutz the blooms represent the sacramental cycle of death and resurrection, the cornerstone of the Christian faith.

“Indeed,” he notes, “Jesus, the Salvadoran people, and the martyrs themselves all die and rise in El Salvador each day.”

And, as they do every year on the morning of Nov. 16, UCA student groups created a series of alfombras, massive mosaics of dyed salt that carpet different campus walkways. One mosaic, depicting a large yellow lantern leading eight smaller ones, illustrated the theme of this year's anniversary, Llenan de luz la historia, or, “They fill history with light.”

By nightfall, in memory of the martyrs, the campus community walked in a peaceful procession right over the mosaics, disrupting their shapes and forms—a sign that nothing lasts forever.

During their visit, the SCU contingent also spoke with many of those who had lived through the years of carnage, including the March 1980 assassination of Archbishop Oscar Romero, who was shot while saying a private mass; the December 1980 rapes and murders of three nuns and a lay worker, and the Jesuit murders nine years later.

In addition, the SCU group met 80-year-old Jon Sobrino, S.J., a groundbreaking liberation theologian who had been based at UCA with his fellow Jesuits, but had been out of the country when the tragedy occurred. Despite that, the Salvadoran government stayed on his trail; Sobrino was given refuge at Santa Clara University by then-SCU President Paul Locatelli, S.J.

Yet the war’s end in 1992 did not stop the struggles for reconciliation, says Schneider.

“There is still a desire for the truth, to find out what happened to the many who were killed and the many more who simply disappeared,” she says.

The young UCA students, Schneider adds, told the SCU team that the trauma of the war years wasn’t limited to their parents’ experiences; it still impacts their lives and futures.

“We learned a tremendous amount about unjust immigration policies, threatening climate change, and the lack of basic resources and opportunities in El Salvador,” says Kloppenberg.

“But we were overwhelmed by the beauty of the country and the people, their hope in oppressive conditions, and the legacy of all those who suffered here in the fight for justice, human rights, and peace.”

A spirit of hope

Even as social and political turmoil continues there, the SCU representatives say they returned from El Salvador more informed and renewed with a spirit of hope  to live more fully in the martyrs’ legacy.

For Plaza, that means a sense of “gratitude and humility in having had the opportunity to learn and walk in the footsteps of these martyrs.

“It definitely provides a more important context to the eight crosses in front of the Mission Church,” says Plaza.

Schneider sees an opening for SCU students’ projects to interact with programs in El Salvador in ways that help residents there improve their quality of life and protect their natural resources.

As for Schutz, the experience enriched and rekindled his commitment to ensuring that his work as a teacher and scholar does justice by “deconstructing structures of oppression,” such as white supremacy, racism and sexism.

“People are suffering unthinkable hardships every day,” says the religious studies expert. “If the martyrs teach us anything, it’s that silence preserves the violence of a status quo that can be overcome, if only we have the courage to speak and act—to give our lives for a greater good, as they did 30 years ago.”