Andrea Hoff dug into the SCU Artifacts collection looking for history. Instead, she found 32 ounces of pure gold.

The general rule for researching artifacts in a special collection, SCU archivist Andrea Hoff says, is that the more interesting an item sounds, the less interesting it probably is. The opposite is true, too: The more mundane the item, the better the story behind it likely is.

So when the Archives Processing & Exhibits Assistant opened an unassuming cardboard oyster box from a previously unprocessed portion of the SCU Artifacts collection in August 2018, she should’ve realized she’d hit the jackpot. Inside the dusty box were dozens of gravel-sized gold nuggets.

“I thought for sure it was fake because it doesn’t look like real gold,” Hoff says. “Then again, I don’t know what raw, real gold actually looks like.”

Hoff never met Fr. Spearman, who died in 1977, but she’s come to know him well. Since joining Santa Clara University Archives and Special Collections last year, Hoff has spent much of her time processing the 71-box collection, which featured many contributions by the former Santa Clara University historian and priest who ran the de Saisset Museum.

Organizing a collection like this is more than just writing down the name of an item and checking a box. Hoff has to research each piece, then write a narrative description that will eventually end up in the Online Archive of California. To do this, she often has to dissect accompanying documentation and, perhaps more importantly, get to know how the collector thinks.

“I always joke that I’m Fr. Spearman’s secretary. Basically organizing his stuff, even though he’s been dead for 40 years,” Hoff says. “That’s how it works. When you go through somebody’s legacy that they’ve left behind, you’re going to get to know them.”

And Spearman was a character, to say the least. A maverick priest and an irrepressible collector of all things historical (and perhaps a few pieces of lesser significance).

In the collection, Hoff found a letter from Fr. Spearman that offered some insight into the acquisition. In 1964, Fr. Spearman met Peter L. Rapkoch of Los Gatos, who wanted to donate his collection of gold nuggets—described as 32 to 35 total ounces of pure gold, the largest nugget weighing 4.5 ounces—to the de Saisset collection, which at the time was the de facto repository for the SCU mineralogy collection.

The gold was from the Placer Mine on the border of California and Oregon, about 40 miles east of Medford, Ore. Spearman viewed this as a truly unique acquisition.

In a request for a contract to finalize the acquisition, Spearman explained that the gold would be kept in a locked safe, except for special occasions when it would be displayed in pans “lined with green velvet to show the pink gold nuggets.” And Spearman took the security of the gold quite seriously, ensuring an armed security guard would be present for all showings. The idea for armed guards came from Loyola University, which had its first folio of Shakespeare protected by two armed guards when it was displayed.

So why is this gold from Oregon in a Santa Clara University archive? The connection to SCU is tenuous. Rapkoch is an alum, having graduated with a B.A. in law in 1951, but why Gold? Hoff isn’t exactly sure. At best, the item represents the Gold Rush and westward expansion, but mostly, it was reflective of Spearman’s personal taste.

Hoff’s personal theory is a bit more fun, and goes back to Fr. Spearman’s father.

“His dad wrote all of these Westerns and he made it big when he published Whispering Smith which they made it into eight movies and then it was a television series in the early 1960s,” Hoff says. “He grew up with a father who was fascinated by the American West, especially railroads. So anything relating to that—the Gold Rush, cowboys, Native Americans—Fr. Spearman loved it.”

It’s not unusual for a collection to mirror the interests of the curator, Hoff says. Each repository has parameters for the types of materials it acquires or keeps—and this has become a more deliberate process as the field has grown—but personal taste always creeps in.

“As much as we like to think we’re super neutral and we don’t prefer anything or anyone, that’s not really true. It can’t be, because we’re people,” Hoff says. “It’s definitely not true in his case.”

There are no plans to display the gold yet—or to hire armed guards for security—but that could change. For now, Hoff is still working her way through the large collection that will ultimately span hundreds of items.

“Everybody has different collecting tendencies,” Hoff says. “Some have just one box and some can’t quit it.” Fr. Spearman, it seems, was not a quitter. 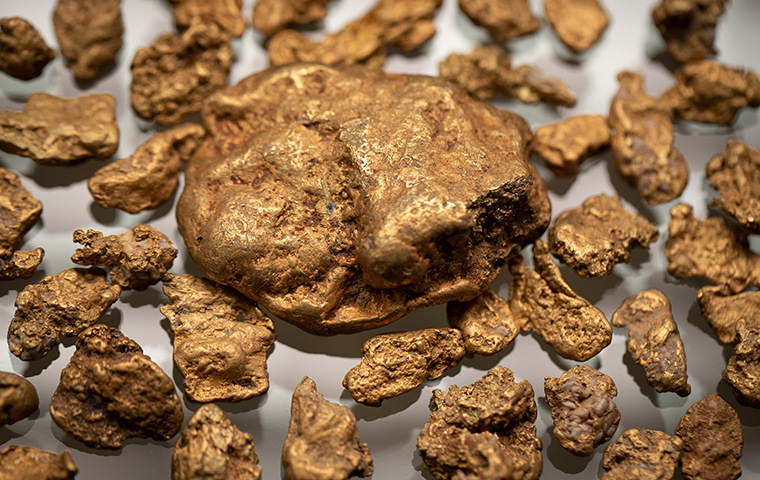