Santa Clara faculty, staff, and a student among those honored for their work on behalf of African Americans.

Four Santa Clara faculty and staff were honored for their work on behalf of African Americans.

Among those honored was SCU Child Studies Associate Professor Brett Solomon, for her work to lift up students of color from underserved communities. In addition to her research into the underlying biases behind the school-to-prison pipeline, she is the director of Future Teachers Project (FTP) which recruits, supports, and mentors students of color pursuing teaching careers in urban and underserved schools. 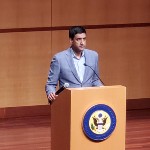 Ethnic Studies Associate Professor Anthony Hazard was honored for his research and teaching on the concept of “race.” His first book, Postwar Anti-racism: The U.S., Unesco and "Race," 1945-1968 (2012) explored the discourse and practice of anti-racism in the first two decades following World War II, including how scientific and cultural discourses of race persisted at the dawn of contemporary globalization.

Jesuit School of Theology Director of Finance and Administration Tanisha Sparks was honored for her work at JST as well as her other life’s passion: 17 years as an ordained Baptist minister, especially in youth and young-adult ministry. Sparks—who received her doctorate in Biblical interpretation and proclamation from the Candler School of Theology at Emory University last year— was invited by the student organization Igwebuike to preach Feb. 9 at SCU’s Mission Church, in celebration of the cultural heritage of the SCU Black community. She received awards for Outstanding Senior Sermon and Outstanding Ministry in the Black Church from the American Baptist Seminary of the West.

Theatre and Dance Professor Aldo Billingslea was among those honored as part of his membership in 100 Black Men of Silicon Valley. The nationwide group, started in the civil rights era, brings together professional African American men who invest their time and talent to improve the educational, economic and social status of African Americans across the nation. The Silicon Valley chapter serves hundreds of young people annually. 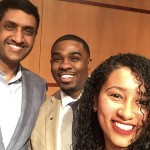 Senior political science major Helen Kassa helped accept an honor as a board member at the African American Community Service Agency (AACSA) one of the only African American cultural centers in the Silicon Valley. AACSA serves over 25,000 people annually through five pillars: education, health & wellness, economic development, social services and a new family resource center. Kassa has been an active volunteer with the agency for over seven years, serving on the board for the last two, in roles including project management, student volunteer recruitment and retention, fundraising and budget management.