The Mystery of Motile Cilia

These whip-like organelles help protect humans from disorders like hydrocephaly and epilepsy, but scientists are puzzled by their structure. Through an NIH-funded research project, Brian Bayless hopes to shed light on the “unique case” of motile cilia.

These whip-like organelles help protect humans from disorders like hydrocephaly and epilepsy, but scientists are puzzled by their structure. Through an NIH-funded research project, Brian Bayless and his student researchers hope to shed light on the “unique case” of motile cilia.

When Brian Bayless looks at motile cilia, he sees the arms of a swimmer. The tiny hair-like appendages that extend out from cell membranes inside the human body rhythmically whip, like a freestyle stroke, pumping extracellular fluid past cells and to organs that need it.

“When you’re swimming, you pull the water behind you and then have a recovery stroke to minimize drag and bring your arm back in position to pull the water again,” the assistant professor of biology says. “That's exactly what motile cilia are doing.”

“Ciliary microtubules don't adhere to any of the normal properties of microtubules,” Bayless says. “From a cell biology perspective, it's a unique case.”

Last summer, Bayless was awarded a $407,661 grant from the National Institutes of Health to support ongoing research aimed at better understanding how motile cilia structure affects its function.

In addition to supplies, the grant pays for the salaries of student researchers and research technicians. Working alongside Bayless in SCU’s new Sobrato Campus for Discovery and Innovation, students get experience in both cellular and molecular biology, using CRISPR technology to manipulate DNA to analyze how certain proteins affect the behavior of motile cilia.

For example, if scientists don't know what function a protein serves in motile cilia, they’ll remove it to see what happens. Is the protein essential? Can the organism live without it and if so, how does the organism’s behavior change?

This is the type of research that gets Bayless excited. As a grad student, he originally wanted to study cancer research but after learning how much we don’t know about cells, he switched his focus to cell biology.

Targeted cancer research is important, Bayless says, but better understanding how cells function offers another path to major breakthroughs. For example, the most used chemotherapy drug, Taxol, disrupts cell division by stabilizing microtubules. Improvements in our understanding of how the cell works allowed for the development of Taxol, and many other breakthroughs, to happen.

Fiona Law ’21, who worked in Bayless’s lab for two years, says the research allows students to make meaningful discoveries and learn about independence, even at the undergraduate level. They’re not just performing cookie-cutter experiments where they know the end results. These are curiosity-driven projects where students have the autonomy to learn on a deeper level.

“I felt with the spontaneity and unpredictability of our research, I had the flexibility to try different things. I could look at an experiment and think how I could change it and switch gears to solve the problem on our own.”

“I felt with the spontaneity and unpredictability of our research, I had the flexibility to try different things,” Law says. “I could look at an experiment and think how I could change it and switch gears to solve the problem on our own. Also, knowing our research could eventually help people affected by multiple diseases, was fulfilling.”

While the scientific breakthroughs are meaningful, the focus of the research in Bayless’s lab is on learning. He says students often come in not knowing how to use a pipette properly and are given the time and space to make mistakes. If a project didn’t go as expected, Bayless works with students in order to learn from the experience, and improve.

Law, who interned in an industry lab during her time at SCU, says professional labs are often driven by deadlines, which can be stressful for interns. Since money is on the line and so many people are involved, you can feel like you’re letting someone down if you make a mistake.

That wasn’t the case working with Bayless. Teams are smaller and the pace is slower, so students become leaders of their own projects. Law found herself mentoring other students who were new to the program, which helped her better understand the process herself.

After graduating from Santa Clara University in 2021, Law started her Ph.D. in Biology at the University of California, Irvine in fall 2021. Her emphasis is in cancer biology and she works in the university’s Cellular and Molecular Biosciences (CMB) program.

“We hear about research a lot, but we don’t necessarily know what research entails,” Law says. “Dr. Bayless helped me figure out what kind of work I could be expected to do, and understand research. Working in the lab I gained a lot of autonomy and learned what questions I needed to be asking so I could decide what types of experiments I needed to run related to my project.” 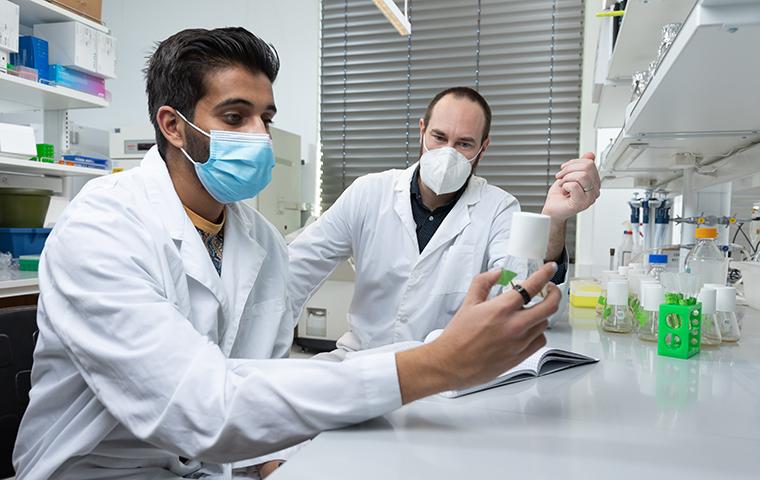