SANTA CLARA, Calif., June 11, 2016 - The building blocks for lifelong growth are as simple as ABC -- attentiveness, bravery, and compassion -- the CEO of the world’s largest relief organization told SCU’s graduating class of 2016.

Speaker Carolyn Y. Woo is the president and CEO of Catholic Relief Services (CRS), and one of the most prominent women in the Catholic Church in the United States. She is a former business school dean at University of Notre Dame and received her bachelor’s, master’s, and doctoral degrees from Purdue University in Indiana. 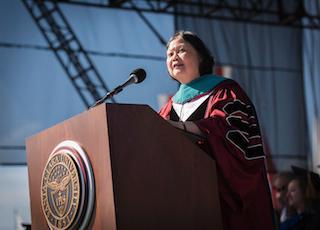 She addressed the graduating class at a ceremony that started at 8:30 a.m. in Buck Shaw Field in Stevens Stadium. Throughout her speech, Woo stressed the incomparable value of attentive relationships with people we encounter in our daily lives and compassion for those we don’t yet know. 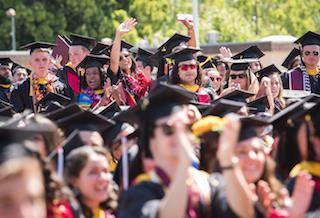 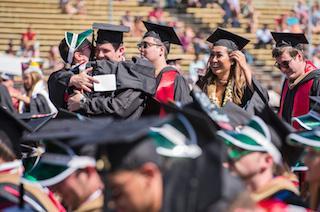 “Interactions with people - those are holy grounds,” she said. “And encounters are sacred. Our time with each other and our interactions is the birthplace of friendships, of understanding, of love, of loyalty and intimacy.” 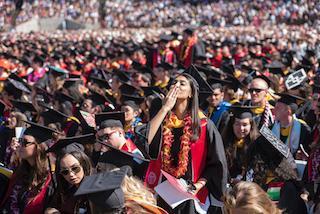 She stressed that students who are “tethered” to electronic devices often miss out on such impactful and life affecting encounters, even with their closest loved ones. Asking “What have you missed?” Woo said a grandparent may say she’s fine after a cancer treatment, but “did you pick up on the frailty, the courage, and the loneliness of that simple statement within ‘dear, I’m fine’?”

She added that it takes compassion to look at suffering in the world, “and not deny it -- to not be so overwhelmed that you deny the suffering of others.”  She quoted theologian Karl Barth who said “In our journey of faith, it is not enough to be with the other, we have to be for the other.”

Santa Clara University’s undergraduate Class of 2016 comprises nearly 1,260 students, ranging in age from 20 to 57 with 49 percent women and 51 percent men. 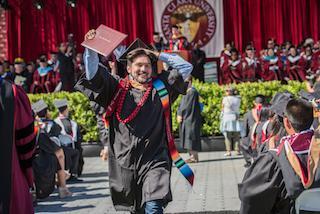 Valedictorian Gus Hardy, a political science and religious studies double major and Catholic studies minor, spoke movingly about overcoming obstacles including making it to Santa Clara University from a high school for kids with autism, and thriving beyond all expectations. “My heart was stirred by all the opportunities the university offered—retreats, immersions, chances at leadership—all of the ways that I could do what I loved,” he said. 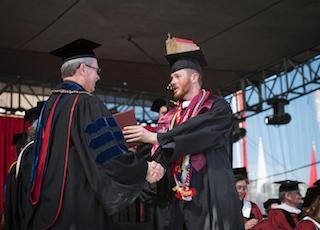 Stirring the crowd to cheers and a standing ovation, he asked his fellow graduates to join him in saying “goodbye” three times to Santa Clara, “to this university that we love and these years where we became men and women for others.”

During the commencement, Dr. Woo received an honorary degree of Doctorate of Public Service for her worldwide service. Honorary degrees also were conferred on Chuck Geschke, co-founder of Adobe Systems, and his wife, Nan, for their philanthropic work in Catholic education. Michael E. Kennedy, S.J., the executive director and founder of the Jesuit Restorative Justice Initiative, received an honorary degree for his lifelong commitment to people at the margins, most recently to incarcerated young people.

A video containing highlights of the address and commencement festivities is available here.