To be eligible for nomination, a student-athlete must be at least ten (10) years removed from his or her academic cohort's final year of enrollment at Santa Clara University and the student must have graduated from the University, though not necessarily in the same year as his or her cohort. Nominators may appeal to the Committee to make an exception to this rule in the case of extreme or unforeseen circumstances impacting graduation. A former student-athlete nominee must have been a member of a recognized varsity sport and must have participated in a minimum of two (2) seasons of intercollegiate competition. The credentials of a former student-athlete nominee must include noteworthy athletic achievement, as determined by the Committee. A nominee other than a former student-athlete may be selected to the Hall of Fame if they are recognized by the Committee to have made significant contributions to the Santa Clara Athletic Department. A nominee's character and ethical standing also will be evaluated by the Committee, as any nominee’s activities after enrollment at Santa Clara should be consistent with the purpose and values of the University. Individuals both living and deceased are eligible for selection. 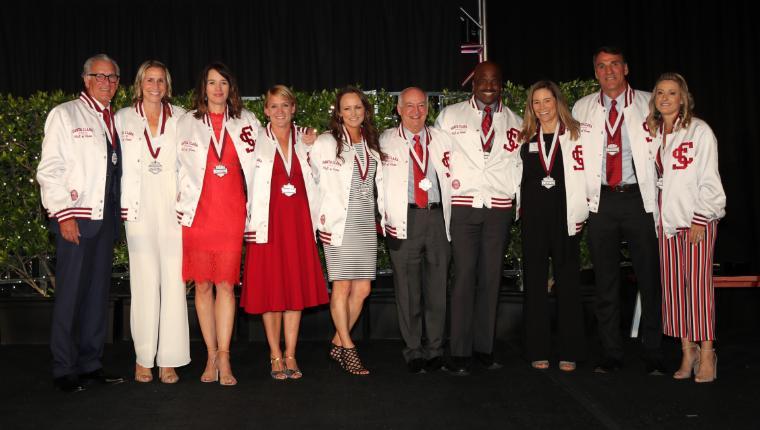 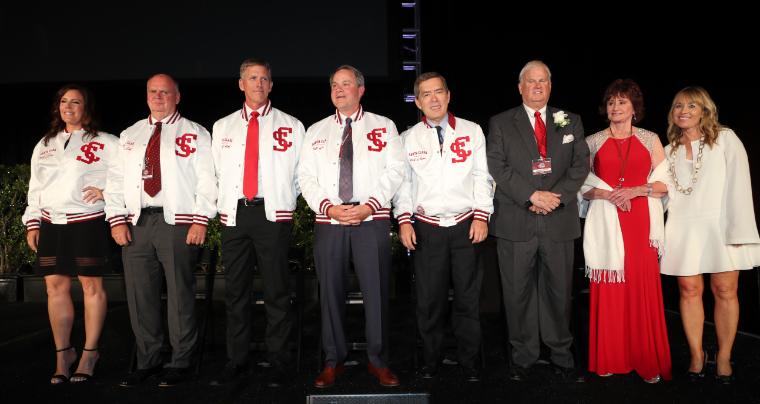 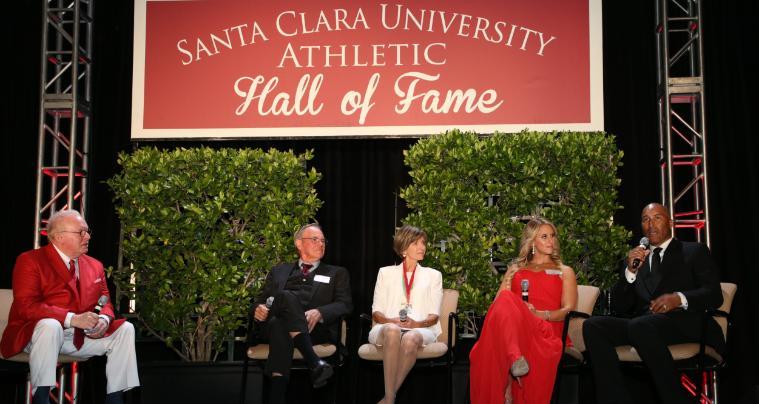 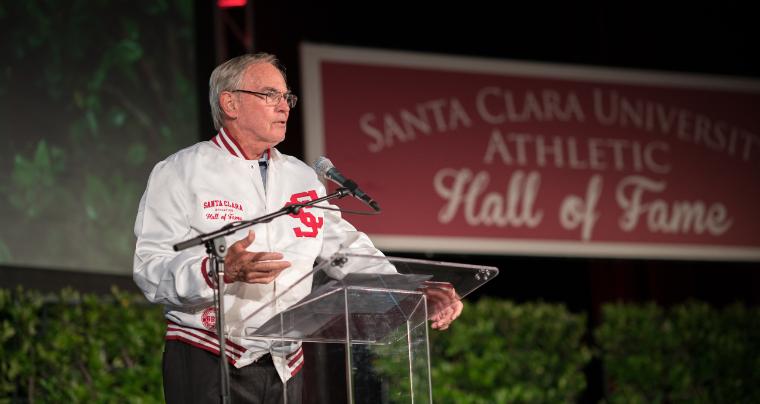 Coach Dick Davey at the 2017 Red and White Ceremony 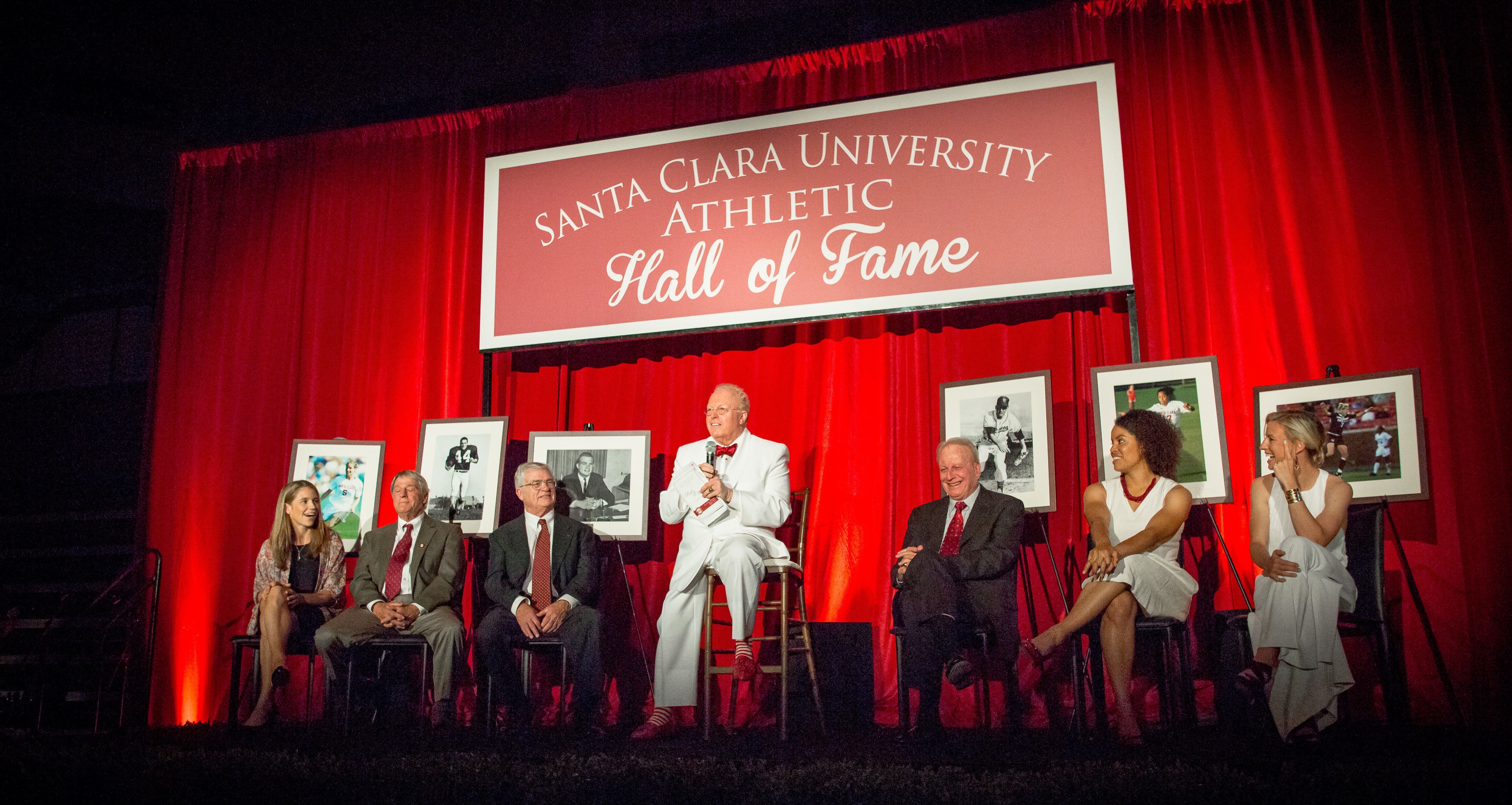 The Committee shall accept nominations for selection from the community at large, including nominations from members of the Committee. In order to be nominated, a former student-athlete must:

A nominee other than a former student-athlete may be selected if they have made a significant contribution to the athletic department. Their character and ethical standing will also be evaluated.

To nominate a candidate, please send an email to Bob Decarolis at rdecarolis@scu.edu with the following information:

There shall be an annual open, public announcement inviting nominations to be made.

Dr. Baumgartner is Santa Clara’s current Director of Athletics, and has 15 years of experience as a college administrator and 17 years as either a coach or a student-athlete in collegiate sports programs. In her tenure as Director of Athletics at Santa Clara, she has overseen the hires of accomplished basketball coaches for both the mens and womens basketball teams in Herb Sendek and Bill Carr, has spearheaded the upgrade of the Leavey Center, and has increased sports budgets and department staffing. Prior to Santa Clara she spent 17 years at Oregon as both an administrator and head women’s golf coach and four years at Syracuse as the deputy athletic director.

Paul Neilan ‘70 is the Senior Associate Director of the Alumni Office and has worked in the Alumni office at Santa Clara since 1978. He is responsible for the annual Alumni Association Graduation Picnic, Gianera Society class reunions, and assists with other association events and programs as needed. In addition, his 40 year career has allowed him to interact with countless alumni and gain unique experience and understanding of Santa Clara’s values and what it means to be a Bronco. These qualities have made him an invaluable asset in the Alumni Office as well as on the Hall of Fame Committee. In light of his efforts, he was honored in 1992 by the University for his years of selfless service managing an extraordinary number of functions that serve thousands. 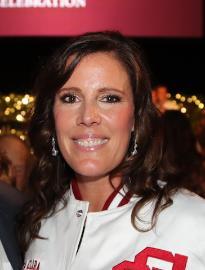 Lisa Swendsen (formerly Sacco) ‘98 played basketball at Santa Clara from 1994-98. During her time with the Broncos, she was recognized as the WCC Player of the Year (1997-98), WCC Tournament MVP (1997-98) and named First Team All-WCC twice (1996-97, 1997-98). As a member of the 1,000 point club, Swendsen ranks 21st all-time in points, fifth in assists, third in steals, and seventh in 3-point shooting percentage. For her accomplishments, she was inducted into the Santa Clara Athletic Hall of Fame in 2018. Swendsen now works for the university as Assistant Director for University Protocol and Events 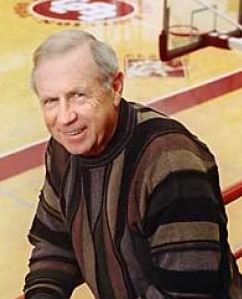 Carroll Williams served as the athletic director at Santa Clara University until 2000. Williams guided athletic programs at Santa Clara University to continued levels of national prominence. His final year as athletic director was highlighted by a second consecutive year of NCAA semifinal appearances by the Bronco men's and women's soccer teams. In eight years as athletic director, SCU had 19 West Coast Conference championships in seven sports, and 23 postseason tournaments. Prior to that, Williams was the SCU basketball head coach. In his 22 years as head coach of the SCU men's basketball team, Williams compiled a 344-274 career record. For his contributions, Williams was inducted into the Santa Clara Athletic Hall of Fame in 1994, and was named the 2016 Bronco Legend by the SCU Alumni Association.

The Committee shall be appointed by the Santa Clara University Director of Athletics and the Executive Director of the Bronco Bench, who shall serve as Co-Chairpersons of the Committee. The Committee shall consist of five (5) additional members, who shall represent a broad spectrum of the campus community, including, but not limited to, coaches, alumni, University staff, and current members of the Hall of Fame. The total composition of the Committee shall be seven (7) members. Members would meet a minimum of two (2) times per year to offer and discuss nominees to make final induction decisions. The Co-Chairpersons of the committee will be responsible for calling meetings, providing documentation and managing all correspondence. The Hall of Fame Committee is self-governing and operates independently and without influence of other University committees. The autonomy of the Committee is intended to promote a lasting and meaningful legacy for the Hall of Fame.