By combining studies in Mathematics and Music, Michael Noonan ’21 found the unique intersections that have allowed him to thrive.

By combining studies in Mathematics and Music, Michael Noonan ’21 found the unique intersections that have allowed him to thrive. 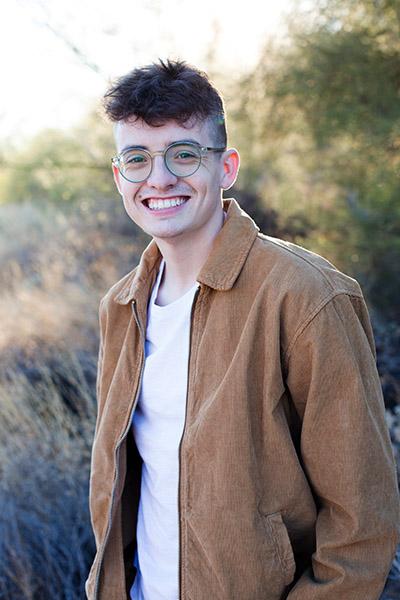 Throughout his time at Santa Clara University, Michael Noonan ’21 ended up studying two very different subjects. A Mathematics and Music double major, Noonan says he had a unique experience that taught him many valuable lessons about life. “I chose music because it was the thing I cared the most about, and I chose math because it was the thing I was best at,” he says. Little did he know his majors would prove to have many intersections that would allow him to learn and grow as an artist and as a person.

Noonan chose to come to Santa Clara because of the opportunities in the area and the interactions he had with people while visiting the campus. Even now, the people he has met, and particularly the professors he has formed relationships with, have continued to be the highlight of his experience. “Now, after four years, I think the best thing about Santa Clara is the teachers that I’ve had,” he says. “Both in the Music and Math departments, and in some of the core classes I’ve taken in other departments.” Even after a particular class had ended, Noonan still sought out interactions with his professors and continued to learn from them. “I always felt like I was listened to and supported, and I felt like I could always pick up something new with every interaction.”

While studying both Mathematics and Music, Noonan found some interesting connections between the two different subjects. For a long time, he never viewed math as a creative or artistic discipline. This changed, however, when he started taking more upper division classes. “The more classes I took, the more I was seeing the art behind it,” Noonan explains. “The more that I started caring about my music studies and what an artist was, the more that I found beauty and color within what I was doing with math. I started figuring out more elegant, interesting ways of expressing myself in my math writing.”

As his final Music project before graduation, Noonan is preparing a senior piano recital. The performance will include a unique array of music, including some pieces from composers that have never been played at Santa Clara. Practicing has been difficult, unfortunately, not only because of the COVID-19 pandemic, but also because Noonan has been recovering from a sprained wrist. But his time at Santa Clara has taught him how to persevere through challenging circumstances. Thanks to the skills he has learned in his math major, his ability to solve problems has improved greatly. “I used to give up easily on a problem if it wasn’t going the right way, but now, I’m willing to constantly approach things at different angles and through different paths until I figure out a solution,” Noonan says. Even amidst the challenges, he continues to practice his music and prepare for his recital this month.

After graduation, Noonan is returning to his high school as a math teacher. Additionally, he’ll be applying to graduate schools for musicology. “My plan is to one day be a professor at a university,” he says. Over the past four years, Noonan has grown in several ways and learned many valuable lessons. “I’ve been forced to grow more confident in my abilities,” he says. “Some of the classes that have been a real challenge have forced me to accept my limitations and understand that there are things I’m not incredible at. But I’ve also learned to persevere and make it through difficult situations.” Noonan hopes to carry these lessons with him into his future career and throughout the rest of his life.