Taking Team Beetle From the Field to the Lab

Senior Paola Valle ‘20 (Neuroscience) came to Santa Clara University with a passion for handling animals, and an interest in their behavior and neural networks. During her Animal Physiology class, Elizabeth Dahlhoff (Biology) offered Valle an opportunity to combine these interests through the REAL program. The opportunity was to join “Team Beetle” in tracking populations of Willow Beetles in the Eastern Sierras, contributing to an ongoing research project happening at SCU. Valle may not have known exactly what her REAL experience would look like, but says now, “I couldn’t have ever imagined how cool this project would end up being—I’m so glad I’m involved.” 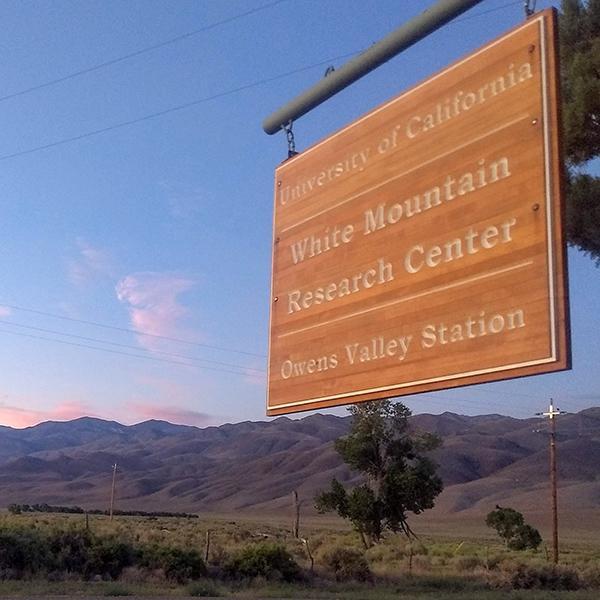 Team Beetle packed their bags for Bishop, CA and struck out ready to spend the summer conducting research. With their homebase at a research station outside of Bishop, the team hiked between four and 20 miles a day, collecting data about the behavior of willow beetles in their natural habitat. After that, they would retreat back to the station’s lab with beetles they collected for controlled experiments on their mating habits. Two different populations of beetles in the northern and southern Sierras were tested to see if they would mate with members of the other population, how many eggs were laid, and the fitness of the offspring. When they weren’t out in the field, Team Beetle could be found hanging out and cooking in the research station’s kitchen, floating in the Owens River that ran behind their homebase, and soaking in natural hot springs. While the project included long hours in the lab and learning at a rapid pace, Valle described it as “very intensive, but really rewarding.”

Upon returning to Santa Clara, Valle traded her hiking boots in for a lab coat. “I’m in the process of extracting the DNA from the adults in the mating experiments, and the DNA of the larvae, totalling 4,000 DNA extractions,” Valle says. Once this is done, Team Beetle will be able to gain insight into genetic information, leading to biochemical reactions that may be responsible for the trends in mating observed over the summer. 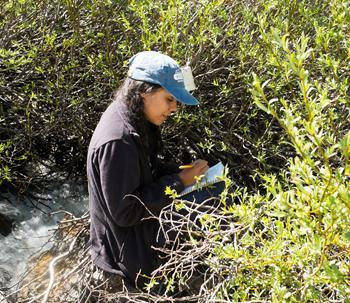 The metabolic genes measured by Team Beetle could also provide insight into the effects of climate change on the beetle populations. As temperatures rise, the beetles look for new homes higher in elevation, which causes stress since they are used to having more oxygen available. This stress changes the way the metabolism of these organisms work, which will in turn affect the genes Team Beetle is studying in the lab. This data can be compared to the 20+ years of data collected from SCU students in the past, allowing researchers to spot changes in these genes over time.

Valle was excited to combine what she had learned from her Neuroscience major and Sustainability minor, making connections across disciplines. “I love it when things get integrated like that,” she said of applying her knowledge of genetics, biochemistry, neuroscience, animal behavior, lab skills, and the environment.

Reminiscing about the impact this project has had so far, Valle remarks, “I thought I was just going to be a beetle nanny for a summer, but it turned into this huge project. The experiment was meant to be a pilot experiment, but it turned into something much larger.” Valle is now the first author on a paper Team Beetle is working on, and will be going back to the research station again this summer to continue the research. She also had the chance to present with her team at the Society for Integrative and Comparative Biology. “It allowed me to go to a lot of talks which helped me figure out what I want to do,” Valle said.

“This opportunity just kind of fell into my lap, and it’s turned into so much. I feel really lucky.” Valle wants to continue studying animal behavior, preferably as it involves field research. Her interest in observing animals in the field comes from a love of learning about the animals themselves, rather than simply studying animals as a proxy for understanding of human behavior. “If you take the animal perspective, we can learn not only more about our own experiences, but about the experiences of other things living in the same space we live in. We’ve got to take care of it all anyways.”

About the REAL Program

The College of Arts and Sciences developed the REAL Program to allow students to discover their interests, gain a rich understanding of a particular field, discern their career goals, and explore future employment fields. We believe financial means should not determine whether or not a student can participate in internships, research, projects or creative works opportunities. Committed to providing paid experiential learning opportunities for students, the REAL Program provides stipends up to $5,000 for undergraduate opportunities lasting up to 10 weeks over the summer. Since inception, the program has distributed nearly $1.3 million to more than 300 students.