Over the past year, in a collaboration between SCU’s Center for the Arts and Humanities and Filoli Gardens, landscape artist and architect W. Gary Smith engaged in a variety of activities, including a campus lecture, co-teaching a new two quarter course, “Site Specific Art,” and the preparation of an art installation, pop-up art project, and dance performance.

In his January campus lecture at SCU’s Nobili Hall, the longtime professor and respected artist revealed the eight naturally recurring patterns that can be found in nature—scattered, fractured, mosaic, naturalistic, serpentine, spiral, radial, dendritic—and explained how, from the smallest microbes and particles to the galaxy that contains us all, these patterns create the beauty we see in nature.

Smith’s path to full-time artist began with a career in higher education, including appointments at the University of Delaware, the University of Pennsylvania, and the University of Texas. While he works as an artist, Smith continues to teach and engage with young artists and faculty through residencies like that at SCU. Since September of 2018, Smith devoted the majority of his time on campus to working with students, specifically in his and Ryan Carrington’s (Studio Art) “Site Specific Art” (ARTS 97B) class and in Robin Tremblay-McGaw's (English) first-year Creative Thinking and Writing (CTW) course.

In “Site Specific Art,” Smith, Carrington and the students prepared pieces for a major installation, Nests: Creating Home, at Filoli Gardens. Featured from May to November 2019 at the gardens, the students’ art consists of a variety of different forms, from traditional sculpture to pieces constructed out of natural materials taken from Filoli’s grounds. Smith’s focus on nature and unique artistic mediums expanded many of the art students’ perspectives. During one class, they spent the day using hay to create some of the eight natural recurring patterns that Smith identified in his January lecture and utilizes on a daily basis. 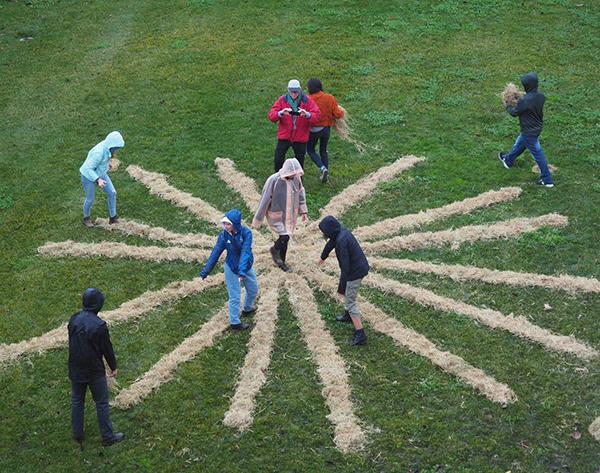 “The only way to describe [the activity] and his art is ephemeral,” commented Jacqui Villareal ‘19 (Studio Art and Communication), a student who was involved. “There was this moment where we completed a drawing, and we admired it as a group in silence and he said, ‘Alright, rake it up. On to the next one,’ and it really hit me then how despite [his art’s] temporary nature, it is still beautiful and worthwhile.”

Similarly, in Tremblay-McGaw's CTW class, Smith again challenged the students with a unique medium—lawn—diving head-first into a discussion of the typical American lawn "as a status symbol.” In their conversation, Smith pointed out that there are over 40 million square miles of lawn in the United States—much of which could be devoted to other things like food production, instead of manufactured and commercialized beauty.

His thoughtful engagement in the course caused students, like Emma B. Samuel ‘22 (English and Philosophy), to rethink original ideals. “When we first started out with a dining table and lawn clippings,” Samuel says, “I was so lost, but as the class went on, I realized so much about my own perception of art and what makes it beautiful.” 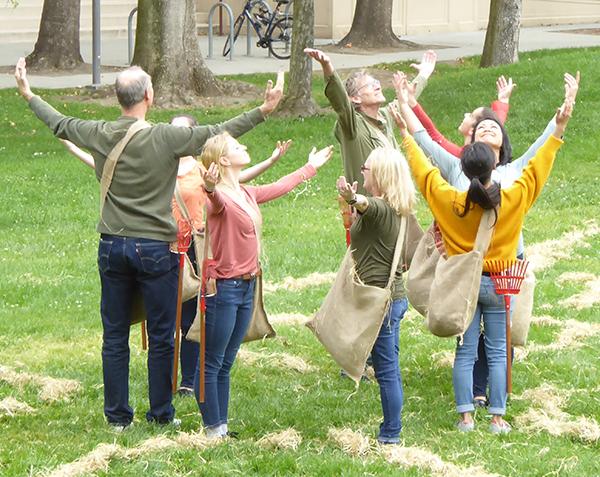 Other activities he facilitated included an informal dance performance Connections: Erasures, in partnership with professor David Popalisky (Theatre and Dance), which featured students, faculty and staff; and a Nest installation, in the spirit of his installation at Filoli, temporarily displayed outside of the Dowd Art and Art History Building, which was composed of branches and twigs collected from SCU’s campus.

Throughout his year at SCU, from art projects to dance exercises, Smith maintained focus on the simple fact that there are only eight patterns in the universe that account for all of the world's beauty. When asked about this reality and its impact on his work, Smith describes these patterns as "very comforting to me as a designer."

Thanks to his 2018-2019 campus engagement, Smith has taught SCU students that "there's always a process" when it comes to all forms of art, relating the lesson that even in more complex projects when students are worried about producing a satisfying final product, "stay with it, but don't control it."