The Department of Music hosted their inaugural Music and Social Justice Festival on January 27-29, 2016 -- a three-day festival comprised of multiple interdisciplinary and collaborative events co-sponsored by the College of Arts and Sciences Salon Series on (in)humanity, the Office for Diversity and Inclusion, and the SCU-Presents Arts for Social Justice Program. 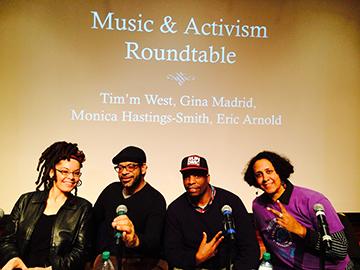 The festival opened with a Music and Activism Roundtable with local artist-activists who have worked in the areas of music, journalism, education, and community development: Oakulture founder Eric Arnold, drummer-activist Monica Hastings-Smith, Mexican hip hop artist Gina Madrid, and special guest of the festival, Tim’m West. Festival Director, Professor Christina Zanfagna, facilitated a discussion among the panelists on how music, and the arts more broadly, can address issues of social inequality, forge interracial alliances, and help to create a more just world. 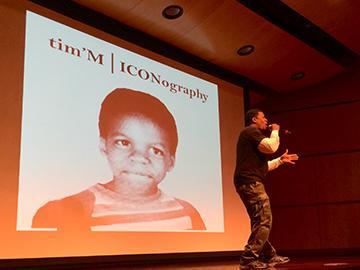 The second day of the festival featured poet, scholar, hip hop MC, and youth activist, Tim’m West. In addition to visiting several classes in the Music Department as well as Claudia McIsaac’s Creative Writing & Social Justice course, West led a film screening and Q&A of Pick Up The Mic: The Revolution of Homohop with students from across campus. The documentary, released exactly a decade ago, profiles the underground “homo hop” scene, which is a burgeoning subgenre of hip hop that includes gay, lesbian, bisexual, and transgender artists. West, as one of the first black and queer-identified hip hop artists to emerge during the early 2000s, then gave a dynamic multimedia presentation entitled, “In Deceptions of Old Glory: Rap as a Critique of Memory, Nostalgia, and Nationality,” in which he performed songs from his six different solo projects and offered counter-narratives to racialized norms of masculinity. Through lecture and performance, West ventured into a cross-pollination of hip hop, blues, and gospel in order to sonically bridge the sometimes sharp generational schisms that dichotomize black vocality.