On the Road Toward Effecting Change

SCU’s Abby Alvarez ’22 and Jasmyn Burdsall ’20 have been named finalists for the prestigious Truman Scholarship and the Knight-Hennessy Scholars Program, significant opportunities in their journey to effect positive change in marginalized communities.

SCU’s Abby Alvarez ’22 and Jasmyn Burdsall ’20 have been named finalists for the prestigious Truman Scholarship and the Knight-Hennessy Scholars Program, significant opportunities in their journey to effect positive change in marginalized communities.

In a time fraught with the stress and uncertainty that accompanies a global pandemic, two Broncos have set themselves on a path to enact positive change. As finalists for two prestigious scholarships, Abby Alvarez ’22, a finalist for the Truman Scholarship, and Jasmyn Brudsall ’20, a finalist for the Knight-Hennessy Scholars program, are striving to employ their talents and passion to serve those most in need of help. 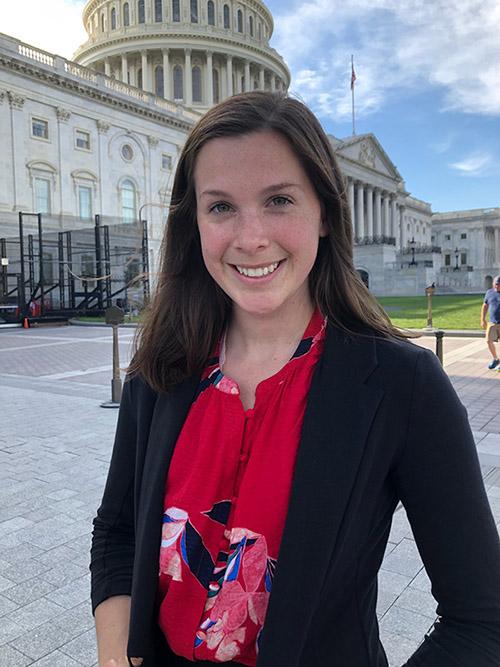 Junior Abby Alvarez ’22 is a political science and Spanish double major with a minor in women’s and gender studies. In the top 2% of her class, she is a passionate advocate for the voiceless and powerless, and has tailored her courseload to make herself a better advocate, ensuring each class—whether a core course or an elective—contributes to her growing skillset and adds fuel to her passion for justice and equity. She hopes to use her career to promote just and equity-centered legislation while working to uplift disability rights in all policy areas, including labor, immigration, education, and violence prevention.

“Abby embodies the very best qualities of Santa Clara’s Jesuit education in her collaborative, purposeful leadership, passion for serving marginalized or voiceless others, and intellectual and ethical development,” wrote Stephen Carroll, Matthew Harrigan, and Naomi Levy in their nomination letter for Alvarez. “She is the epitome of a ‘person for and with others.’”

An active changemaker on campus and in her local community, Alvarez started “Advocacy for Workers on Campus,” a group that mobilizes students on behalf of service workers on Santa Clara’s campus. Her work with this group brought the voices of those affected to the forefront and resulted in a contract that promised living wages for workers. In her hometown, she transformed a small student club, Oregon Student Voice, into a statewide nonprofit organization focused on youth empowerment and education policy reform. Now serving as the president of the group’s board of directors, she oversees strategic planning and continues to encourage students from across the state to be central voices in education policy decision-making.

Alvarez is a two-time participant in the REAL program on campus, working with the Respectability National Leadership Program, and conducting an internship as a Government Affairs Intern with the California Immigrant Policy Center. She plans to continue working to effect positive change throughout her career. As a Truman Scholar, she aims to attend UC Berkeley Law and pursue a career as a policy advocate, eventually working towards holding public office herself as a state senator or assemblymember.

A premier graduate fellowship in the United States for those pursuing careers as public service leaders, the Truman Scholarship provides $30,000 for graduate school and programming to help each recipient be the best public servants possible. The scholarship, which was created in 1977, has been awarded to just three Santa Clara University students: Janet Napolitano ’79 (in 1977), Dierdre M. Kelly ’81 (1979), and Kim P. Olson ’87 (1985).

Alumna Jasmyn Burdsall ’20 was a psychology major with a public health minor while at Santa Clara. She has channeled her passion and leadership towards reducing violence against women and helping women recover from violent assault and trauma. In pursuit of her goal of diagnosing and treating trauma, she was able to connect diverse fields, such as religious studies, public health, psychology, and sociology, through her coursework on campus. As a Knight-Hennessy Scholar, she aims to conduct community-based research that will lead to better, more culturally sensitive diagnostics and treatments for minority and non-Western women who have suffered from trauma and abuse.

While on campus, Burdsall conducted original research with SCU faculty, funded through the REAL program, on post-traumatic stress disorder, including developing a powerful, culturally sensitive diagnostic tool for assessing assault-related PTSD—the first of its type. She also led the development of a mental health app for SCU students, UFEEL, that reduces disparities in mental healthcare access. As a Global Social Benefit Fellow through SCU’s Miller Center for Social Entrepreneurship, she helped design a mental healthcare curriculum for South Sudanese refugees that will be implemented in the camps in Uganda—another first of its kind.

“Those who know Jasmyn on campus know of her passionate commitment to addressing violence against women,” said Levy, director of the Office of Student Fellowships. “She is driven by a moral vision and passion, and has already demonstrated her ability as a change agent. Her intellectual capacity combined with her dedication to serve to assure that she will continue to make an impact wherever she goes.”

Burdsall plans to attend Stanford’s Community Health and Prevention Research program where she will get the training needed to become a leader in the treatment and prevention of violence in minority communities.

Modeled after the Rhodes Scholarship, the Knight-Hennessy Scholars program “cultivates a diverse, multidisciplinary community of emerging leaders from around the world and guides them to collaborate, innovate, and communicate as they prepare to address the complex challenges facing society.” Scholars also receive funding to attend graduate school at Stanford. SCU has had one other Knight-Hennessy Scholar, biology major Hayley Raquer ’16 who was in the program’s inaugural cohort in 2018.

Final interviews for both the Truman Scholarship and the Knight-Hennessy Scholars program will take place the first week of March, with selections announced later this spring.