SANTA CLARA, Calif., March 14, 2019 —Senior environmental studies and psychology major Samantha Bennett has won a Fulbright Scholarship to study in Bangalore, India. She will be researching women’s participation in economic development activities, specifically in the field of clean-energy technology and entrepreneurship.

Bennett’s vision for her Fulbright research grew from her time as a Global Social Benefit Fellow (GSBF) with Santa Clara University’s Miller Center for Social Entrepreneurship. Her initial project began with  an organization called Pollinate Energy, now Pollinate Group, which provides micro financing to Indian women to sell solar lanterns and other clean-energy products to impoverished residents in urban slum areas in India. But problems arose which required the team to change course. They spent their GSBF summer in Uganda and Rwanda instead, conducting research on how All Across Africa, a collection of artisans—many of them women— could scale into new regions and further advance women’s economic empowerment.

Now, with her Fulbright, Bennett  finally will be working with Pollinate Group as well as the Centre for Women Studies at Bangalore University, delving into ways in which the Pollinate Group can further involve women in its business model and advance women in the energy sector. 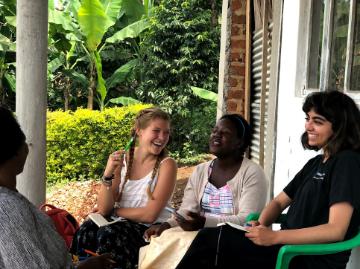 “I am so thrilled to be able to explore my interest in women’s agency and decision-making in the clean-energy sector in India, a country that exemplifies the unrealized potential of women, with only 26 percent of women working in either the formal or informal economy,” says Bennett.

Originally from Phoenix, Bennett has been in Santa Clara University’s Honors Program all four years, and was a Global Fellow in the summer after her sophomore year.  She traveled to Bolivia to conduct research on understanding people’s intentions for seeking recreational greenspace, and whether time spent in greenspace leads to sustainable behaviors. Her research was funded through the Hayes Fellowship.

As an intern  at SCU’s Center for Sustainability and as co-president of the on-campus Food Recovery Network, Bennett has been inspired to tackle the challenge of food waste at SCU by developing an app that alerts students about food that is left over from on-campus events. Bennett and a group of fellow sustainability interns received a $4,000 grant and are working with SCU’s  Frugal Innovation Hub to develop the app, which will be piloted in the spring quarter.

During a semester of Study Abroad, she traveled to Copenhagen, Denmark to study sustainable development, and witnessed firsthand one of the world’s best urban transportation systems. She took classes in environmental psychology, which she said helped her  better understand human behaviors in relation to the natural world.

Bennett is active student leader on campus. In addition to participating in SCU’s Associated Student Government, she has served as an orientation leader, and co-founded SCU Mindfulness, a group that promotes healthy living among SCU’s campus community.

She has been a program coordinator with the Santa Clara Community Action Program, worked on vocational training with teens with disabilities in the Forge Garden; and currently leads the College of Adaptive Arts Program, an arts college for adults with disabilities. An avid theater and dance buff, Bennett  performed in “Legally Blonde, the Musical” last spring, and has taken many classes in dance, voice, and musical theater at SCU. She is inspired by the role that creative arts like theater play in social change and community empowerment.

Bennett hopes to continue working at a grassroots level with social businesses, then obtain a masters or PhD in sustainable international development, resilience systems, or social entrepreneurship. She also hopes to continue exploring the connections that exist between women’s agency (or the ability to make effective choices and transform them into desired outcomes), resilience to climate change, and community-based initiatives.

About the Fulbright Program
The Fulbright Program is the flagship international educational exchange program sponsored by the U.S. government and is designed to increase mutual understanding between the people of the United States and the people of other countries. The primary source of funding for the Fulbright Program is an annual appropriation made by the U.S. Congress to the U.S. Department of State, Bureau of Educational and Cultural Affairs. Participating governments and host institutions, corporations, and foundations in foreign countries and in the United States also provide direct and indirect support. Recipients of Fulbright grants are selected on the basis of academic or professional achievement, as well as demonstrated leadership potential in their fields. The program operates in more than 155 countries worldwide. For further information please visit eca.state.gov/fulbright.

About Santa Clara University
Founded in 1851, Santa Clara University sits in the heart of Silicon Valley—the world’s most innovative and entrepreneurial region. The University’s stunningly landscaped 106-acre campus is home to the historic Mission Santa Clara de Asís. Ranked the No. 1 regional university in the West by U.S. News & World Report, SCU has among the best four-year graduation rates in the nation and is rated by PayScale in the top 1 percent of universities with the highest-paid graduates. SCU has produced elite levels of Fulbright Scholars as well as four Rhodes Scholars. With undergraduate programs in arts and sciences, business, and engineering, and graduate programs in six disciplines, the curriculum blends high-tech innovation with social consciousness grounded in the tradition of Jesuit, Catholic education.  For more information see www.scu.edu.