SANTA CLARA, Calif., June 16, 2018— The qualities that distinguish Santa Clara graduates—compassion, purpose, preparation, and courage—don’t come with a lifetime guarantee. They require daily fortification and commitment to uphold the values that set Broncos apart in work, life, and love.

That was the message of Kirk O. Hanson, the outgoing executive director of Santa Clara University’s acclaimed Markkula Center for Applied Ethics, as he addressed nearly 1,300 members of the Class of 2018 at a ceremony at Buck Shaw Field in Stevens Stadium Saturday morning.

“You will shape your own character and your own strengths every day of your life,” he said. “You will weaken or strengthen your compassion, your purpose, your preparation, your courage, by the decisions you make every day.  Who you are tomorrow depends on what you do today.”

Hanson, who is stepping down after 17 years at the helm of the Ethics Center, said his perspective from different universities has led him to conclude that Santa Clara students are different in four key ways, each of which provide profound advantages:

Hanson led the Ethics Center as it became the largest and most active university-based ethics center in the world. He also holds the John Courtney Murray S.J. University Professorship in Social Ethics at Santa Clara. A graduate of Stanford University and the Stanford Graduate School of Business, he has held graduate fellowships and research appointments at the Yale Divinity School and the Harvard Business School, and received an honorary doctorate in 2013 from the University of Portland. At the ceremony, Santa Clara University awarded him an honorary doctorate in education.

A founding chair of numerous national and international business-ethics organizations, Hanson writes extensively on managing the ethical and public behavior of corporations, including co-editing a four-volume series titled The Accountable Corporation. Since 1973, he has advised over 100 businesses on the design of corporate ethics programs.

He currently serves on the board of directors of the Skoll Community Fund and sits on the advisory board of the Neely Center for Ethical Leadership and Decision Making at the University of Southern California.

Watch a video with highlights of this year's commencement online. 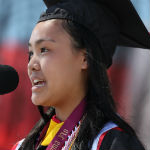 After the degrees were conferred, valedictorian Athena Nguyen ’18, a public health and political science double major, spoke to her peers about internalizing the concept of “accompaniment,” or being with people that one seeks to serve.

“A popular name in the public health field and my personal hero, Paul Farmer, discussed the importance of accompaniment,” she said. Quoting Farmer, she added “To accompany someone is...to be present on a journey with a beginning and an end.”

She also shared how SCU experiences helped her overcome past shame about being different, bullied because of her Vietnamese parents and heritage. “By engaging in cross-cultural dialogue and finding my place among friends and families throughout the world, I have come to realize that my multicultural background is an asset,” she said. 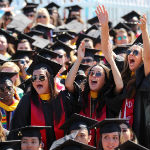 On Friday evening, June 15, the more than 600 students who earned advanced degrees in business, engineering, education and counseling psychology, and pastoral ministries celebrated their commencement during a ceremony at Buck Shaw Field. Throughout the evening, advanced degrees were conferred on students from the Leavey School of Business; the School of Engineering; the School of Education and Counseling Psychology; and the College of Arts and Sciences’ Pastoral Ministries program.