Kreiner’s next venture is focused on discovering and harnessing transformative technologies to address the world’s most challenging problems.

Kreiner, a former life sciences executive and startup founder, has overseen tremendous growth in the programming, impact, and reach of Miller Center, one of three Centers of Distinction at Santa Clara University.

Miller Center now serves more than 150 social entrepreneurs a year – an order of magnitude increase from when he took the helm— through what has become the world-class Global Social Benefit Institute (GSBI®) Accelerator program. Through its proven structured curriculum drawing on Jesuit principles, strong mentorship by Silicon Valley executives, networking, and introductions to financing opportunities, Miller Center helps the entrepreneurs discern pathways to scale the beneficial impact of their work.

More than 1,000 social enterprises have received such accompaniment, collectively impacting the lives of more than 400 million people in 100 countries.

“The number of lives that have been improved, transformed, or saved through Miller Center’s exceptional work under Thane’s leadership is remarkable by any measure,” said Kevin O’Brien, S.J., president of Santa Clara University. “Miller Center’s focus on using social entrepreneurship in service of the most marginalized of this world truly embodies the principles of Jesuit education.”

“We will greatly miss Thane’s energy, vision, and leadership of one of Santa Clara’s ‘crown jewel’ Centers of Distinction,” said Interim Provost Lisa Kloppenberg. “Miller Center under Thane’s guidance has been a source of tremendous pride, amazing progress in combating poverty and social injustice, and a true ambassador of Santa Clara’s most dearly held values.” 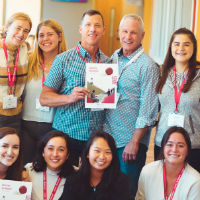 “I am honored and humbled to have walked with so many amazing people on this incredible journey to impact,” said Kreiner. “Santa Clara’s devotion to ending poverty and protecting the planet and its attention to servant leadership has been formative for me in many dimensions and is forever part of my DNA.”

While at Santa Clara, Kreiner authored two books, Composition of Life and A Walk in the Garden.

Prior to joining Santa Clara University, Kreiner was founder, president, and CEO of Second Genome, a microbiome analysis company. He founded and was president and CEO of Presage Biosciences, and was start-up president and CEO of iPierian, a regenerative medicine venture acquired by Bristol-Myers Squibb. He spent 14 years at Affymetrix, , the DNA chip industry pioneer.

“Thane’s leadership of Miller Center has generated the highest return on any investment Karen and I have ever made,” said Jeff Miller ’73, MBA ’76, Santa Clara University trustee and chair of Miller Center’s advisory board. “As we move into the next phase in our journey, I am grateful to Thane for the platform he has created for future growth and success of Miller Center and its ever-expanding impact on the world."

Kreiner will remain with Miller Center until April 30, 2020. Santa Clara University is commencing a national search for the next executive director. Further information on the position is available through SCU's Human Resources website.

About Miller Center for Social Entrepreneurship
Miller Center for Social Entrepreneurship, located at Santa Clara University, has accelerated more than 1000 social enterprises since 2003. These collectively have improved, transformed, or saved the lives of over 400 million people in 100 countries. We help transform social ministries to more sustainable social enterprise models. We engage Santa Clara University students in research that helps social enterprises, leveraging our location in the heart of Silicon Valley and our Jesuit ambition to end poverty and protect the planet. For more information see https://www.millersocent.org/.

About Santa Clara University
Founded in 1851, Santa Clara University sits in the heart of Silicon Valley—the world’s most innovative and entrepreneurial region. The University’s stunningly landscaped 106-acre campus is home to the historic Mission Santa Clara de Asís. SCU has among the best four-year graduation rates in the nation and is rated by PayScale in the top 1 percent of universities with the highest-paid graduates. SCU has produced elite levels of Fulbright Scholars as well as four Rhodes Scholars. With undergraduate programs in arts and sciences, business, and engineering, and graduate programs in six disciplines, the curriculum blends high-tech innovation with social consciousness grounded in the tradition of Jesuit, Catholic education. For more information see www.scu.edu.