On Friday, November 21, Santa Clara welcomed Director Edoardo Ponti for a sold-out screening of two of his short films: The Nightshift Belongs to the Stars and Voce humana (Human Voice), featuring a riveting performance by his mother, Sophia Loren. To close the evening, Mr. Ponti offered a lively account of the making of both films and entertained questions from the audience, moderated by Vari Visiting Scholar, Valerio Ferme.

Mr. Ponti was on a national tour of the 23rd annual New Italian Cinema Events (N.I.C.E.) Film  Festival that included screenings in San Francisco, New York, Washington DC and Philadelphia. Through the Dr. Victor and Julia Botto Vari Italian Studies Initiative, Santa Clara collaborated with the County of Santa Clara/Province of Florence, Italy Sister County Commission to bring this event to campus after its San Francisco screening.  Last year, a similar effort brought La città ideale (The Ideal City) to Santa Clara in its effort to advance the goals of the Vari Italian Studies Initiative.

“Having Mr. Ponti at Santa Clara and watching his films was truly an amazing experience.  As always, I was very impressed with the professional and sincere collaboration of the Vari Italian Studies Initiative, the good folks at SCU Presents and the entire SCU community,” said Joanne Anderson, a member of the County of Santa Clara/Province of Florence, Italy Sister County Commission and an organizer of the event. 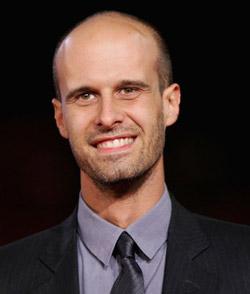 About the film: Human Voice

(25 minutes, in Italian with English subtitles)

Human Voice is inspired by Jean Cocteau's iconic one woman play of the same name. Set against the backdrop of Naples, Italy, in 1950, this romantic drama tells the story of Angela, played by Sophia Loren, a woman in the twilight of her years who rides the emotional roller coaster of her last telephone conversation with the man she loves as he is leaving her for another woman.

The legendary theatrical piece La Vois Humaine by Jean Cocteau, on which the film is inspired, has been performed for decades by the greatest actresses (ie. Anna Magnani) of their generation. It is the holy grail of acting, intimidating most actors for its demanding emotional range and separating the wheat from the chaff. It is now the turn of film legend Sophia Loren to take on the challenge, fulfilling a forty year old dream to inhabit that role. Director Edoardo Ponti helms the film. He teams up once again with world renowned and best selling Neapolitan writer Erri De Luca for the screen adaptation of the Cocteau piece, right on the heels of last year's award winning film The Nightshift Belongs to the Stars, short listed for the 2013 Oscars and winner of the 2013 Best Live Action short at the 2013 Tribeca Film Festival. The film features an all-star technical crew headed by Oscar-nominated director of Photography Rodrigo Prieto, as well as award winning production designer Maurizio Sabatini and costume designer Mariano Tufano.

About the film: The Nightshift Belongs to the Stars

(23 minutes, in Italian with English subtitles)

About to face heart surgery, Matteo (Enrico Loverso) and Sonia (Nastassja Kinski) share a common passion for mountains and they intend, after recovery, to climb one together in Trentino. Despite the fear of Sonia's husband, both for her health and for the possible development of her friendship with Matteo, the two protagonists manage to keep their promise.

Edoardo Ponti, son of producer Carlo Ponti and actress Sophia Loren, made his debut at age 11 in the film Something Blonde, playing alongside his mother. In 1994, he graduated in film directing and production, then made his debut in theater, producing and directing The Lesson by Eugène Ionesco, and the Griffin & Sabine trilogy by Nick Bantock. After being the personal assistant to Michelangelo Antonioni, he finally made his first short film Liv in 1998. In 2002, he wrote and directed his first feature film, Between Strangers. The Nightshift Belong to the Stars is his first feature in Italian.