It is a great honor for me, and a gesture of solidarity and support for the Universidad Centroamerica José Simeon Cañas, that Santa Clara University has decided to confer upon me this honorary degree.

I am sure you intend primarily, not to single out my intellectual activity, but to commend the academic and social work which our university has conducted for more than 17 years. Our university's work is oriented, obviously, on behalf of our Salvadoran culture, but above all, on behalf of a people who, oppressed by structural injustices, struggle for their self- determination--people often without liberty or human rights.

At present, as you know, the United States represents the major political force in Central America--and certainly in El Salvador. The social and political destiny of El Salvador, whether we like it or not, depends to a large extent on the United States government. It is therefore of the utmost importance that the United States carry out a foreign policy in Central America which is both informed and just. It must take into consideration the real interests of the American people. But more important for us it must respond according to the principles of political ethics, to the needs of a people who suffer misery and oppression, not because of their own fault or indolence, but because or a chain of historical events for which they cannot be held responsible.

Some North American congressmen are looking for just solutions for the Salvadoran problems though such solutions are, admittedly, difficult and risky. Some churches and religious groups, such as the Catholic Bishops of the United States, have exerted themselves on our behalf. They have pressed the present administration not to intensify our conflicts through military reinforcement, but to facilitate a just. negotiated solution.

But American universities also have an important part to play in order to insure that the unavoidable presence of the United States in Central America be sensitive and just, especially those universities--like Santa Clara--which are inspired by the desire to make present among us all the Kingdom of God.

In this task, our University, also, is engaged. We bear the name of a Salvadoran priest, José Simeon Cañas, who as a congressman in the Constitutional Assembly in 1824, moved and obtained the abolition of slavery in Central America. These are the words he addressed to the assembly: "I come crawling; and if I were dying, dying I would come to make a request for humanity. I beg before anything else that our slaves he declared free citizens. For this is the order of justice: that the deprived be restored to the possession of their goods, and there is no good more valuable than liberty. We all know that our brothers have been violently deprived of their freedom, that they grieve in servitude, sighing for a hand to break the iron chains of slavery. This nation has declared itself free; so, then, must all its people be free."

In 1863, Abraham Lincoln signed the Emancipation Proclamation, forty years after José Simeon Cañas, who was a priest, a scholar and a politician, obtained emancipation for the slaves of Central America.

In that same spirit of liberation our University works today. Let me say a word about how we understand ourselves so that you can comprehend and support us more responsibly.

There are two aspects to every university. The first and most evident is that it deals with culture, with knowledge, the use of the intellect. The second, and not so evident, is that it must be concerned with the social reality--precisely because a university is inescapably a social force: it must transform and enlighten the society in which it lives. But how does it do that? How does a university transform the social reality of which it is so much a part?

There is no abstract and consistent answer here. A university cannot always and in every place be the same. We must constantly look at our own peculiar historical reality. For us in El Salvador, the historical reality is that we are a part of the Third World which is itself the major portion of human kind. Unfortunately, the Third World is characterized more by oppression than by liberty, more by a terrible, grinding poverty than by abundance.

It may be difficult for you to understand our situation, because you are such a privileged nation but a minority of the human race. We, in contrast, have daily experience of this reality, and unremitting suffering which attest to it.

What then does a university do, immersed in this reality? Transform it? Yes. Do everything possible so that liberty is victorious over oppression, justice over injustice, love over hate? Yes. Without this overall commitment, we would not be a university, and even less so would we be a Catholic university.

But how is this done? The university must carry out this general commitment with the means uniquely at its disposal: we as an intellectual community must analyze causes; use imagination and creativity together to discover the remedies to our problems; communicate to our constituencies a consciousness that inspires the freedom of self-determination; educate professionals with a conscience, who will be the immediate instruments of such a transformation; and constantly hone an educational institution that is both academically excellent and ethically oriented.

But how can a university so shape itself, or come to understand itself and its social obligations? Perhaps, just a word.

Liberation theology has emphasized what the preferential option for the poor means in authentic Christianity. Such an option constitutes an essential part of Christian life--but it is also an historic obligation. For the poor embody Christ in a special way; they mirror for us his message of revelation, salvation and conversion. And they are also a universal social reality.

Reason and faith merge, therefore, in confronting the reality of the poor. Reason must open its eyes to their suffering; faith--which is sometimes scandalous to those without it--sees in the weak of this world the triumph of God, for we see in the poor what salvation must mean and the conversion to which we are called. 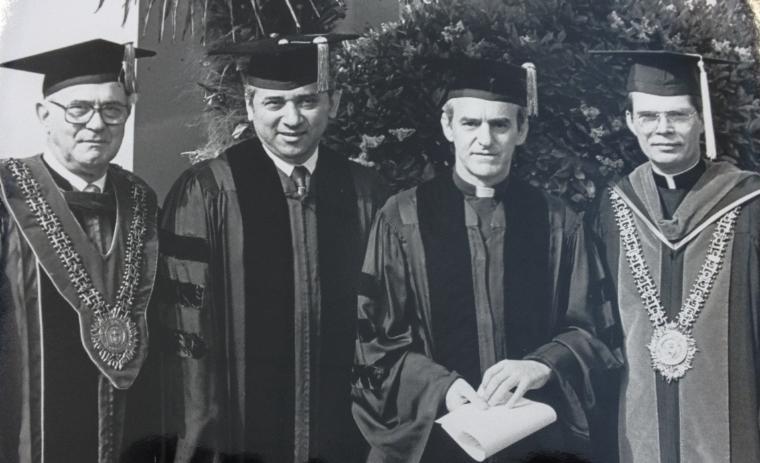 We have attempted to do this. In a modest way, we have made a contribution through our research and publications, and a few men have left far more lucrative positions to work in the University for the people.

We've been thanked and supported in our efforts. We also have been severely persecuted. From 1976 to 1980, our campus was bombed ten times: we have been blocked and raided by military groups and threatened with the termination of all aid. Dozens of students and teachers have had to flee the country in exile; one of our students was shot to death by police who entered the campus. Our history has been that of our nation.

But we also have been encouraged by the words of Archbishop Romero--himself so soon to be murdered. It was he who said, while we were burying an assassinated priest, that something would be terribly wrong in our Church if no priest lay next to so many of his assassinated brothers and sisters. If the University had not suffered, we would not have performed our duty. In a world where injustice reigns, a university that fights for justice must necessarily be persecuted.

I would like to think--and this is the meaning I give to this honorary degree--that you understand our efforts, our mission. something of the tragic reality that is El Salvador.

And how do you help us? That is not for me to say. Only open your human heart, your Christian heart, and ask yourselves the three questions Ignatius of Loyola put to himself as he stood in front of the crucified world: What have I done for Christ in this world? What am I doing now? And above all, what should I do? The answers lie both in your academic responsibility and in your personal responsibility.

I wish to thank again your Board of Trustees and your President Father William Rewak, for giving me the opportunity to present to you my testimony on behalf of a suffering, struggling, wonderful people. In the name off the Universidad José Simeon Cañas, I wish to thank you for the distinction you have given it through its president. I thank you for the solidarity and support this represents. I thank you also for the personal honor.

Not many of us doubt the generosity of the real American people. After this occasion, I do not doubt it at all.