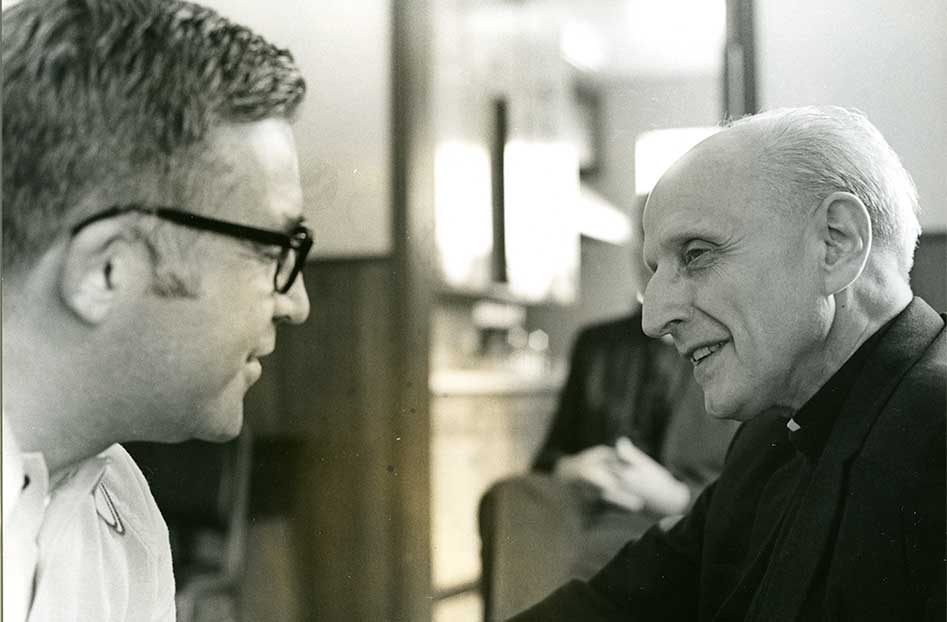 Above: Rev. Francis G. Parker, S.J., Father Minister and Executive Vice President of the Jesuit School of Theology at Berkeley, left, with Very Rev. Pedro Arrupe, Father General, Society of Jesus, right, during his visit to the school in May, 1971.

The Jesuit School was established in 1934, formerly named Alma College. Located in Los Gatos, California, it was founded to serve the needs of two Jesuit provinces, California and Oregon.

In February 1969, the school relocated to Berkeley to become one of the member schools of the Graduate Theological Union, adjacent to the University of California. In the same year, the school’s name was changed to the Jesuit School of Theology at Berkeley. In 2009, JSTB became integrated as a graduate school of Santa Clara University.

Today, JST is one of only two Jesuit theological centers in the United States. JST is an international center for the culturally contextualized study of theology and ministry, and admits students from all over the world. 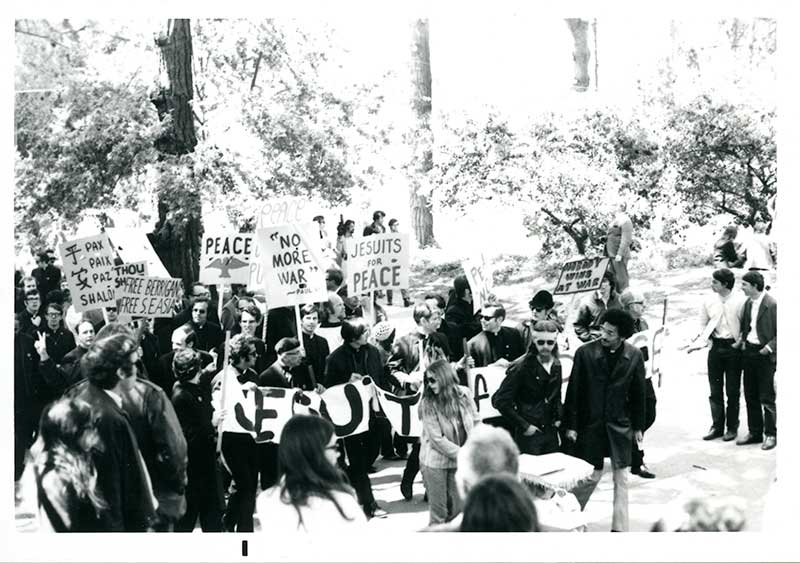 Jesuits March for Peace in Berkeley

The Society of Jesus or the Jesuits, for short, missions men in formation to the Jesuit School of Theology of Santa Clara University to complete theology studies or advanced degrees. JST is one of two Jesuit theologates in the United States where men in formation prepare for their area of ministry or for ordination. Some Jesuits attend JST after theology studies to pursue special studies in their academic or professional field. Distinctly Ignatian in mission and identity, the Jesuit School of Theology eagerly welcomes students from other religious communities as well as lay students into its degrees and programs.

Profile of the Society of Jesus

In 1540, St. Ignatius Loyola and his first companions founded a new type of Catholic religious order: the Society of Jesus. Recognized for their missions, schools, and formative way of praying known as the Spiritual Exercises of St. Ignatius, Jesuits and their co-workers embody a religious lifestyle and mission attuned to finding God in all things. The integration of contemplation, action, and intelligence for which Jesuits are famous permeates every aspect of its institutions, including the Jesuit School of Theology of Santa Clara University in Berkeley.

The Jesuit Community at JST

Association of Jesuit Colleges and Universities

Society of Jesus in the United States