Athletic Excellence on the Rise

Santa Clara University’s vision to enhance the prominence and achievements of its athletics program received a strong vote of confidence, with $25 million in gifts to build a state-of-the art Athletic Excellence Center.

SANTA CLARA, Calif., Nov. 13, 2018—As part of a drive to enhance and elevate the prominence and reputation of athletics at Santa Clara University, two multimillion-dollar gifts from alumni and longtime supporters of Santa Clara University will enable the University to build a 50,000-square-foot, state-of-the-art Athletic Excellence Center.

The planned two-story building will provide dedicated space for SCU’s Division I student-athletes to work out, train, practice, eat, and study together—while also opening up much-needed facility options for events and for all students participating in club and intramural sports. It will feature two practice gymnasiums; a 9,000-square-foot Bronco Bench Foundation Sports Performance Center; a 4,200-square-foot Stevens Academic Center with study rooms and computer space; a nutrition station; and an 8,000-square-foot sports medicine center.

"Thanks to the generosity of these amazing donors, who were Bronco student-athletes, this facility will be a 'game-changer' for Santa Clara Athletics," said Renee Baumgartner, director of athletics. "We want to provide the best experience for our student-athletes and this facility touches all facets of their development. This will help our coaches attract the most talented individuals and continue to shape them into Olympians, All-Americans, World Champions and Hall of Fame athletes. In addition, the extra gym space will have an impact on the entire student body’s ability to achieve its fitness and wellness goals.”

In all, the new facility triples the amount of space SCU’s student-athletes have for practice, academics, training, nutrition, and medical care—and puts the various centers under one roof for the first time.

“As a former athletic scholarship recipient, I am very pleased to contribute to this facility because I know it’s going to serve not just the athletes, but the entire student body,” said Stephen C. Schott. “I’m very happy to help inspire others to support the much-needed Athletic Excellence Center.”

The building, which is envisioned to break ground in 2019, will be located adjacent to the Leavey Center and close to Malley Fitness Center, creating an athletics corridor that captures the excitement of Santa Clara’s rising athletics program.

“This facility will also have signage and boards and displays featuring the history of athletics at Santa Clara,” said Mary Stevens. “This is going to be a showcase facility that will definitely help us recruit.”

“If you are going to build a quality Division I sports program these days, you need to have outstanding facilities, great coaching staff, a visionary athletic director, and support from the Board of Trustees and the administration—all of which are now coming together at SCU,” said Mark Stevens. “And you need to be able to recruit great students who are also great athletes. All these things reinforce themselves.”

The estimated $38 million cost for the building will be entirely funded by donors. The new facility will feature:

About the Schott family 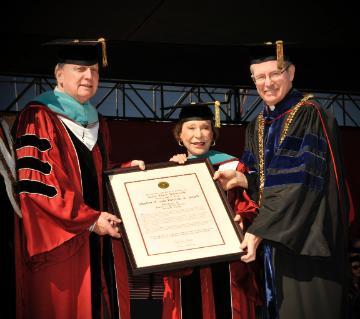 Stephen C. Schott ’60, Hon. ’13 has served on the Board of Trustees since 1988 and is owner and CEO of Citation Homes located in Santa Clara. A pitcher for the Broncos’ baseball team during his student days at SCU, he was inducted into both the Santa Clara University Athletics Hall of Fame and the San Jose Sports Hall of Fame in 2014. He is also well-known as a former managing partner and co-owner of the Oakland A’s.

Patricia A. Schott Hon. ’13 is an active board member for the Schott family’s philanthropic foundation, which supports Catholic education, youth, and other causes. She and her husband received honorary doctorates of public service from Santa Clara University in 2013.

The couple currently serves on the SCU Campaign Cabinet, which advises the University on its comprehensive campaign.

In 2004, Mr. Schott provided the lead gift for Santa Clara University’s 1,500-seat Stephen Schott Baseball Stadium, one of the premier college baseball stadiums on the West Coast, which opened in April 2005. The Schotts also contributed the lead gift for the Patricia A. and Stephen C. Schott Admission and Enrollment Services Building, which began welcoming visitors to the Mission campus in 2012.

About the Stevens family 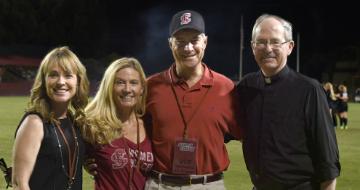 Mary Stevens ’84 has served on the Board of Trustees since 2012 and prior to that she served on the Board of Fellows for more than a decade. A soccer player while at SCU, Mary served on the president’s athletic Blue Ribbon Commission, which developed the strategic plan for Santa Clara Athletics. She spent 14 years in the commercial real estate industry in Silicon Valley.

Mark Stevens, an active philanthropist and former partner in the Silicon Valley venture capital firm Sequoia Capital, was an investor in some of the most successful tech companies of the past decades, notably Google and LinkedIn. Currently, he serves as chair on the Bronco Athletic Investment Fund and previously served on the University’s investment committee from 2009 to 2016.

The couple also serves on the SCU Campaign Cabinet, which advises the University on its comprehensive campaign.

Past gifts from the couple include: the Stevens Soccer Training Center; the Paul L. Locatelli, S.J., Student Activity Center; and scholarships for St. Mary’s Academy alumnae to attend SCU.

A web page for the new building is available here.