FOLIO awards for design and editorial excellence cap a year of national honors, including from Catholic Press Association, Council for Advancement and Support of Education (CASE), and more.

Santa Clara's alumni magazine cover took top honors in the publishing industry's OZZIE Awards. It's one of many national awards for Santa Clara Magazine this year.

SANTA CLARA, Calif., Oct. 26, 2018—In one of the top honors in the publishing industry, Santa Clara Magazine has earned an OZZIE Award for the best cover of any university magazine in the country.

FOLIO Magazine awards recognize editorial and design excellence and draw competition from major media corporations as well as independent publishers. Presented for more than two decades, they are include the EDDIE Awards, which honor editorial excellence, and the OZZIE Awards, which honor top design. Other winners this year included ESPN the Magazine, The Atlantic, Better Homes and Gardens, and AFAR. 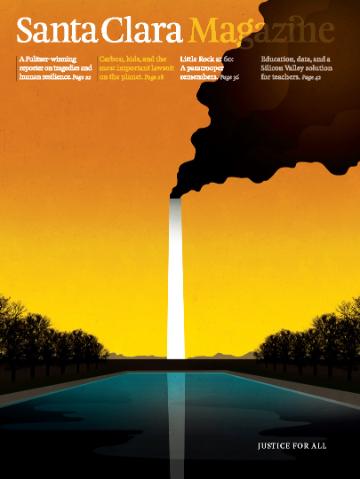 Santa Clara Magazine won the top cover award for its fall 2017 edition, which featured an illustration by artist Brian Stauffer on the theme “Justice for All.” Stauffer depicted the Washington Monument as a factory smokestack before an orange-colored sky—a spare and startling image. Stauffer regularly contributes work to The New York Times, TIME Magazine, The New Yorker, and other leading publications.

The cover feature story was by writer Deborah Lohse, “The Most Important Lawsuit on the Planet,” taking a deep dive into the case Juliana v. United States. The lawsuit is brought on behalf of 21 young people suing the U.S. government for understanding the dire consequences of climate change but pursuing policies that have worsened it.

The magazine also garnered a pair of honorable mentions in the EDDIE awards for editorial excellence:

The magazine also brought several honorable mentions in the OZZIE awards for design:

Setting “a Standard for the Entire Industry”

Santa Clara Magazine is no stranger to national awards this year.

In recent months the magazine was honored by its peers at other Jesuit universities as the top magazine published by a Jesuit university; and by the Catholic Press Association (CPA) with Alumni Magazine of the Year. CPA, which presented its awards in June, honored the magazine with 13 awards total, noting, “The bold and captivating design of this magazine is matched by equally strong writing and reporting.” 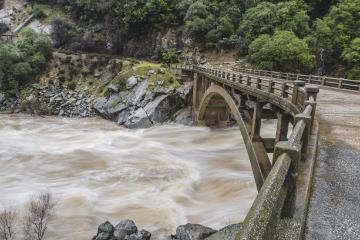 Also in June, the Council for Advancement and Support of Education (CASE) honored the magazine with three national awards: gold medal for best designed university magazine, gold medal for photography (for Robin Mayoff’s photograph of the Yuba River, Spring 2017), and a bronze medal for editorial design for “Cut & Paste Conservation” by Emma Marris with illustrations by Jason Holley. Judges for the design award lauded the combination of compelling content, thought, and energy that goes into each issue and surmised: “The result is a magazine that sets a standard for the entire industry.” 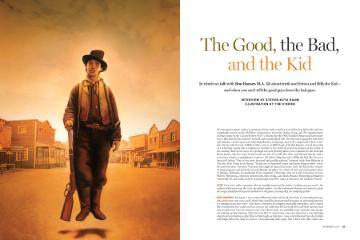 Santa Clara Magazine is published by Santa Clara University. The print magazine has a circulation of over 100,000. Subscriptions are offered free of charge to alumni and friends of Santa Clara University. Complimentary copies are available by request at https://magazine.scu.edu/scm/contact-us.cfm. The magazine is also about to launch a reimagined digital magazine—the biggest transformation for its online presence in more than a decade.

Before taking the helm at Santa Clara Magazine more than a decade ago, Saum served as editor-in-chief at The Commonwealth Club of California, where he founded the organization’s magazine and edited the collection of speeches Each a Mighty Voice. He has written for Orion, The Believer, Salon, and other publications, and he is a three-time champion on Jeopardy!

Leslie Griffy joined the editorial team in 2018. She is a journalist with extensive experience in print and digital, including The Mercury News and Chicago Sun-Times, as well as producing stories for radio.

An illustration by Jason Holley for Santa Clara Magazine's Spring 2017 edition was one of numerous entries to win national awards for excellence this year.