Professorship created with an initial bequest of $2,000,000 from Paul and Virginia Halmos.

Paul R. Halmos came to Santa Clara University in 1985 and was a professor here for 15 years. While at Santa Clara, Paul received the Yueh-Gin Gung and Dr. Charles Y. Hu Award for Distinguished Service, the highest award given by the Mathematical Association of America, in 2000. He also was the recipient of the Deborah and Franklin Tepper Haimo Award for Distinguished College or University Teaching of Mathematics in 1994. While Paul might be best known for his books on Measure Theory, Finite-Dimensional Vector Spaces, Naive Set Theory, while at Santa Clara he wrote I have a Photographic Memory, Introduction to Boolean Algebras, Linear Algebra Problem Book, Logic as Algebra, and I Want to be a Mathematician-An Automathography.

In 2005, Paul and Virginia made an initial bequest of $2,000,000 to create this professorship. An additional contribution was made from their estate in 2015.

The Paul R. and Virginia P. Halmos Professor will have a distinguished record as an expositor and mathematician, mentor and colleague, and a clear commitment to furthering the distinctive mission and quality of the College of Arts and Sciences at Santa Clara University. Preference will be given to a senior mathematics faculty member who integrates creative scholarship with teaching and with other areas of learning and who is collegial and collaborates with students and other faculty as a mentor.

Ami Radunskaya’s areas of expertise are mathematical modeling of tumor growth and treatment, dynamical systems and analysis of non-linear models of power systems. She is co-director of EDGE (Enhancing Diversity in Graduate Education) as well as the President of the EDGE Foundation. EDGE is a national program designed to increase the number of women students, particularly minority women, successfully completing graduate programs in the mathematical sciences.

As a former president of the Association for Women in Mathematics (2017-2019), one of Ami's goals is to build community between all types of mathematicians by supporting a unified network of members, and by paying attention to the needs of all members. Aspiring mathematicians don’t all have equal access to research opportunities, graduate school, internships, post-docs, jobs and recognition. As AWM President, she works within the association and with other groups to facilitate access to opportunities in mathematics. She hopes that the organization can use its collective strength to build and support a diverse mathematical community. 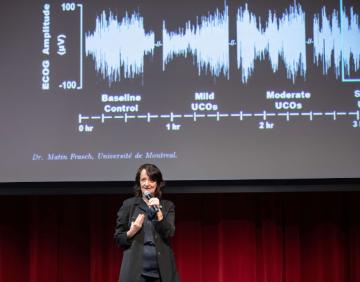 In 2014, she was featured in the independent film, The Empowerment Project: Ordinary Women Doing Extraordinary Things, a documentary that spotlighted positive and powerful women who are excelling in traditionally male-dominated fields as role models for young women beginning their careers.

During her time at Santa Clara, Ami taught a Mathematical Models course and gave a public lecture Fighting Cancer With Mathematics on Thursday, March 3, 2022.

The Halmos professor for 2020 was Carl Pomerance of Dartmouth University and the University of California at San Diego. Carl is a number theorist and is an emeritus professor at Dartmouth college. Like Tom Banchoff, Carl was the recipient of the Deborah and Franklin Tepper Haimo Award for Distinguished College or University Teaching of Mathematics.

His public lecture "Is 73 The Best Number?" was given at the MAA Golden Section Meeting at Mills College on February 29, 2020. He also taught a Theory of Numbers course during his time at SCU.

The first Halmos Professor was Thomas F. Banchoff of Brown University in 2018. Tom is a geometer and an emeritus professor at Brown University where he taught for 47 years. Tom was president of the Mathematical Association of America. He also received the Deborah and Franklin Tepper Haimo Award for Distinguished College or University Teaching of Mathematics.

While at Santa Clara, Tom taught a Survey of Geometry course, gave a colloquium on Cylinder vs. Mobius Band: Seeing the Difference and did research with our undergraduate students. 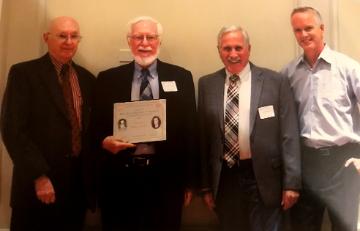