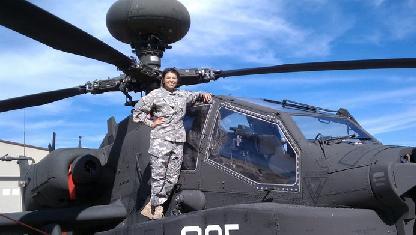 My name is 1LT Erika Garcia, Bronco Battalion Class of 2008. I had my first taste of Army life in the fall of 2005. I was a second year student at San Jose State University working on a Bachelor's of Science degree in Nursing. In all honesty I was not a fan of the nursing field, and decided it was time for a change. After a weekend of perusing different majors in my course catalog, I ran across a page that said "ROTC- Reserve Officer Training Corps." After reading the course description, I realized that this was a class that was geared at preparing a student to commission as an officer in the United States Army, while obtaining a college degree. I had always been interested in joining the Army, but knew that my biggest goal was to obtain a degree.

I had never heard of ROTC, never knew really what it was, and what all I needed to do to qualify, so I contacted a cadre member of the Bronco Battalion for some more information. After a meeting, in which any and every question that I could muster had been answered I was signed up for the MS I class- or Intro to Military Science class. Day 1 I was hooked. There was a sense of camaraderie in this class that I had never experienced in any college course that I had previously taken. We all wore the same uniform to class, all woke up dark and early for some good physical fitness training, and all learned about the Army and our role in it upon completing the requirements for a commission in the Army. After that one quarter of ROTC class, I decided that committing to ROTC was what I wanted to do, and the SCU cadre helped me do that. Through a series of planning and string pulling by the cadre I was able to attend basic training and AIT (advanced individual training), and returned to ROTC as a contracted 3rd year cadet. I was able to choose whatever major I wanted as an ROTC cadet, so I chose Social Work through San Jose State University.

My MS III and MS IV years in ROTC were the best years of my college life, though they were also the busiest. Obtaining a college degree is demanding enough on it's own, and participating in ROTC only added to the days in my calendar that were filled in. However, ROTC taught me to manage my time, taught me fundamentals of leadership, taught me to problem solve and work efficiently with my peers, and got me into the best shape of my life. In addition, ROTC afforded me the ability to participate in many extra curricular activities such as the Bataan Memorial Death March, held every year in White Sands, New Mexico; trips to Yosemite, whitewater rafting and more. ROTC also helped me develop life long friendships with my classmates.

While we have all gone our separate ways in the big scheme of things, I can honestly say that some of my closest friends are the ones that I attended ROTC classes with. I obtained a commission in the United States Army in June of 2008 as an Aviation Officer.I have since attended flight school in Fort Rucker, Alabama and was recently awarded Aviator wings. I am currently stationed in Fort Riley, Kansas, home of "The Big Red One," as a qualified AH-64D Apache Attack Helicopter pilot. Had I not come across that page titled "ROTC" in my course catalog back in the Fall of 2005 I would not be where I am today. Joining Army ROTC was one of the best decisions I have ever made. ATTACK!