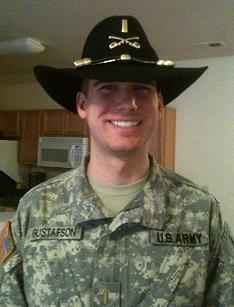 My name is Erick Gustafson and I am a 2nd Lieutenant in the U.S. Army. I am an XO at Fort Knox for an OSUT (one stop unit training) Cavalry Troop. OSUT is Basic Combat Training and Advanced Individual Training combined for privates going to become scouts or cavalry.

I helped my former unit shut down and move to Ft. Benning in December, and I will be doing the same with my current unit. Basically, property accountability is HUGE. In ROTC, this was stressed to me as a junior cadet and as a senior cadet I tried to stress this, even making one cadet low crawl for leaving his equipment unsecured. What is important to remember in ROTC is that sometimes punishments may seem to be harsh, but I guarantee that it is better to learn to keep your gear secured in ROTC and low crawl rather than learn that you are short 100 bed sheets and will need to pay for them (which happened to a commander for a different unit). Property accountability may come as part of the training for someone becoming a Quartermaster Officer, but for somebody in Combat Arms, it is just an implied task. As an officer, there is NO LIMIT to what you can be charged, so if you lose/damage $1 million worth of equipment, you better start playing the lottery. To sum it up: ROTC taught me property accountability and this has turned out to be way more important than I originally thought.

The more obvious answer is that ROTC taught me how to lead troops, and it did, but I don't think anybody would be surprised by that. If you figured out a way to lead and be respected in ROTC, you will be fine in the Army (it might not necessarily be the same leadership style, but you just have to tweak it). If you aren't respected and leading comes as a challenge, don't worry yet, since ROTC is your time to figure this out, but I would start studying effective leaders much more closely.