High profile outside performances at Dolby Labs in San Francisco, Linux Audio Conference at Stanford University, and Garden of Memory in Oakland brought SCLOrk -- the Santa Clara Laptop Orchestra -- to entirely new audiences and raised the visibility of Santa Clara University in the music technology industry and electronic music scenes.

SCLOrk -- the Santa Clara Laptop Orchestra -- had a busy season. With seven concerts, three of them off-campus, the 2018-19 academic year represented a new stage in the life of this unique ensemble. High profile outside performances at Dolby Labs in San Francisco, Linux Audio Conference at Stanford University, and Garden of Memory in Oakland brought SCLOrk to entirely new audiences and raised the visibility of Santa Clara University in the music technology industry and electronic music scenes.

In January 2019, SCLOrk kicked off the year collaborating with the High Tech Law Institute (Santa Clara Law School). The concert was the closing event of the Public Domain Month celebration. Through a mini-lecture with copyright law expert Prof. Tyler Ochoa and performance of an original laptop orchestra piece, the audience was invited to reflect upon Copyright Law, Public Domain, and their impact on creativity and musical borrowing.

Blending old and new, engaging with the present

Later in the Winter, SCLOrk performed at our traditional Music @ Noon concert series, where students had the chance to present their own original compositions for the group. In the Spring, students self-organized to put together yet another Music @ Noon performance where they were responsible for every aspect of the performance, from rehearsals and logistics all the way to actual performance. SCLOrker Jia Seow '22 wrote a poem titled "from nowhere" and in collaboration with her peers created a piece highlighting the Asian-American and third-culture experience. The group also engaged with current campus events by creating a piece in support of SCU adjunct faculty who are trying to unionize.

A smaller, "chamber" version of the orchestra also performed with the SCU Choirs concert in the Mission church. In a piece by Swedish composer Jan Sandström originally composed for two choirs, SCLOrk played the part of the second choir using Wiimote controllers to shape the sounds. Acoustic voices and electronic sounds blended together in lush harmonies built on top of an ancient setting of a Christmas carol by Renaissance composer Michael Praetorius. 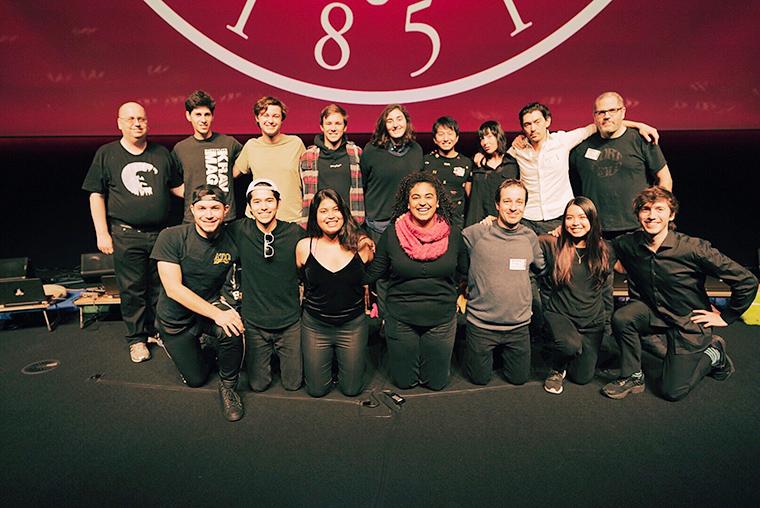 The highlight for students in SCLOrk was a March 14th road trip to San Francisco to perform at Dolby Laboratories. In this SCU capital campaign event hosted by Dolby, SCLOrk was the main feature for the evening. Students received a private tour of the amazing music studios at Dolby. In the post-concert reception, SCLOrkers had the privilege to connect with other SCU alumni attending the event, including Dolby's CEO and CFO, both of whom are Santa Clara graduates!

The last concert of the Winter was at the Linux Audio Conference. After seven years outside of the United States, the 17th edition Linux Audio Conference (LAC) took place at Stanford University on March 23-26, 2019. LAC is the international conference about Free/Open-Source Software for music, sound, and other media with GNU/Linux as the main platform. SCLOrk, as a Linux-only laptop orchestra, showcased the possibilities of making electronic music in an ensemble setting. The beautiful CCRMA stage at Stanford's Center for Computer Research in Music and Acoustics was filled to the brim with an attentive audience made of local and international computer music experts.

The capstone of 2018-2019 season was an inspiring concert at Garden of Memory. This annual event is a columbarium walk-through held every June 21st to celebrate the solstice at The Chapel of the Chimes in Oakland, California. Dozens of musicians performed simultaneously occupying every corner of the beautifully labyrinthic Chapel. SCLOrk performed two extended sets of one hour each, which listeners described as "magical" and "healing".

To learn more about SCLOrk, please visit this page. You can get in touch with SCLOrk director Bruno Ruviaro using the contact form on his faculty profile page.

SCLOrk performing ambient soundscapes at the Chapel of the Chimes in Oakland.