Opening Doors and Opening the Mind

We use it to hear, see, smell, talk, walk, eat, sleep, think, and feel. We rely on our brain for everything, yet there is so much we don’t know about this incredible organ. “There are many important discoveries still to be made about the brain,” said Patti Simone, PhD, Director of the new Neuroscience Program now offered through the SCU College of Arts and Sciences.

Beginning with the 2017-2018 academic year, students from all majors and departments are now able to take one of the four courses currently offered within the program. Simone teaches courses in Psychology and Neuroscience and was a lead figure in the creation of the Neuroscience Program.

There are currently 54 students declared as Neuroscience majors, 30 of whom switched over from different majors and 24 first-year students who entered SCU with this new major. Before the creation of the new program, students could pursue a major in Psychobiology, a concentration offered in the Psychology Department since the 1980s and the closest offering to Neuroscience. Compared to Psychobiology, which Simone describes as “more challenging academically than the Psychology major,” Neuroscience is a multidisciplinary science major, with an emphasis on both physical and social sciences.

“The human brain is such a powerful, mysterious, and delicate organ, and its handling, inspection, and study should be done with care,” said Class of ’17 alumna Christina Egwim, who was the first to initiate a major in Neuroscience at SCU.  Instead of choosing to follow the Psychobiology path, she worked with advisors from various departments to create a solid Individual Studies major.

After noticing a significant increase from five to six Psychobiology majors a year to about 20 students a year, Simone and other faculty members decided it was time to reevaluate the demand for neuroscience. Simone was selected to be a part of a multidisciplinary team to examine neuroscience programs at other universities. “Before hiring neuroscientists in biology and psychology, we had to ask the question: Did it make sense for Santa Clara to create this Neuroscience major?” she explained.

The team spent several months exploring neuroscience programs at other universities, ultimately proposing to move forward with developing the major suited to SCU. During this time, Simone worked alongside Christelle Sabatier, PhD, from the Biology Department, who is now the Assistant Director of the Neuroscience Program. As a member of the nationwide club “FUN,” or Faculty for Undergraduate Neuroscience, and instructor of Neurobiology at SCU, Sabatier was a perfect addition to the team.

Together with Brian McNelis in the Chemistry & Biochemistry Department, Sabatier and Simone were two of the many professors who guided Egwim’s Individual Studies major. Egwim is thrilled that the University is expanding neuroscience opportunities available to students.  “I am excited to see what incredible accomplishments the Neuroscience students achieve now that these resources are available to them,” she said.

One of the Neuroscience-specific courses that will be offered in the spring will be set up as a seminar class in which students will have the opportunity to hear from speakers who study and work in this field. Among many hot topics in neuroscience today are chronic traumatic encephalopathy (CTE), the genetic basis of mental illness, and optogenetics -- the use of light to control cells, which has been called one of the most momentous developments in the field of neuroscience.

“Neuroscience is changing so fast right now,” Sabatier said while discussing how she hopes students will leave this program feeling confident in their ability to evaluate the changes ahead.  “Our challenge as instructors is to train students to know how to approach new information in the field.”

Sabatier and Simone both stressed the importance of incorporating research and internship opportunities into the program. “This major opens up doors; it doesn’t close doors,” Simone said. Egwim is living proof of just that.  The first student to graduate Santa Clara University with a Neuroscience major will begin her position as a Research Assistant at the Stanford/VA Clinical Aging Research Center later this month. 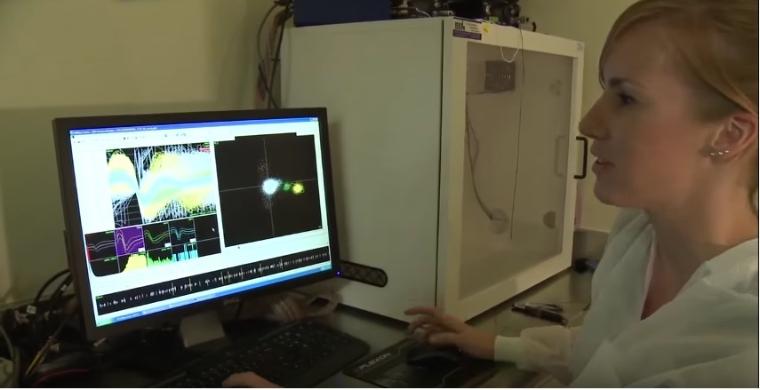 Lindsay Halladay, Assistant Professor in the Neuroscience Program, views 'in vivo electrophysiology' data, which is one of the main research techniques she uses with her students. In vivo electrophysiology allows the recording of individual neurons during various behaviors, illustrating how neural circuits mediate 'normal' and aberrant behaviors. 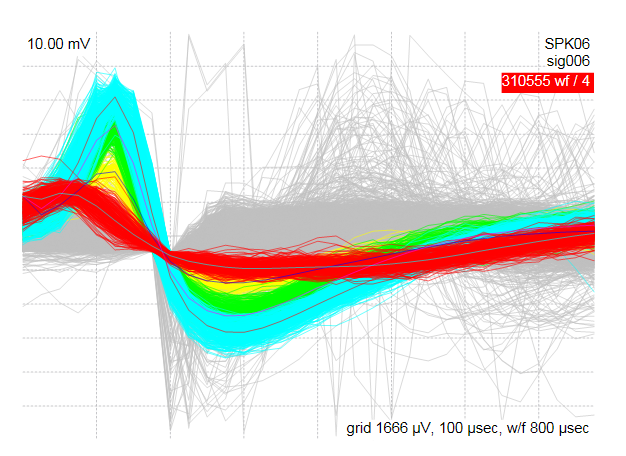 Screen shot of an actual neural recording of neurons firing action potentials. Image shows electrical signals from 4 different neurons (4 colors) that were captured on one recording electrode. Each neuron has a unique waveform (shape of its action potential, or "firing") that enables the differentiation of neural signals coming from individual cells.