Established in 1925 in honor of William H. Leahy by his wife and his brother, James, this prize is awarded to the graduating senior who has made the greatest contribution to dramatic art at Santa Clara as determined by the members of the Department of Theatre and Dance.

This award honors the extended creative and socially active career of Anna Halprin, a pioneer in the art of dance. This award is given to the graduating senior dancer who best exemplifies excellence in dance and an awareness of community values while at Santa Clara University.

This annual award, established in 1989 in honor of Charles Lampkin, the late actor and University artist-in-residence, is given to the junior or senior African-American student who has demonstrated excellence and commitment to performance in theatre, music, dance, or television.

The Quinn Martin Scholarship was established through the gererosity of Mr. Quinn Martin, television producer, to assist students seriously intent on a career in any of the Theatre Arts -- acting, directing, script-writing, design, or production for stage, film, or television. Awarded annually, the Scholarship carries partial tuition for the Junior year, with renewal for the Senior year so long as special and general scholarship requirements are fulfilled.

Alpha Psi Omega is the national theatre arts honor society founded in 1925 at Fairmont College. Chapters are called "casts," and the Alpha Gamma Psi cast at Santa Clara University was started in 2000. Alpha Psi Omega has sponsored the formation of theatre honors societies with the aim of encouraging dramatic production at every step in a person's academic career. The Alpha Gamma Psi cast provides an opportunity for student leadership and a regard for academic excellence and active participation in the Department of Theatre and Dance. Members must accumulate a minimum of 75 points by active participation in two Theatre Arts disciplines and maintain an appropriate cumulative GPA. 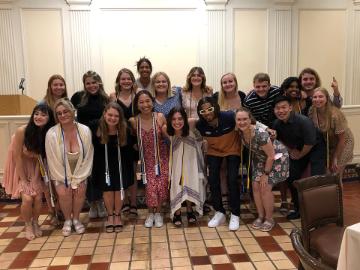