Acknowledging an Ugly Past in Hopes of a Compassionate Future

While some may shy away from drawing similarities between Nazi Germany and Japanese-American internment in Northern California, senior lecturer Renee Billingslea (Art and Art History) does not. Her passion for acknowledging ugly truths and sharing the story of those without voices comes to fruition in her project “Ten Japanese-American Concentration Camps.”

Billingslea’s call to this topic only came a few years ago, but she has carried an attitude of compassion and curiosity since her early school days in Ms. Thompson’s third-grade class. “Ms. Thompson, a name most likely not her birth name, was Japanese-American,” Billingslea says. “At the time, she most likely did not have a voice to discuss her feelings of injustice and frustration from being incarcerated by her own government.”

Reminiscing about Ms. Thompson’s kind and daring attitude, she remembers lessons grounded in love and tolerance of all people and cultures, rather than ones steeped in residual anger from being treated as a prisoner by the country to which she pledged her allegiance. In the spirit of these lessons, Billingslea distinctly remembers Ms. Thompson gathering students around a bowl of dried fish and rice, happy to expose the class to her culture.

This compassionate sharing of culture is contrasted with an ironic tinge evident in the photographs taped to Billingslea’s office wall—photos she took of original prints from the Farm Security Administration collection in the Library of Congress—that capture an assembly center in which Japanese-American citizens received ID numbers shortly before the “resettlement camps” began. The photos, depicting people who received hot dogs with chopsticks and had smiles spread across their faces, were taken in San Juan Batista and San Benito County—not so far from Santa Clara University’s campus.

The slow emergence of conversation about the race-based imprisonment that took place in our own backyard during the 1940s, along with the little-acknowledged scope of the imprisonment, nagged at Billingslea. “Someone should do something to bring all ten of the camp locations together in one venue so people can realize the whole impact,” noted Billingslea. With the support of a grant from the Center for the Arts and Humanities, she became that someone. “I see myself—as an artist, as a citizen, and as a professor—as being a storyteller. That’s my calling. When something just starts eating at you, like that picture and that story, when I’m constantly thinking about it and what it means, usually that means I’m supposed to take an action of some sort, and so I did.” 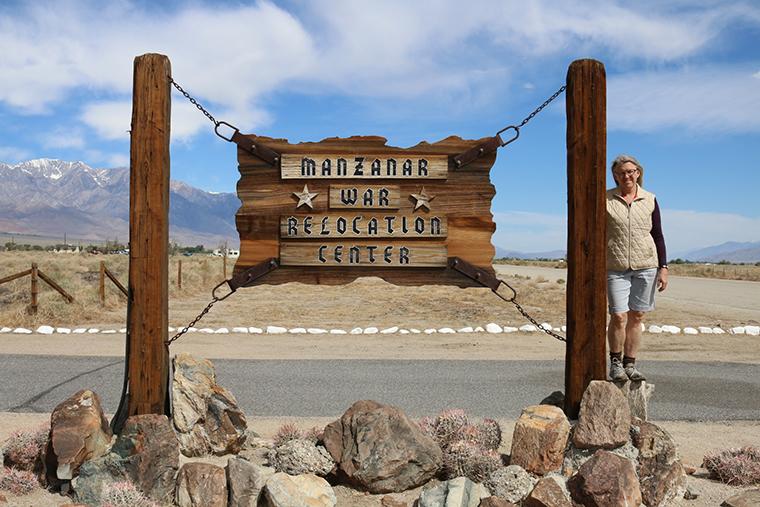 Striking out with a story to tell, Billingslea travelled to each of the ten locations that held concentration camps to photograph the present-day landscape. Additionally, she collected archival photos taken when the camps were inhabited. These old photographs, taken by the War Relocation Authority (WRA), served as propaganda during their time. “Basically the WRA’s job was to take images to prove that what was going on [in the camps] was really okay,” said Billingslea. “My idea in going to the locations was to see what the land is like now, and what scars remained of the camps.”

Using gold thread to hand-stitch together two periods of time, Billingslea overlapped the archived photographs with the present-day ones, creating a fluid depiction of the campsites—then and now. The use of gold thread was inspired by the Japanese practice called Kintsugi, which translates to “golden journey” or “golden repair,” in which broken pottery is mended using powdered gold. “The idea is that the vessel is not the same—it becomes something different,” remarks Billingslea, hopeful that although what was done cannot be changed, we may make amends to restore beauty and goodness in the world. Enhancing the experience of connection to the land itself, she brought soil samples back from the locations she travelled to (when allowed) to be displayed below the photographs. 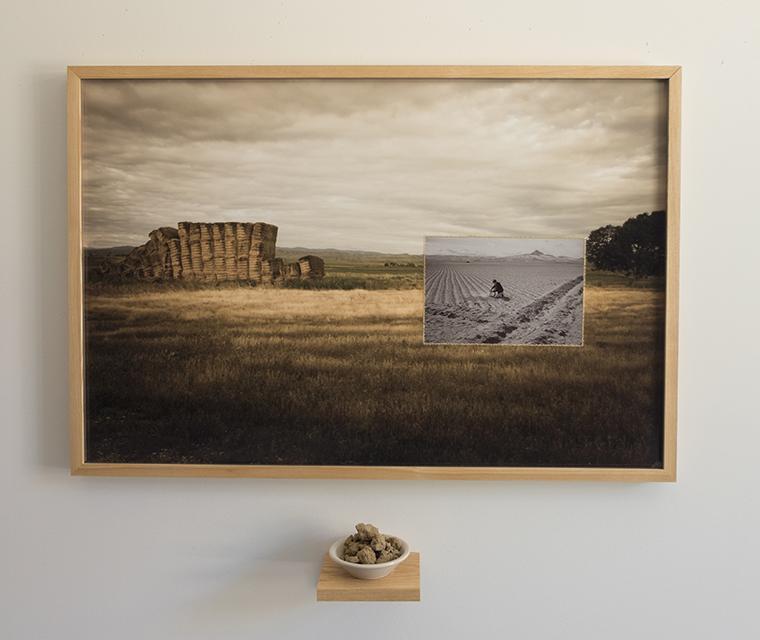 Through this project, Billingslea hopes to spark curiosity and conversation about the tragedies of the past, and reflect on how we can be better in the future. In reference to comparisons drawn between the Holocaust and the Japanese imprisonment, Billingslea remarks, “it’s all connected, it’s not separate. It’s easier to think about it that way, but it’s not.” Because it is uncomfortable to acknowledge this part of our country’s history, she reinforces the importance of speaking out through art. “We just don’t have the language—teachers are not always equipped to take on these big issues, and so art can play a big role in that.”

“Ten Japanese-American Concentration Camps” will be displayed at the Triton Museum of Art from Feb. 8 to Apr. 19, 2020. It will also be featured in the educational forum, “Representations of Persecution in Nazi Germany and Northern California,” Feb. 19-20 which is co-sponsored by the U.S. Holocaust Memorial Museum, the Triton Museum of Art, and Santa Clara University.